Experts: Armenia-Azerbaijan Conflict Is Christian Genocide Under the Pretext of War 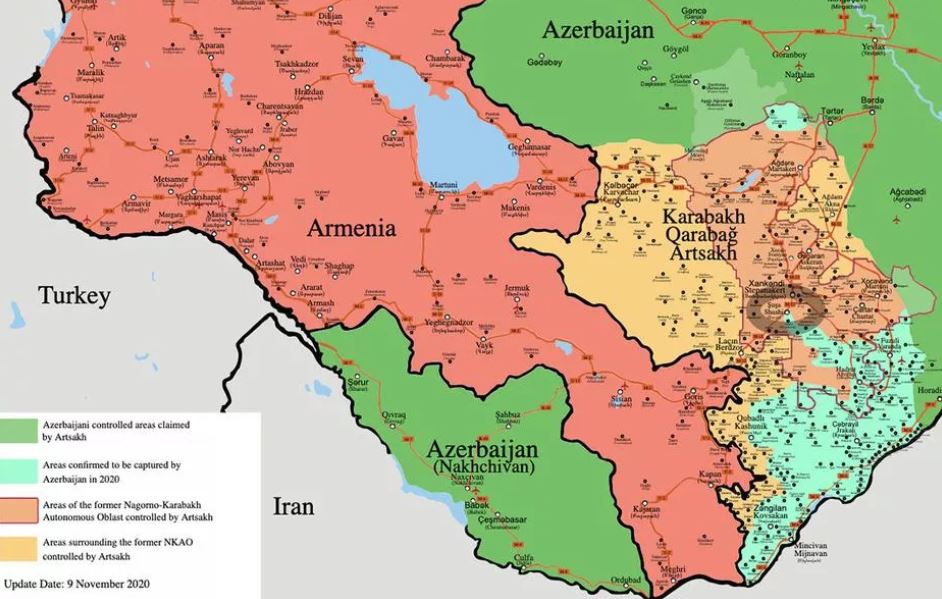 Experts: Armenia-Azerbaijan Conflict Is Christian Genocide Under the Pretext of War

NEWS ANALYSIS: Memories of the genocide at the hands of the Ottoman Turks 100 years ago are still fresh.

Under the cover of a global pandemic, benefiting from U.S. self-absorption during the presidential election, a battle that raged for 44 days against a compact community of Armenians — some 150,000 people territorially enclosed by Azerbaijan — has ended.

The region under siege is widely known as Nagorno-Karabakh, but its citizens voted to call it the Republic of Artsakh in 2017.

Describing it as an “unspeakably painful agreement,” Armenia’s prime minister signed a peace deal Nov. 9 with the aggressor, Azerbaijan. In Yerevan, Armenia’s capital, people responded by rioting in Parliament, while people danced in the streets in Baku, Azerbaijan’s seaside capital.

Long- and short-range missiles, internationally banned cluster bombs, suicide drones and mercenaries brought by Turkey from Syria overwhelmed the Armenian side. Evidence of crimes against humanity has emerged: Azeri soldiers filmed themselves shooting a wounded soldier in the head. Hospitals were targeted as well as churches.

The Congressional Armenian Caucus Nov. 10 demanded accountability for war crimes committed by Azerbaijan and Turkey against Artsakh and Armenia.

Pope Francis pleaded for dialogue between the two countries following the Angelus prayer on Nov. 1, three weeks after he prayed for a truce. But at that time, the aggressors did not yet have a coveted prize, the town of Shushi (or Shusha), which was secured by the Armenian side in a 1994 cease-fire of hostilities that raged for two years.

On Nov. 8, Azerbaijan announced the military takeover of Shushi, strategically located, culturally treasured and still scarred by a massacre instigated by Azeri troops against the majority Armenian community in 1920. That’s when Azerbaijan stopped fighting.

To educated observers and the victims themselves, this year’s aggression has all the markings of an ongoing Christian genocide: initiated by Ottoman Turks in 1895; intensified by the Young Turk Movement between 1915 and 1923; continued against Greeks in the 1950s; and now reignited as part of Turkish President Recep Tayyip Erdogan’s dream of restoring Ottoman power and territory.

Evidence of genocide is especially petrifying to the Armenians because it suggests Azerbaijan and Turkey will not stop until they’ve “cleansed” this cradle of Christianity of its indigenous people.

Proof of the connection is startlingly overt: When Azerbaijan dropped a bomb on Oct. 8 through the dome of Shushi’s Holy Savior Cathedral (known to Armenians as Ghazanchetsots), one of the largest Armenian churches in the world, they targeted a sacred place damaged in the notorious 1920 attack when Azerbaijani soldiers set the Armenian half of the town on fire, killing, raping and driving out its inhabitants.

This past is hidden, and the intentional obliteration of Armenia’s Christian culture denied, by the powerful family that has controlled Azerbaijan for two generations, the Aliyevs.

To comprehend this new threat of ethnic cleansing and its geopolitical implications, the Register listened to and consulted experts assembled by In Defense of Christians (IDF) a Washington-D.C. based organization.

Robert Avetisyan, Artsakh’s designated representative to the United States, describes forces arrayed against the new state as a “triple unity” comprised of neighboring Azerbaijan, Turkey, and international terrorists transported by Turkey from Syria. He sees Turkey, with NATO’s second-largest army after the U.S., as “instigating attacks and pushing Azerbaijan,” which prepared for war by spending its “easy oil money stockpiling state-of-the-art arms and drones to use against us.”

Although Turkey is not mentioned in the peace deal, President Reytip Erdogan publicly declared that Turkey and Azerbaijan, both once part of the Ottoman Empire, are “two states, one nation,” while Artsakh belongs to Azerbaijan’s “occupied territories.”

Speaking to the Registerby phone from Artsakh, Avetisyan contended that Turkey brought extremist mercenaries from Syria “by the thousands” to fight, making it a conflict “between Artsakh and international terrorism.” He said the population withstood a veritable “blitzkrieg” of weaponry.

Another regional actor in the mix is Israel, Azerbaijan’s main weapons’ supplier. Last month, Armenia withdraw its ambassador to Israel to protest its support for the Azeri arms buildup. (Between 2016-2019, Israel sold $625 million worth of arms to Azerbaijan, compared to Turkey’s direct sales of $32 million.) The convergence of interests between Israel and Azerbaijan relates to Israel’s ongoing conflict with Iran. Iran borders Azerbaijan to the South; Baku gave Israel access to its airfields for potential use against Iran, according to Israeli sources.

While the U.S. Congress overwhelmingly passed a resolution recognizing the Armenian genocide last year, Israel has not recognized it. Azerbaijan and Turkey adamantly reject it ever happened.

Pope Francis was the first pope to publicly recognize the mass murder of Armenians as the 20th century’s “first genocide” in June 2016.

Asked about Turkey’s motives, American Enterprise Institute defense analyst Michael Rubin is blunt: “primarily, animus toward Armenians as a people and Christianity as a religion.”

Rubin told an IDF news conference that Erdogan has no historical claim to Artsakh and no security excuse for fomenting war. Besides being anti-Christian, his motives are political and nationalistic: “Turkey is on the warpath, and it will get worse as Erdogan deflects attention from his failing economy and nears the anniversary of the Turkish republic” founded in 1923.

Aram Hamparian, executive director of the Armenian National Committee of America, summarized, “What’s at stake here is Erdogan trying to finish the work of 1915.”

Recounting the Armenian peoples’ losses at Turkey’s hands as “two-thirds of our people and nine-tenths of our territory,” Hamparian reframed the current situation in the South Caucasus as “not a conflict but a crime,” requiring a swift response from the West.

A representative of the Greek American community agreed. “We’re approaching the centennial of a republic built on the bones and blood of Christian minorities. Today, Artsakh is an inconvenience to Turkey’s idea of dominance in the region,” said Endy Zemenides, executive director of the Hellenic American Leadership Council.

For Zemenides, the U.S. government should immediately impose sanctions on Turkey, triggered by Ankara’s violation of the Countering America’s Adversaries Through Sanctions Act (CAATSA). The 2017 law is directly related to Russia, but Turkey violated CAATSA when it took delivery of a Russian-made S-400 air defense system in August 2019.

“It’s time to hold Turkey accountable because, if that’s not done, Turkey believes it can get away with everything it’s doing in Artsakh right now,” Zemenides told the Register. Last month, seven U.S. senators introduced legislation to investigate human-rights violations by Azerbaijan and Turkey “throughout the South Caucasus.”

Hamparian said not only does the U.S. need to condemn Azerbaijan’s crimes, it needs to end all military aid to the rogue nation: “Even as bombs are falling on Artsakh, they are getting aid!”

Several experts also insisted that the vast network of highly-paid Washington lobbyists working on behalf of Turkey and Azerbaijan should be named and shamed. Zemenides described them as following the maxim, “Whatever money can’t buy, more money can buy.”

Artsakh official Avetisyan believes recognition of the republic’s very existence would be most beneficial, a scenario comparable to American recognition of Kosovo as an independent state in 2008 in order to blunt Serbia’s designs on destroying it. Rubin sees this as a way to give the U.S. government a familiar model. Rep. Grace Napolitano, D-Calif., has called for recognition of Artsakh.

But advocates told the Register they ran into a wall when they tried to get the U.S. State Department to acknowledge the unfolding disaster for Armenians in the South Caucasus — with Washington preoccupied by the presidential election.

Although France, Russia and the United States issued a joint statement calling for a halt to regional “hostilities” last month, it was hardly convincing. The three nations comprised the triumvirate that mediated a truce in 1994, under the auspices of the Organization for Security and Cooperation in Europe (OSCE). In fact, this month’s peace agreement signed by Russia, Azerbaijan and Armenia excluded the U.S. and France from future participation, de jure and de facto.

Against the assumption that Iran would line up with Azerbaijan based on religion — Azerbaijan is one of the few countries where, like Iran, the Muslim majority practices a form of Shiite Islam — in fact, Iran is sensitive to Armenian culture.

AEI’s Rubin explained to the Register, “When I lived in Iran, I lived in the Armenian quarter of Isfahan. The Armenians settled in Isfahan more than 400 years ago, after Shah Abbas I forcibly relocated them there. The area was dotted with Armenian churches, Armenians groceries and posters marking the commemoration of the Medz Yeghern [Great Crime, as Armenians call the 1915-23 genocide]. The Persian or Iranian shahs always interacted with Armenians, understood and appreciated Armenian culture, and even took prominent Armenians to be their trusted advisers. Likewise, Russia and Armenia have always had cultural affinity — and Armenia, of course, hosts a Russian military base.”

“Tehran and Washington need not be friends or allies to find mutual interest in countering Baku’s aggression,” Rubin continued. “Aliyev showed his true colors by bringing in Turkey and Turkish-backed Syrian mercenaries. Wherever Turkey’s Syrian mercenaries go, al Qaeda and the Islamic State follow, and so this highlights common interest.”

“What I am saying is that many countries can see what is happening to Armenia is wrong and work to reverse it, even if they agree on nothing else. That’s what diplomacy is all about,” Rubin said. He also believes that within the American policy-making establishment, “people have woken up to the threat of Turkey.”

Regarding Azerbaijan, the AEI analyst explained, “Azerbaijan long had friends because of its post-2001 anti-terror cooperation, but the fact that they now link up with Syrian mercenaries to attack Christian villages and churches suggests that they are no longer a security partner.”

Heydar Aliyev, a member of the Soviet Politburo and high-ranking KGB official (according to the CIA), ruled Azerbaijan from 1993 until his death in 2003. (The first contemporary suppression against Armenians occurred in 1988.) His son, Ilham, inherited the country — and an offshore network of mega-wealth built from corruption, according to the International Consortium of Investigative Journalists. Three years ago, President Aliyev appointed his wife first vice president.

Rubin said, “They are nothing more than just another family-run dictatorship in which the United States need not have a continuing interest.”

Exorcisms and the popes: Stories f...

Our Lady of Akita’s Alleged Appari...