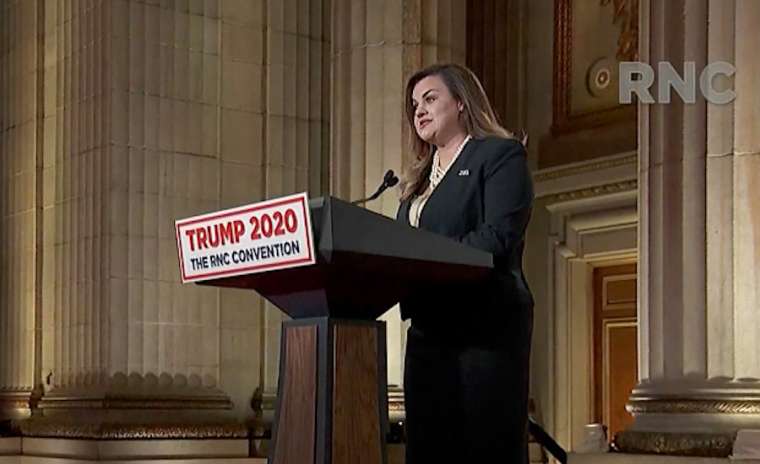 Faith and social issues took center stage on night two of the Republican National Convention, as speakers said the Trump administration had worked to advance the cause of religious freedom, promoting pro-life causes, and criminal justice reform.

Trump, she said “has done more for the unborn than any other president” and is “the most pro-life president we’ve ever had.

Johnson graphically described a second-trimester abortion she says she witnessed while working for Planned Parenthood, saying that she saw “an unborn baby fighting back, desperate to move away from the suction … The last thing I saw was a spine twirling around in the mother’s womb before succumbing to the force of the suction.”

Seeing that abortion, she said, caused her to quit her job and leave the abortion industry.

Most Americans, said Johnson, do not understand the “barbarity” of abortion.

“They don’t know about the ‘products of conception’ room in abortion clinics, where infant corpses are pieced back together to ensure nothing remains in the mother’s wombs; or that we joked and called it the ‘pieces of children’ room,” she said.

“See, for me, abortion is real. I know what it sounds like. I know what abortion smells like. Did you know abortion even had a smell?” Johnson herself had two abortions prior to her pro-life conversion.

In her speech, Johnson referred to Biden and Harris as “two radical, anti-life activists.” The Democratic Party platform called, for the first time, for abortion to be codified in federal law, and repeated the 2016 platform’s call for a repeal of the Hyde Amendment forbidding taxpayer dollars for abortions.

The Republican Party has not changed its the 2016 platform, which calls for abortion to be illegal, but did release a list of 50 bullet points outlining the priorities of a second term of the Trump presidency. Those points do not mention abortion policy, though Johnson emphasized that in her view, Trump’s second term will feature continued efforts on restricting legal protection for abortion.

Cissie Graham Lynch, the granddaughter of evangelist Billy Graham, spoke Tuesday night on the importance of the free exercise of religion “in our schools, and in our jobs, and yes, even in the public square.”

“Our founders did not envision a quiet, hidden faith: they fought to ensure that the voices of faith were always welcomed; not silenced, not bullied,” she said. Lynch said that during the Obama/Biden administration, “these freedoms were under attack.”

Lynch cited the examples of the HHS contraceptive mandate, which she said was an attempt to “force religious organizations to pay for abortion-inducing drugs,” and efforts to force adoption agencies to violate their religious beliefs in who they worked with.

“Democrats pressured schools to allow boys to compete in girls sports and use girls locker rooms,” she said, referring to transgender activists. “Those are the facts.”

With the election of Donald Trump, she said, “people of faith suddenly had a fierce advocate in the White House,” noting that he appointed judges who “respect the First Amendment” and withdrew policies that violated conscience rights.

“The Biden-Harris vision leaves no room for people of faith,” Lynch said. “Whether you’re a baker or florist or a football coach, they will force the choice between being obedient to God or to caesar–because the radical left’s God is government power.”

One of the more emotional moments of the night was the story of Jon Ponder, a convicted bank robber. While in prison, Ponder turned his life around through a chaplaincy program. Upon release, Ponder founded a nonprofit organization Hope for Prisoners, and befriended the FBI agent who arrested him.

“My hope for America is that all people regardless of race, color, class or background will take advantage of the fact that we live in a nation of second chances,” said Ponder on Tuesday. Trump called his story “a beautiful testament to the power of redemption.”

At the end of the segment, Trump pardoned Ponder for his bank robbery conviction, which is a federal crime. Ponder had previously been granted clemency in Nevada on battery charges.

Also featured on Tuesday night was Nick Sandmann, who, as a student at Covington Catholic High School, was the subject of a media firestorm after an out-of-context clip went viral showing him smiling at a Native American demonstrator in front of the Lincoln Memorial after the March for Life earlier this year. Sandmann spoke on the topics of cancel culture and the need for media accountability and honesty.