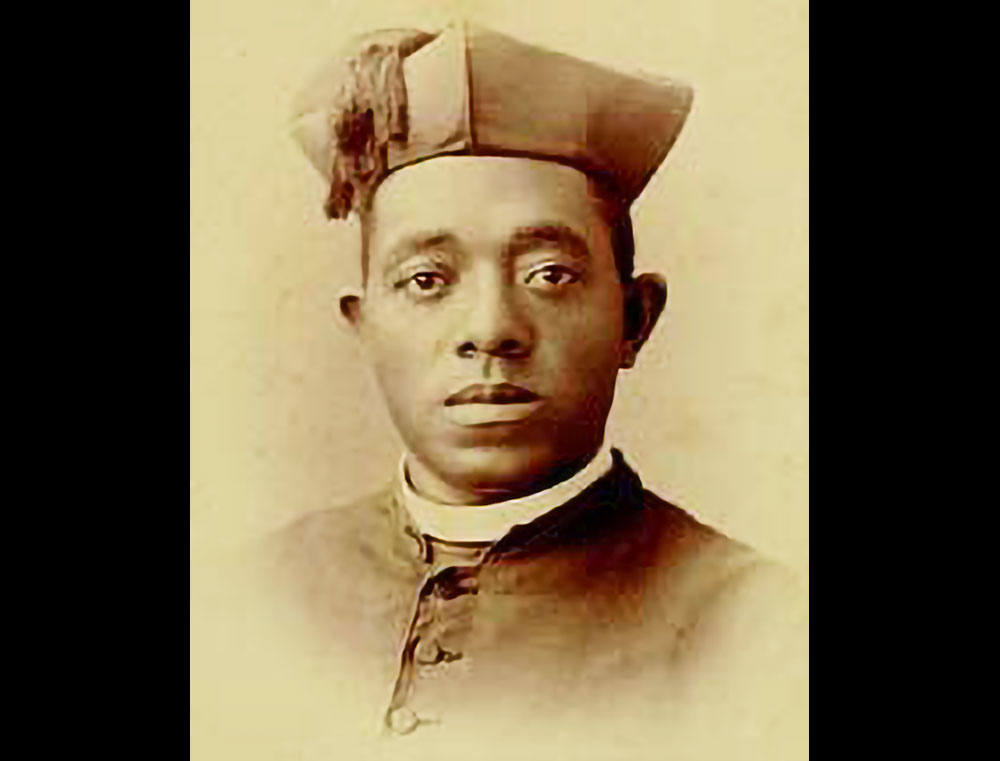 Father Tolton was declared venerable in 2019.

Father Augustus Tolton is considered, along with the Healy Brothers, among the very first African American priests in the United States. He had won his freedom first by flight and his priesthood by perseverance.

He was born on the Hagar farm in Bush Creek, Missouri, in 1854. His parents were both slaves of Catholic families and had been married in the Catholic Church — the same St. Peter’s where Augustus and his two siblings were baptized. When the Civil War broke out in 1861, his father ran away to fight with the Union. Several months later, his mother, Martha, decided it was time for her and the children to also seek freedom. They ran through several nights to the Mississippi River and Hannibal, Missouri, where they were about to be apprehended by Confederate soldiers before two Union soldiers stepped in to defend them. That night they took an old row boat across the Mighty Mississippi while the Confederates shot at them from shore.

They settled in Quincy, Illinois, a major stop on the Underground Railroad. Here they joined the closest Catholic church, the German parish of St. Boniface. Augustus and his mother both worked at the Harris Cigar Factory. When Augustus was 14, the pastor of the Irish parish, St. Peter’s, invited the boy who could barely read to enroll. But Father McGirr and the sisters who ran the school knew they needed to prepare both parents and students for the school’s first black student. It worked.

“As long as I was at the school, I was safe. Everyone was kind to me,” Father Tolton recalled years later.

He also learned to serve Mass. From the time he was 14, he served Mass every morning before going to work or school. At 16, he made his First Communion and started to think about the priesthood. The priests who knew him also saw a future priest in the dedicated, pious young man.

After he finished his basic education at 18, Tolton received the help of Father McGirr, who began to help him find a seminary. They started with the Franciscans who had a monastery in a nearby town, but they were the first to reject Augustus. Next, the Irish priest wrote to the bishop of the diocese in Alton about Augustus becoming a diocesan priest. Bishop Baltes was willing to have him and the diocese would cover his seminary expenses.

All Father McGirr had to do was find a seminary. He wrote to every seminary in the country and all gave him the same answer: We aren’t ready to accept a Negro. For the time being, local priests tutored Augustus privately in between his work at both the cigar factory and as a janitor at St. Peter’s. He also found time to help start a Catholic school for Blacks. It seemed the Mill Hill Fathers in England might accept him at their seminary, but it later became clear they thought he should stay in America. Bishop Baltes then appealed to the Urban College in Rome, but this international seminary also suggested that Augustus attend seminary in the United States. No one understood how impossible that was. Finally, a second appeal to the Urban College through the Franciscans lead to Augustus’ acceptance.

In Rome, he was “Gus from the U.S.,” loved by his fellow seminarians and admired for his deep spirituality by his teachers. After his ordination in 1886, he was sent back to the diocese of Alton, Illinois. In his first year, he took over the school he had founded and also created a flourishing parish at St. Joseph’s, attended by both blacks and whites. His time in Quincy, though, was short-lived. A year later, the diocese got a new bishop and the neighboring parish, St. Boniface, a new pastor who was jealous of the success of the black priest next door. He wanted nothing less than for Father Gus to leave.

“There is a German priest here who is jealous and contemptuous,” Augustus wrote in his second report to the Propaganda. “He abuses me in many ways and has told the bishop to send me out of this place. I would gladly leave here just to be away from this priest. I appealed to Bishop Ryan and he also advises me to go elsewhere.”

Rome wrote to Bishop Ryan for an explanation.

“Father Tolton is a good priest, but he wants to create a kind of society which is not feasible in this place,” was the bishop’s explanation.

Augustus’ superiors at the Propagation told him to accept Archbishop Feehan’s invitation and to go to Chicago “at once.” In Chicago, Father Gus was made pastor of all Black Catholics in the city. He built the first Catholic church in a Black neighborhood and wore himself out ministering throughout the city. He died of complications from heat stroke on July 9, 1897. He was buried in Quincy at his request.

He was declared venerable in 2019. Now his canonization cause needs one miraculous healing worked through his intercession to be approved by Rome in order that he might be beatified.