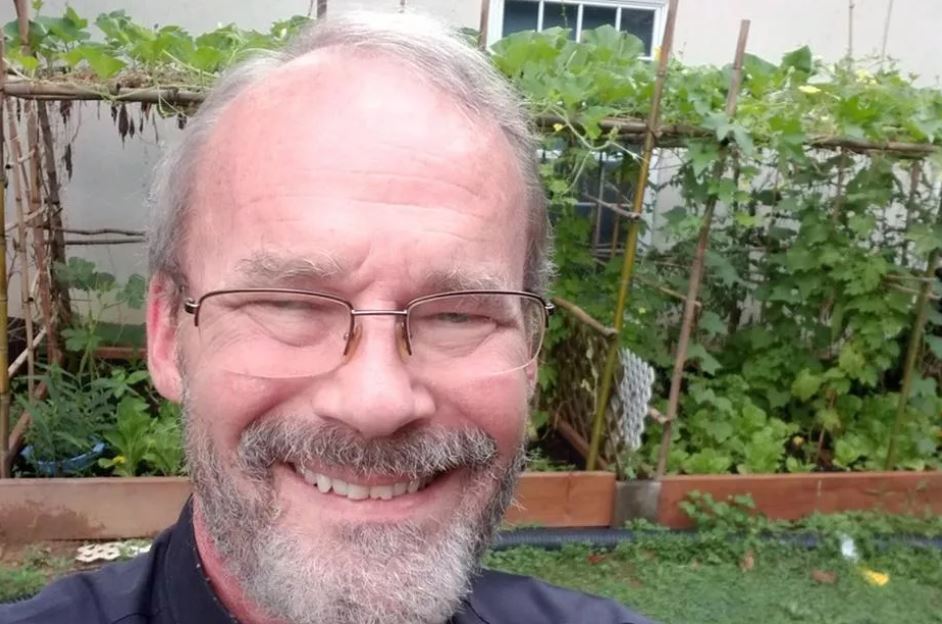 “The sense of sharing a meal,” says Father Whitestone, “is an act of love, of service to another … an experience of love.”

A self-professed passionate gardener and cook, Father David Whitestone, a native of Northern Virginia, serves as pastor at St. Leo the Great Catholic Church in Fairfax, Virginia. A son in a devout Catholic family, Father Whitestone remembers the confluence there of different cultures and Catholic traditions as well as non-Catholic cultures and traditions.

“Many of my great-grandparents were immigrants,” he said. “My father’s family was a combination of Jewish immigrants from Germany as well as immigrants from England, Scotland and Ireland, both Catholic and Protestant. My mother’s grandmother came to the United States shortly before the Russian Revolution and were Orthodox. We grew up experiencing all those traditions, a mixture of faith and cultural backgrounds. Most settled ultimately in Virginia, so we had a Southern aspect as well. We never knew what to eat: country ham with red-eye gravy or pierogies and cabbage rolls.”

Father Whitestone noted that one of his greatest gifts from his mother was her cookbook of all the old family recipes from Ireland, Russia, Germany, rural Virginia and West Virginia. “All those recipes,” he said, “connected us to each other and to the past. And this enables us to pass it on to future generations.”

He found in his family a sense of communion and sharing, especially at mealtimes. “The sense of sharing a meal,” he said, “is an act of love, of service to another. And when that is offered and then received, it is an experience of love. That is the heart of our Catholic faith. Christ gives and we accept.”

He remembered a family funeral of a Jewish cousin married to a Catholic. At the gathering at their home afterwards a rabbi was present. They sat together at mealtime, a Friday during Lent, and the meal consisted of scallops wrapped in bacon, crabmeat and ham sandwiches. “The rabbi couldn’t eat the shellfish or the pork, and I couldn’t eat shellfish (because of an allergy) and I could not eat the meat because of Lent,” he said, “so we shared a salad, and that brought us together. What sometimes seems to divide us can actually bring us together.”

Father Whitestone attended Catholic schools, and remembering when the nuns and priests visited the classroom, he experienced an inner sense of spirituality. After attending Bishop Ireton high school run by the Oblates of St. Francis De Sales, he chose to enter the seminary, attributing the decision to an inner voice calling him to serve and give his life to Christ and the example of Pope St. John Paul. “I was a junior in high school when John Paul was elected pope and his clear and bold proclamation of hope and fidelity to Christ inspired me. I have never doubted my choice,” he said, adding that he spent two years in Rome at the Gregorian University to study canon law.

And maybe that is when his passion for cooking really expanded. “The food was great there,” he said. “All those who worked where I lived were from Italy. I remember Thanksgiving meals at the house for American priests — the staff did not understand how to prepare a traditional Thanksgiving meal. It was a comedy of errors in a way, but they tried so hard and we loved them for trying. They would not eat any of it”

Years later and assigned to a parish with an outside garden, Father Whitestone lives out his cooking dream by growing fresh vegetables and herbs out back. “I am blessed now to have an additional parochial vicar here from Vietnam. I am the king of the tomatoes and herbs, but he is the master of the bitter squash, pumpkins and lettuces,” he said, adding that digging into the ground is humility and sharing in God’s creativity. “To do that hard work, to till the soil, to be patient and watch things grow; that is an act of love. When I cook with what I grow, it is all about using creative energy, time, and patience and sharing with another. That is what life is meant to be.”

Selecting a favorite recipe, he said, means thinking about his parents and grandparents, and cooking is praying for their souls and asking them to pray for him. “I love cabbage rolls,” he said, “and this morning I made peach ice cream to share with the rectory staff … and yesterday I made a pot roast. I went to market to buy toothpaste and found meat on sale at half price. A sign from God.”

This is a family recipe from Father Whitestone that in its original format contains no ingredient amounts or measurements. As Father noted, “Experiment. See what tastes good to you and your family and then start a new tradition. … Play it by ear and be open to the spirit.” However, these are his own measurements: 1 or 2 heads of cabbage, 1 egg, 1 lb. ground beef, 1/2 lb. hot ground sausage, 1/2 cup rice (uncooked instant), 1 onion, 2 tablespoons caraway seed, 1 can or package of sauerkraut (drained), 1 tablespoon brown sugar (optional).

Drop cabbage in pot of boiling water. Let boil 10 minutes then remove and carefully detach as many leaves as you can. Return head to boiling water and continue until all leaves are removed. Mix raw beef, sausage, uncooked rice, egg, chopped onion, some caraway seed (1/2 to 1 tablespoon). Fill middle of each cabbage leaf with mixture. Fold in sides. Then away from you then towards you. Press in your hands to form then place in large pot with a little water (1/2 to 1 ½ inches) in the bottom. Continue until mixture is used up. Pack rolls in tightly. Chop any remaining cabbage and onion; form balls of any left-over meat mixture. Place in pot and add sauerkraut or a little vinegar. Add a little caraway seed (maybe a tablespoon or so). Bring to a boil then cover, lower heat and simmer 2 or 3 hours.

Choose a College With a Discerning...