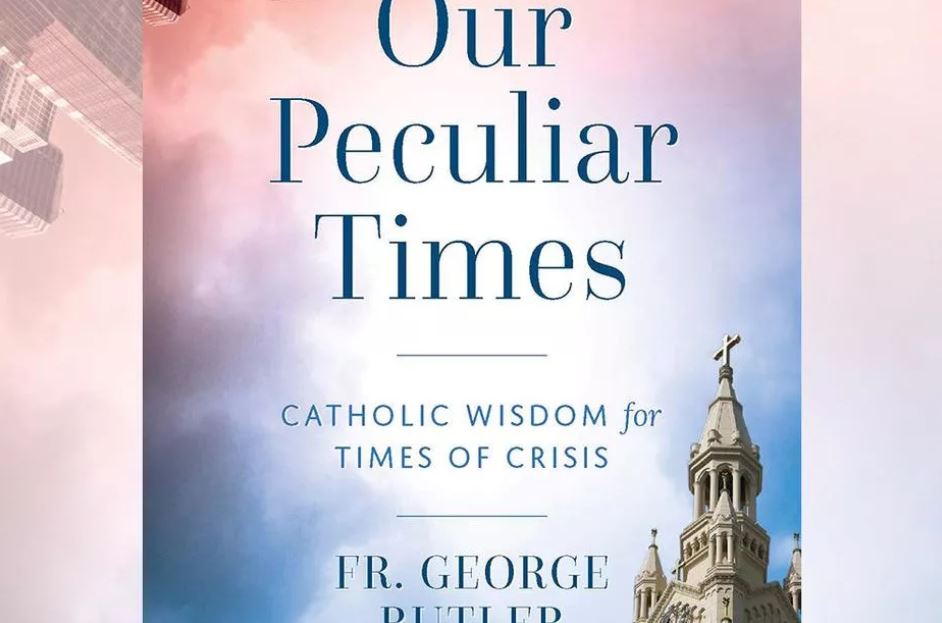 “We exist, but we only begin to live when we do the will of God. That is holiness.”

“And men from the east and west, from north and south, will come to take their places at the feast in the kingdom of God.” (Luke 13:29)

One does not have to visit long with Father George Rutler to discover that he is a man of remarkable talents, including his great intelligence and learning, sophistication and zeal. Born in 1945, he is an Ivy League graduate, musician, painter, art historian with an extensive collection, sportsman, long-distance runner, writer and lecturer.

But most centrally, he is a Catholic priest. He utilizes every opportunity and medium at his disposal to preach the Gospel to people from all walks of life throughout the world. Soundly rejecting the idea that only priests and nuns can be saints, he stresses that God calls all men, religious and laity alike, to holiness.

Father Rutler is the pastor of the Church of St. Michael in New York City and the author of numerous books — most recently,Our Peculiar Times: Catholic Wisdom for Times of Crisis(Sophia Institute Press, 2020). Among his many involvements, for 10 years he served as chaplain ofLegatus, an organization for Catholic CEOs, which brought him to Newport Beach, California, where he spoke to this writer about the universal call to holiness.

How does a man attain holiness in his life?

There is the simple, old, venerable counsel: Do what you’re doing, but do it God’s way. Don’t seek the exotic, just do the ordinary things of daily life in the service of God, in the name of God, in union with God. Ordinary things. It is not a matter ofdoinggood, but ofbeinggood…

Sanctification is accomplished by living ordinary life in the joyful service of God, letting God do with us as he will. Sanctity is not philanthropy. You can be a philanthropist and not a saint. It is not a question of doing, but being.

I always think, when I come to Orange County (California), that there is such a temptation to delusion here. The climate is so lovely and things are so clean, that one can live an artificial life easily enough, and try to insulate oneself from reality. True, we shouldn’t be puritanical. If people have material comforts and the good fortune of living in a nice area, they should thank God and use it for his good. But we run the danger of lukewarmness, not challenging ourselves, lapsing into a spirit of indifference.

The great danger is when people say, “I just want to feel good about myself.” God didn’t come into the world to make us feel good about ourselves. We have to challenge ourselves, our souls and bodies. Light mortification in simple ways.

How can we grow in holiness? We have to mortify ourselves, letting our bodies be our servants rather than our masters. That is why the Church talks about little things like abstinences and fasts, while offering our day to God. We must be willing to do things that might not make us comfortable or feel happy about ourselves.

It is a particular danger here in Orange County that people might build a human paradise at the expense of their eternal paradise.

Is the only truly happy man a holy man?

I suppose there are temporarily happy people. You can be deluded. I was a chaplain in a mental hospital. There were a lot of people there who thought they were happy. But they were under sedation!

Saloons have happy hours. And there are people who are happy with what they’re doing.

But that is a limited kind of happiness because they have limited their potential. It doesn’t really work. That is why people become bored, restless and dissatisfied. And they should be. They have everything they’ve always wanted, but there is still something missing. The Church requires that a saint show joy in order to be declared a saint. But joy is more than ordinary happiness, joy is happiness in the possession of one’s good.

Material happiness is ever-changing like weather. Spiritual joy is more like climate, it is there all the time. Instant in season and out-of-season. The saints suffered much in many ways; they’ve had all kinds of tests. But the joy is always there because it is not based on immediate satisfaction of their senses.

I’ve met a few orthodox Catholics, active in the external practices of their religion, who struck me as angry, bitter or deluded people, without the joy of which you speak. What happened to them?

Orthodoxy is not enough. The Pharisees were orthodox in their religion, but they missed the whole point of it — divine union. Sometimes people can use religion as a means of sublimating neurosis, their interior unhappiness with themselves.

There are many things to complain about. The Church is going through tremendous trials. There are many problems, neglects and crimes being committed in the Church; much faithlessness and abuse of the Faith.

Our Lord wept over Jerusalem. But he wasn’t neurotic about it. He wept out of love, and he had a solution. Orthodoxy is not enough. You have to live the Faith. You have to be supernatural and confident in God’s grace. Our Lord did not tell us to go out into all the world and bash the heretics. He told us to go out and preach the Gospel.

How can a man know God’s will in his life?

Our Lord himself, in his human nature, had to work that out. What did Our Lord say in his agony? Not my will, but thine be done! But it is quite clear that the very fact that he said this shows he knew this was the Father’s will. We don’t have that perfect inspiration. So we simply have to make ourselves available to God. Be faithful day-by-day. Our Lord says that we have to be faithful “in season and out of season.” Whether we feel like it or not. If one maintains the precepts of the Church, God leads the soul.

… He’s not telling us not to make plans, but that if we live each day in time, then his will will be shown to us. If we had everything we had wanted as a child, we’d probably be dead now. God preserves us, in his mercy, from seeing everything he has planned for us — all the great things, because we probably wouldn’t want them now. A child wouldn’t want great things … Part of civilization is to teach us to appreciate things which are more than just what our immediate senses want at the moment. That is even true in the life of grace.

This is the theory. In the practical implementation, we must follow the precepts of the Church; something we’ve neglected. I frequently remind people of the importance of confession. We’re never going to grow in holiness unless we have confession. The neglect of the Sacrament of Penance is at the heart of the lukewarmness now in the life of the Church.

Comment on the following statement from John M. Janaro’sFishers of Men: “In previous times lay people were not sufficiently encouraged to seize hold of their own role in the life of the Church, while in the contemporary situation some priests think that in order to involve the people in the Church they have to put them at the altar doing specifically priestly functions. Both attitudes, Father Rutler insists, deny the value of the unique task of the laity to evangelize the world from within.”

Clericalism is the idea that the priests are the first-class citizens of the Church and everyone else is a second-class citizen. That is contrary to the will of God. The great Cardinal Newman, for instance, when asked “What good are the laity?” responded, “The Church would look very odd without them.”

Priests serve the people in the role of sanctification. Sanctification means doing God’s will. When the pope says become what you are, he’s saying that we all have vocations. We exist, but we only begin to live when we do the will of God. That is holiness. It is not exotic, but the most ordinary thing of all. It is rare, however, because so few people take their vocation seriously.

The Church has always taught this belief; that is why there are so many lay saints. In fact, there was only one parish priest who was declared a saint, St. John Vianney himself.

Particularly in this country, we have a bureaucratic model of the Church. The Church is the chancery. The Church is the rectory. When priests try to get the laity involved, they find themselves stuck with this model. “How are we going to get the lay people involved in the Church? We’ll have them be extraordinary ministers, put them around the altar.” … Their technical title is extraordinary minister, because this is not their ordinary role. In fact, we’ve abused this very much. There’s no need for them in this country at all …

There’s a certain clerical servitude of the laity which thinks that the role of the laity is to help the priests. That’s just the opposite of what is should be. This attitude has a downward-spiraling effect on the priesthood. Once we confuse people about who the priest is and what he does, very few men who have a legitimate vocation to the priesthood will act on it. They’ll ask, “Why do I have to be a priest?”

The job of the priest in the sanctuary is to provide the grace for the people to go out into the world. There is the sacred space in which the priest stands before God interceding on behalf of the people. The people are not passive because they are in the pews. They are there representing themselves, their daily lives, their families, along with the priest’s sacrifice.

Now, in this stage, we have to de-clericalize again, recover a sense of the mystery of the Eucharist and of the legitimate vocation of the people, which is to take the Gospel into the marketplace, into homes and wherever they work. That, incidentally, is the function ofLegatus.

Now that presence was a more eloquent sermon than anything a priest could have preached. If she had heard the priest, she would have said, “That’s his job.” But when she saw someone actually doing it in her own sphere, then she was changed. That’s the unique influence of peer evangelism.