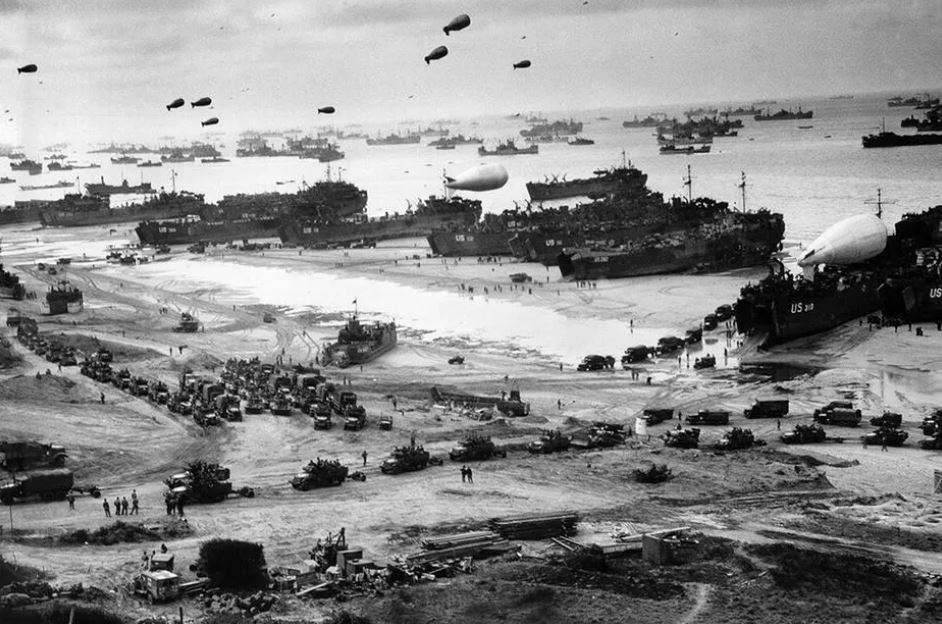 “Carrying the Blessed Sacrament was my protection.”

World War II ended 75 years ago with the surrender of Japan announced by Emperor Hirohito on the Feast of the Assumption, Aug. 15, 1945, and the subsequent signing of documents onboard the USS Missouri in Tokyo Bay on Sept. 2. More than 16 million Americans served in uniform during the conflict, including 3,200 Catholic priests, or one of 10 in the U.S. at the time.

One such priest was Divine Word Father Henry Marusa (1906-1997), a U.S. Army chaplain who hit Omaha Beach in German-occupied Normandy, France in 1944, with the second wave of Allied invaders, and was nearly killed multiple times in the following weeks.

One of Eight Children

Father was one of eight children, born “just a couple of yards away from the wooden Slovak Church” in Cleveland, Ohio. Slovak was his mother tongue, but Father Marusa would go on to become fluent in several other languages, as well as English.

Later, when Father Marusa’s family migrated to Parma, Ohio, he became acquainted with the town’s Jesuit priests. There he had his first experience as an altar boy.

Father grew up with the certain knowledge that he wanted to be a priest. He was determined to become a missionary and wanted to get started in his vocation right away, but the Jesuits accepted boys only after eighth grade.

The Order of the Divine Word, however, founded by Blessed Arnold Janssen 145 years ago, accepted novices at a younger age, so Father Marusa entered the seminary after sixth grade. He was in the seminary 14 years before being ordained — four years of high school, three of college, one in novitiate, two of philosophy and four of theology.

Father claims the distinction of being the first SVD to respond to the call for chaplains after the U.S. entered the Second World War.

In January 1942, the month following the bombing of Pearl Harbor by the Japanese, the missionary volunteered for the U.S. Navy. However, in the first week of May, he received enlistment papers from the Army. Later, Father Marusa was offered the chance to rectify the mistake and to sign up for the Navy instead. He declined and never regretted it.

“It must have been providential,” he said, emerging unscathed from his four years in the army. That does not mean, however, that he never encountered danger. Even the story of his landing at Normandy is harrowing.

After reaching the beach under the cover of darkness, the exhausted troops laid down on the sand and slept. Suddenly, they heard a familiar noise: the drone of a German plane flying overhead. Light flooded down as photographs of the drowsy soldiers were snapped. Later, Father recalled, “When I got up in the morning, I found I was sleeping next to a dead soldier!” The man had been shot by the enemy during the landing.

As a Catholic chaplain in the midst of battle, Father Marusa came face-to-face with death many times. He carried no weapons. Although chaplains are not allowed to fight, they are very much in the thick of the fighting.

The bloody and violent images of the war remained in Father’s mind for the rest of his life. While walking in the woods, he remembered seeing one dead soldier dangling from a tree, the back of his head shot off. He also recalled seeing U.S. ships and mine sweepers blown up in front of him.

He remembered one dead soldier who was found with a pile of grenades on his chest. Giving no thought to the probability that the pins had not been pulled, the men carefully tied a rope around the deceased man to drag him from the spot. Immersed in combat, they were cautious at all times.

Father Marusa saw his best friend killed on his first day in Normandy. Father Edelen, a chaplain in another regiment, stepped on a land mine and later bled to death from a broken leg.

In another incident, a German shell ripped through an American tank not far from where Father Marusa stood. As a shell-shocked survivor leaped from the tank, Father jumped in to anoint the driver who had died.

Father recalled giving absolution constantly — both to his own men and the enemy: “That’s why a priest is a chaplain in the Army. He’s a pastor of souls under adverse circumstances.”

These adverse circumstances applied to Father Marusa as well as to the men to whom he ministered. He had many close calls. At one point, when the priest and his driver found themselves the target of German snipers, they leaped from their vehicle and threw themselves to the ground. When the shooting stopped and they rose to their feet, Father Marusa found a large piece of jagged shrapnel embedded in his seat.

“I should have been dead about six times in the month of June alone,” he noted. “But, anyway, I survived. I guess carrying the Blessed Sacrament was my protection. I told the Lord, ‘If I go, you go!’”

Despite the constant danger, Father gave little thought to death. “It’s only when you get out of the army, in your sleep, that the close shaves register.”

Bringing Many Living Soldiers to Christ

Although Father Marusa devoted much time administering Anointing of the Sick to the seriously wounded and dying, he also brought many living soldiers to Christ. In just his first month in Rennes, he celebrated six First Communions. He taught soldiers catechism using materials he carried in his jeep.

He offered Mass every day, “unless the firing was too heavy.” He did this from the hood of his jeep, so the men would be able to see him better, and was able to complete a liturgy quickly — a necessity in the midst of combat.

Even his jeep was a constant reminder to follow God with the slogan “Homeward Bound” painted on it. The slogan had two meanings: the hope of the troops that they would return home safely and a declaration of the priest’s faith that if we die in God’s friendship we will join him forever in heaven.

In September 1944, Father Marusa was assigned as chaplain to the prisoners of war at a camp in Rennes — partly because he spoke fluent Slovak, which Russians could understand, and could make himself understood in German. For a year, he acted as priest to 50,000 Germans and 10,000 Russians.

“Oh, what a blessing,” he recalled. “It was wonderful work.”

For the courageous fulfillment of his duties, Father earned a commendation from his commanding officer.

After the war, Father continued his work as a chaplain, devoting himself to serving in hospitals in the Diocese of Orange, California, for 15 years. He performed parish work for many years at a Slovakian parish, and taught Latin and Greek at St. Michael’s College Preparatory High School of the Norbertine Fathers in Silverado, California for 24 years.

He also heard confessions at the Norbertine Fathers’ adjacent St. Michael’s Abbey, and at historic Mission San Juan Capistrano. Throughout his life he used a Latin sacramentary, translating into English the Epistle and Gospel for the congregation.

For 77 years, Father Marusa played the violin, which he also taught to others. He also was an accomplished organist. Father was especially proud that five descendants of his grandfather became priests in the U.S. He also had four nuns among his relatives.