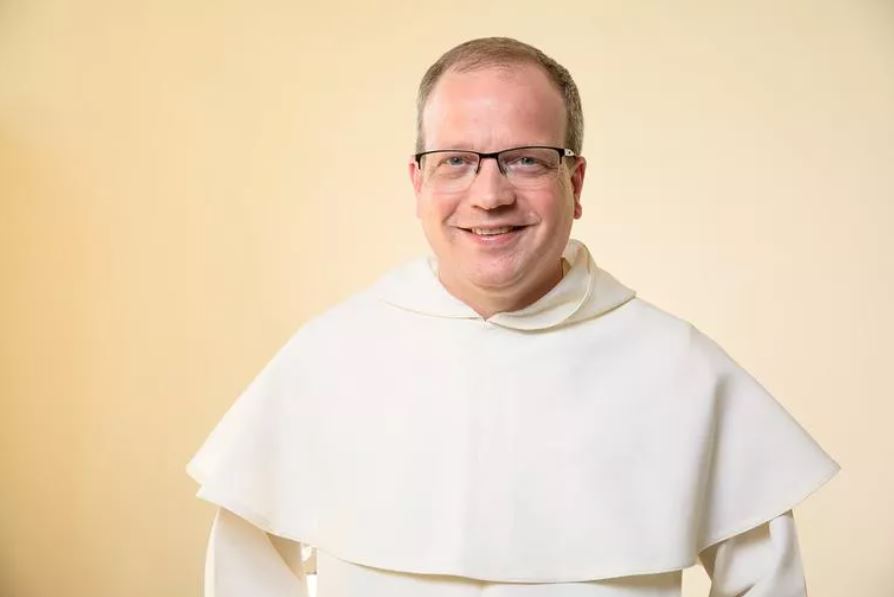 The Dominican priest talks about his recent appointment as rector of the Angelicum, vibrant spiritual life in Rome, and in engaging with others “in the light of Christ and the Catholic intellectual tradition.”

ROME — Dominican Father Thomas Joseph White says he is “humbled by the decision” to be appointed rector of the prestigious Pontifical University of St. Thomas Aquinas in Rome, and at the same time hopes to bring positive elements of the American ethos to the university.

In June 13 email comments to the Register, Father White recalls his past experiences including as director of the Thomistic Institute at the Rome university, how these experiences will help him in his new role, and how he intends to lead the institution commonly known as the Angelicum in this challenging time for the Church.

A convert son of a Jewish father and Presbyterian mother, Father White, a native of Atlanta, Georgia, also explains his journey to the faith, and answers the all-important question of whether he will be able to continue the popular bluegrass band he founded with brother Dominicans, the Hillbilly Thomists.

Appointed June 10 by Dominican Father Gerard Timoner, the Master of the Order of Preachers, Father White will begin work as rector of the Angelicum, whose famous alumni includes Pope St. John Paul II, on Sept. 14.

What experience and expertise do you hope to bring to the role, and are you the first American rector in the Angelicum’s history?

In fact, I believe Dominican Fr. Benedict Blank of the Western U.S. Province was appointed rector for a brief time in 1951.  First things first, Americans have reason to enter the European theatre of academic life with a great deal of humility. Europe with its prestigious spiritual and intellectual heritage provides a patrimony that still nourishes the universal Church, often in vibrant ways. The custom of sending seminarians from around the world to study in Rome presupposes also that there is a value to Roman education, including exposure to the Italian synthesis of art, culture, learning, and spiritual life. So, I’m humbled by the decision of the Master of the Order to nominate me to this position.

At the same time, there are positive contributions that come from the American ethos. The Catholic Church in the US is often quite hopeful, despite its trials, evangelical in the best sense of the world, efficient, and it has an important voice in public culture. Before I came to the Angelicum, I was director of the Washington, D.C. Thomistic Institute for ten years, which brings Catholic intellectual talks and conferences to secular university campuses. We started our programs at Harvard, Yale, and Brown and extended out from there to dozens of campuses. Those of us working on this project have been engaged for years in conversations with scholars and students about the intellectual challenges of secular culture, and have been able to think in this light about the future of theological research, and about intellectual evangelization in our own historical moment. This experience translates pretty fluidly into the European context, where the Church is confronted with the sociological fact of increased secularization, and the need for a new missionary initiative. It also provides a way of thinking about global influences and pressures placed today on nations in the global south, in countries that were once more religious but that now confront new alternatives coming from their secular neighbors to the north.

You’re a Dominican of the Eastern Province which has been flourishing in vocations in recent years — what are the reasons for such growth and how do you intend to bring this successful approach to the Angelicum?

The Dominican Providence of St. Joseph (New York- Washington, D.C.) seems to have found a living balance in recent years between a common life of prayer, commitment to liturgical beauty, faithful sacramental practice, substantial theological education, and outgoing, confident apostolate. Many of the young men entering the province over the past decades come from a professional background or from sophisticated university settings, but have laid this aside to preach the Gospel to their peers. As a result they often know well the cultural trends around them, but instead of adopting a defensive posture they have found ways to communicate Catholic truth with charity, pastoral zeal, and clarity. I’m really proud to be a part of this wonderful group of friars. That being said, they have no monopoly on this mentality in the Order of Preachers. At the Angelicum, I’m privileged to live and work with many people who are extraordinary and totally dedicated to Christ. I think the genius of the Order is found in St. Dominic’s integration of learning, friendship, common prayer, and common apostolic work. All the students at the Angelicum participate in this heritage in their own way, because our university is a community of common prayer and eucharistic adoration as well as one of intense study and friendly social life.
While some in the past have had concerns about the academic quality at the Angelicum, today it seems that there’s been a steady increase in quality. How do you plan to continue this momentum, both in terms of faculty and students?

Over the past 5-10 years the Order has assigned a wave of excellent scholars to the Angelicum, and we have evolved professionally as well. Today I think it is fair to say that the university provides a truly excellent education in many domains, including in dogmatics, moral theology, spirituality and philosophy. We’ve renovated our Thomistic Institute and have also created a series of new initiatives in regard to the contemporary dialogue between science and religion, Catholic ecumenism (especially with the Eastern Churches), and conversations with contemporary philosophies. While doing all this we keep the pastoral vision of theology in view, thinking about how it impacts the real life of pastors and local Churches. In the near future we are planning to recruit more faculty with expertise in canon law, inter-religious dialogue, Christian spirituality, and New Testament exegesis. We also need to expand our conversation with the larger academic world to prepare our students to engage fully with the challenges and questions of our non-Christian contemporaries, speaking to them with both faith and reason, in the light of Christ and the Catholic intellectual tradition.

Many view this as a time of confusion and disagreement in the Church. How can the Angelicum promote a culture of sound doctrine at this time?

The Angelicum is a pontifical university, so our teaching is always conducted cum Petro et sub Petro, in the service of the Holy See and the universal magisterium of the Catholic Church. In fact, the ground of unity in the Church stems from an intellectually informed, integral confession of the faith, and from the communion of love. Here a knowledge of tradition plays a role, but so does the search to know Christ personally and to love others who God places on our path. To seek the fullness of the truth in love is the vocation of the Catholic intellectual. To love in the truth is the vocation of the Christian. Pope Francis rightly challenges those concerned with doctrinal rectitude to couple their zeal for the truth with a love for persons, one that makes us both merciful and vulnerable of heart. The Dominican intellectual tradition seeks to preserve the acquired wisdom and doctrinal patrimony of the past, and in that sense it is “conservative” in the best sense of the term, but it is also a living tradition engaged with new questions and challenges, in biblical interpretation, dogmatics, philosophy, bioethics, and social doctrine. John Henry Newman spoke of the Church’s life as one characterized simultaneously by both conservation and chronic vigor. If we practice theology in that way and integrate it into a spiritual life seeking holiness and union with God, then we can continue to speak to our own age effectively and dynamically, while also speaking out of the apostolic teaching and the ancient wisdom of the Church.

As a convert to the faith with a Jewish father and Presbyterian mother, and possibly the first convert to be rector, can you tell us a little about your journey to the Catholic Church?

I read my way into the Church. When I was 20, I read Athanasius’ On the Incarnation and realized that there was a harmony in the ancient Church of philosophical argument, theological brilliance, and spiritual mysticism. That impression was only compounded when I eventually read authors like Augustine, Newman, Ratzinger, and Teresa of Avila. Eventually I went on retreat at a Benedictine monastery when I was 21, and experienced Eucharistic adoration. Once you realize that Jesus Christ is truly present in the Eucharist it becomes feasible and in a sense natural to embrace the totality of Catholic doctrine. Understanding and living it takes longer but I have been helped in that process by many great spiritual friends and teachers along the way. I remain close friends with my parents who are among the best “ecumenists” that I know. The love of Christ expands beyond the visible horizons of the Church.

As well as being a well-known Thomist, you’re also famous for being a founding member of the bluegrass Hillbilly Thomists band. How did that band begin and will you be able to continue it?

This is the real question. What will happen to the band? The Hillbilly Thomists are a bluegrass/Americana band composed uniquely of Dominican friars that took their name from a saying of the Southern Catholic literary author Flannery O’Connor. It was formed initially in 2005 by two of us, and grew progressively as several professional young musicians entered the Dominican House of Studies in Washington D.C.. Today the band has two well-known albums, including one recently released in January called Living for the Other Side which is available in many venues online. We are also recording a new album this coming August. Our music is not for liturgical purposes. It’s for ordinary life. Bluegrass music has a unique energy, and it helps one celebrate life. It’s joyful music for ordinary times, and Christians need that too.

The story of St. Anthony of Padua’...