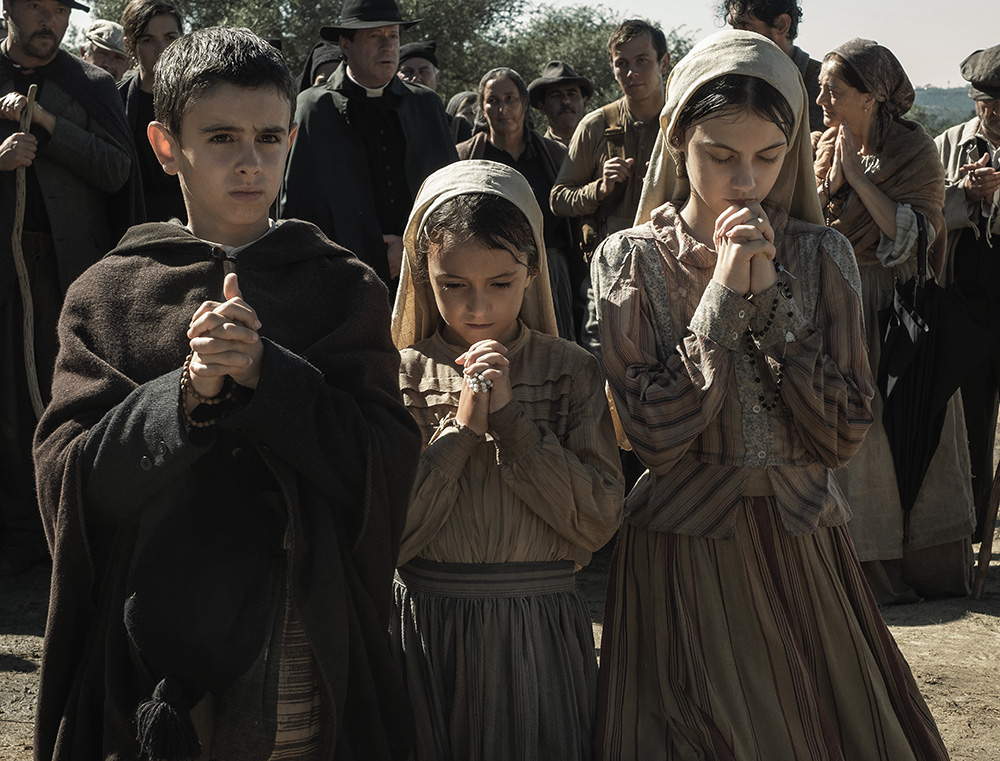 No pandemic is going to stop the movieFatimafrom opening in theaters and home screens on Aug. 28.

“We know that our world right now is not so much unlike the era of Mary’s appearance at Fatima a little over a hundred years ago. We’re rife with danger due to a pandemic, civil unrest, so many economic uncertainties that many families and individuals face. At yet the message of Our Lady comes at a pivotal time in history again, for all of us to experience in the film,” Alexis Walkenstein told a thousand listeners during a Zoomwebinar.

The pandemic has affected movies and movie theatres, and may have pushed back the release of this major film. ButFatimafinally opens in a little over 200 theatres around the country and Canada on Friday, Aug. 28, and at the same time will be available on a large variety of other Video on Demand (VOD) platforms for viewing in the safety and comfort of your own home.

Alexis, together with Lisa Wheeler who is founder and president of Carmel Communications, and Natasha Howes who is one of the producers ofFatimaand the award-winning Fatima storyThe 13th Day(2009),described many creative ways to see the filmand share it with others, from the home to the parish to all kinds of groups, even a drive-in movie night at your church.

You can see the movie with family, friends. Watch from several homes, then have a Zoom chat to discuss the film.

You can buy the codes for each of the members of your prayer group, for example. You can ask a local theatre to have a private showing for a parish group, a group of friends, or families without opening to the general public. The women went through loads of possibilities (see the websiteFatimaTheMovie.comfor specifics on sales, what theatres will be showing the film, and all the other details). They can even help make arrangements with a theatre.

Get your pastor, your bishop on board, Alexis said.

If a person or group can, they might buy 50 codes to hand out to others, maybe neighbors, especially the young since this is “a tremendous opportunity to impact a new generation with the message of Fatima.” It’s a way to bring the message to your “little corner of the world.”

“One of our key priorities with this film was to really reach an authentic portrayal of the depiction of thee children’s experiences,”explained Natasha. By having the children similar in age “we breathe a new vitality in the story of Fatima particularly for new generations and young audiences by actually truthfully depicting these experiences through the performances” of these youngsters about the same age.

“It’s a teachable moment — seeing it together, bringing people to the next level of faith,” Alexis said. “A cousin of mine, a 10-year-old was so touched, he’s now praying the Rosary on his own!”

“For parents trying to instruct your children in a Marian devotion this movie will go a long way” in helping that, she added. “This should be a movie that gives faith and dimension to what’s going on right here and right now in this pandemic era to teach us,” both adults and children.

Another reminder: the film’s website (FatimaTheMovie.com) even hasresourcesand activities aimed at the young set about the apparitions, message, word finds, coloring sheets, videos, etc. They’re ready to download. And for everyone there’s a video on how to pray the Rosary. Soon to be added is a prayerful meditation series created by the shrine of Fatima.

As Lisa and Alexisshared a series of waysto see the film they also dealt with questions about the codes to purchase and more. For example, Lisa explained that a “home” showing means the intent is the “household.” One code works for the household, whether a single person or family. That means bringing in relatives, friends and others who do not live in the household would constitute a group showing and the movie is not licensed at present for such a showing. Besides. It would not be “a just way to showFatima.”

Although the women didn’t say this, but common sense tells us that buying a ticket to a movie and then sneaking in 5, 7, 10 relatives and friends would be unjust at the very least.

Soon licensing for such groups, church groups, etc., for public exposition will be available. But if you want to buy enough codes for the people who will come, that’s possible at this time. Check the website and call the folks there for specifics.

Creatively, a group, say a prayer group, can watch it, each from their own homes with their own code, then after the movie they can have Zoom conferences to talk about it together, for example.

Alexis suggested, “Do something extra. Buy yourself a code, buy one for a next door neighbor, or someone who is hurting…”

There are still ways to get a group to watch the film together. For instance, get 100 codes for the drive-in parish movie night. Check thewebsitefor information on the ways. At the same time, talk your pastor, your bishop, to promote the film. Invite them to come to a showing and share about the message of Fatima.

“Think creatively,” Alexis said. “We know that this movie will have tremendous impact. We need a reinfusion of the Rosary in our world. We are seeing bishops around the country right now doubling down on devotion to Mary.”

Alexis quoted Archbishop Jose Gomez of Los Angeles who said, “The filmFatimais a great movie. It reminds us that the Mother of God has a tender love for each one of us, and that she continues to be at the heart of God’s plan for redemption.”

She pointed out that with many other bishops in the United States and Canada and also Mexico, “we’re seeing a rekindling and recognition of pointing to Our Lady as the source of our way out of all of our messes.”

So “let’s follow through with what Mary is calling us to,” Alexis concluded. “Now together withFatimathe movie…we have the opportunity to make Mary known.”