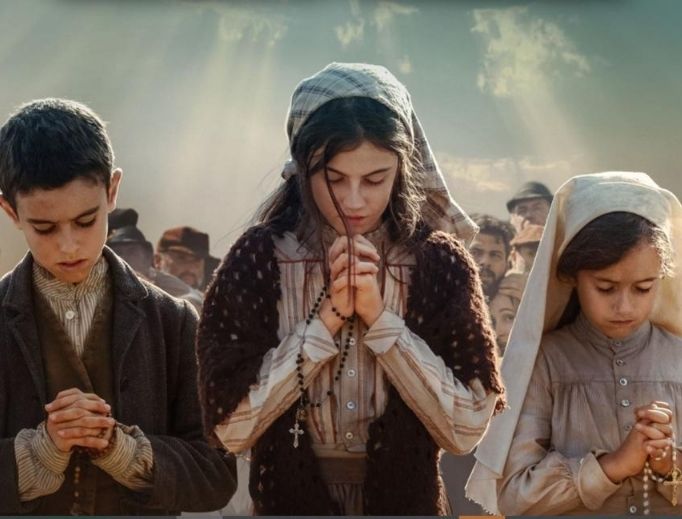 Cast members share their takeaways from filming the story of the Marian apparitions.

Shortly before the premiere ofFatima, several cast members sharedwith the Register some experiences and thoughts about the film, whichdebutedFriday in theaters and on demand.

“I really like that it’s releasing at this point of the year because of the coronavirus and everything. It just brings faith to people’s hearts, and it’s really inspiring. It brings hope to the world at this time,” said 14-year-old Stephanie Gil, who plays young Lucia. Gil was 12 during the movie’s filming.

“I think that the main message of the film is to have hope and faith in general, and in yourself; and to believe in what you believe and not let anyone tell you otherwise. It’s just: Be strong and fight for what you believe.”

Gil said younger audiences will also like the film because they will feel they can relate to the seers, Lucia, Jacinta and Francisco, because they were 10, 8 and 7 during the 1917 apparitions, and going through that situation at their young age “is amazing, something really admirable for me. I want them [young people] to take out [as a message] how you should never give up. … In the film, Lucia is so devoted to her faith, and that’s what keeps her going.”

Gil said this role was “life-changing. I will never forget filming this film because it’s so special and close to my heart.”

Actor Goran Višnji? shared how he portrayed Arturo de Oliveira Santos, the atheist, unbelieving mayor, whose wife was a believer and churchgoer. “In Portugal at the time, the Church was really on the outskirts of society; the new government was against it. They were trying to portray the Church as superstitious people. [Yet] the core of the people was supporting the Church, and people were churchgoers. I was trying to find a kind of balance between those two things. And I was trying to portray him as a guy between a rock and a hard place.”

Višnji? believesFatimawill appeal to everybody, Catholic or not. “If it is really an honestly good and positive message, we can all recognize it. … The thought is important; the message is important. So this movie doesn’t matter who’s going to be watching it — Catholics, Protestants, Buddhists or whatever — but the message of the film is beautiful. It’s love each other. Don’t make war. The message is pure, positive and beautiful.”

A Catholic himself, Višnji? went to Fatima while filming in Portugal. “You feel you’re in an amazing, special place. You feel a calm; I don’t want to say divinity. But it does feel very special, very different,” he said of his pilgrimage experience. “The whole process … was a bit special; it wasn’t like shooting any other film.”
Portraying Jacinta, 9-year-old Alejandra Howard makes quite an impression inFatima, her first film.

She enjoyed playing the young saint “because we were very close to where it actually happened, and I heard all about Jacinta. I was on the internet learning about her,” Howard related. “I think it was easy for me.” The best part about playing Jacinta, Howard said, was having something in common with St. Jacinta. “I am kind of courageous, and she was courageous.”

For her part, Howard said the filming deepened her own faith. “I was already a believer of God. But I think after doing this movie I was more of a believer now than before.”

She encourages young moviegoers to see the film because “it’s a really interesting story, a true story that happened a hundred years ago, and [you] get a really good feeling of it.”

Lucia Moniz, who is not Catholic, portrays Lucia’s mother, Maria dos Santos. She shared how she “was very moved by the script, very moved by the way it was filmed. This film talked about an important issue, which is real lives and how this event affects people who believe and people who don’t believe. The most important thing I felt with this film and the message is that, beyond believing or not, the power of love is so important.”

Moniz brings that out on screen in her love for her daughter, despite her refusal to believe Lucia sees the Blessed Virgin Mary. “I always wanted to make sure of that even though this character doesn’t act right in most of this story in her reaction in not believing her [daughter], it’s not a question of how much she loves her daughter. It’s sometimes humans don’t know what to do, and they don’t know how to act.”

Joaquim de Almeida, who plays Father Ferreira, explained why this is such an important film. “There was the time of the pandemic then; the Spanish Flu was going on — so many parallels to what’s happening today. In Portugal in 1917, people in the country were very poor, and they were in need of hope, and belief and faith, and this was something that even if it was repressed in the beginning by the republican government, it ended with many people being attracted on Oct. 13 — 70,000 people were there” to see the “Miracle of the Sun.”

De Almeida believes people “should look at it and be upbeat about faith and believing and hoping. It expresses a good lesson for the kids. If you believe in something, don’t say you lied. If you believe it’s true, say it’s true. The kids had so much pressure to say it was a lie. They said, ‘No. We saw it.’”

Whether viewers are “a believer or nonbeliever,” he thinks the film can touch all open hearts. “It’s appealing because it’s based on facts. A lot of believers come to Fatima every year, but it’s not just that. It’s the story in itself, and the comparison, the parallels to today. Most of all, it’s important that we have hope.”