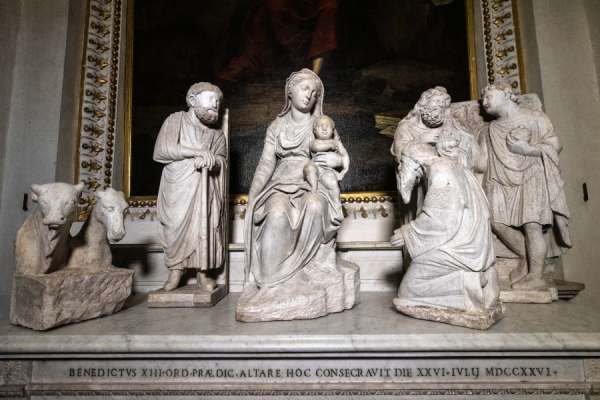 Rome Newsroom, Dec 23, 2020 / 11:00 am (CNA).- The first known nativity scene figurines are on display this Christmas in one of Rome’s oldest basilicas.

The underground Chapel of the Nativity in the Basilica of St. Mary Major — known to Italians as Santa Maria Maggiore — once contained at least six marble nativity statues sculpted by Arnolfo di Cambio in the late 13th century.

From Dec. 22, the public will be able to view these nativity figurines in the Marian basilica’s Sistine chapel, located to the right of the main altar.

The figurines were commissioned in 1292 by Pope Nicholas IV, the first Franciscan pope, who was inspired by St. Francis of Assisi, creator of the first living nativity in Greccio, Italy, in 1223.

Sante Guido, an art historian and professor at the Pontifical Gregorian University, told EWTN that five of the marble statues in the nativity scene today are completely original to the 13th century.

This means that this nativity scene was present when St. Cajetan experienced an apparition of the Child Jesus in the Chapel of the Nativity on Christmas night in 1517 and when St. Ignatius of Loyola chose to offer his first Mass in this chapel in 1538.

It is unclear how many figures in total made up the nativity scene commissioned by Nicholas IV, but the marble figures that exist today of St. Joseph, the three Magi, and a single work depicting both a cow and a donkey are part of the original set, according to Guido.

The statue of the Virgin Mary enthroned with the baby Jesus underwent significant restoration in the late 16th century, he explained.

The Italian art historian and restorer noted that this is not the first depiction of Christ’s birth in Christian history, but the first nativity scene in the form as it is known today.

The Basilica of St. Mary Major’s connection to Christ’s birth goes back for centuries before this nativity scene was commissioned. The basilica has a precious relic of pieces of Christ’s crib sent from Bethlehem by St. Sophronius, then the patriarch of Jerusalem, to Pope Theodore I in the seventh century.

For this reason, the basilica was once called St. Mary of the Manger and was also referred to as “the Bethlehem of the West.”

This relic of the manger was historically kept in the crypt Chapel of the Nativity, which was first created in the seventh century but has been repeatedly reconstructed over the centuries.

Pope Sixtus V restored the crypt Chapel of the Nativity to the form seen today between 1585 and 1590 as he built the basilica’s Sistine chapel.

In St. Mary Major’s Sistine chapel, where the nativity scene is located, one can also see the first tabernacle to be made according to the precepts of the Council of Trent and an altar dedicated to St. Jerome.

Tradition holds that St. Jerome’s relics were brought from Bethlehem to Rome shortly after the relic of the manger and are now located either in the main altar or this side chapel in the Basilica of St. Mary Major where the first nativity is currently displayed.

During the Advent and Christmas season this year, a relic of the manger has been brought out for veneration in the basilica’s Borghese chapel, to the left of the main altar. This relic is usually found in the niche below the main altar. It was moved by Pope Pius IX from the Chapel of the Nativity to its current location under the altar in the 19th century.

Pope Francis visited the Basilica of St. Mary Major during Advent this year on the Solemnity of the Immaculate Conception, and offered Mass in the crypt Chapel of the Nativity.

Last year Pope Francis made a pilgrimage to the Italian town of Greccio during Advent to sign an apostolic letter on the meaning and importance of nativity scenes in the location where St. Francis of Assisi created the first nativity scene in 1223.

The letter recalled the story behind St. Francis’ first living nativity scene, or crèche. The saint asked a friend 15 days before Christmas to help him prepare “to bring to life” the memory of Christ’s birth in Bethlehem.

“When St. Francis arrived, he found a manger full of hay, an ox and a donkey. All those present experienced a new and indescribable joy in the presence of the Christmas scene. The priest then solemnly celebrated the Eucharist over the manger, showing the bond between the Incarnation of the Son of God and the Eucharist.”

“At Greccio there were no statues; the nativity scene was enacted and experienced by all who were present.”

Thomas of Celano, the first biographer of St. Francis, wrote that someone present at the Mass had a vision of the baby Jesus himself lying in the manger.

Pope Francis wrote: “In a particular way, from the time of its Franciscan origins, the nativity scene has invited us to ‘feel’ and ‘touch’ the poverty that God’s Son took upon himself in the Incarnation. Implicitly, it summons us to follow him along the path of humility, poverty and self-denial that leads from the manger of Bethlehem to the cross.”

Advent, the Annunciation and the M...