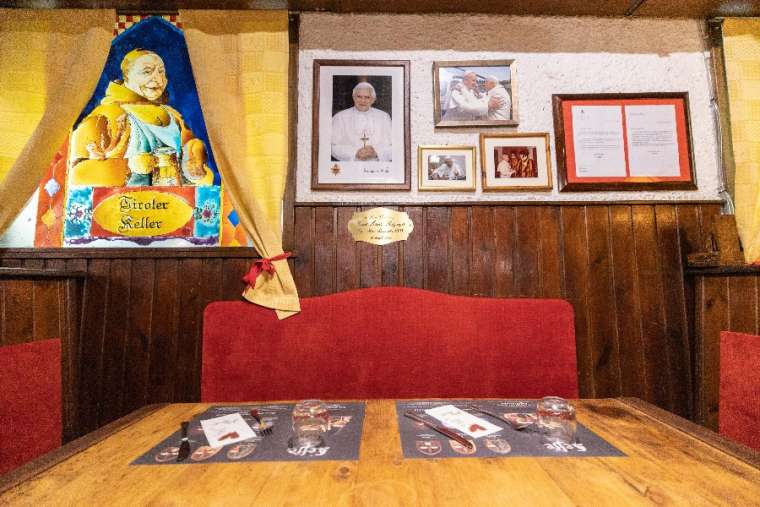 “I never thought he would be made pope,” said Mario Notari, speaking about Pope Emeritus Benedict XVI.

To Notari, the quiet and gentle Cardinal Joseph Ratzinger was just another patron at the little Austrian restaurant he manages a few steps from the Vatican.

“There was this regularity of this cardinal, who always arrived with a look of humility, very reserved, and went downstairs with his little bag,” he told CNA.

Notari is the long-time manager of Cantina Tirolese, a restaurant of two floors, which since 1971 has served traditional German and Austrian dishes to its mostly Roman clients — and to a few cardinals.

Benedict XVI, when he was serving as prefect of the Congregation for the Doctrine of the Faith, would come to the restaurant a few times a month with Vatican colleagues, owner Riccardo Macher (pictured below) said.

Notari remembers that Ratzinger liked to order a dish called frittatensuppe, which is a traditional German plate of beef broth with strips of a thinly cooked mixture of egg, flour, and milk similar to a French crêpe.

“And he drank aranciata,” he said with a smile, referring to a popular Italian orange soda usually known by the brand name Fanta.

Ratzinger “did not eat much when he was here,” Macher noted, “but he came often anyway — to find the flavors of home. With my mom he would speak German.”

At age 28, Macher is the third-generation owner of Cantina Tirolese. He took over after the death of his mother, Manuela, three years ago.

The restaurant was first opened by Macher’s grandparents, an Italian and Austrian.

His grandmother would greet and welcome guests to the restaurant as if they were in her own home.

“Grandma was this tall, blonde, Austrian woman with blue eyes, who, as we say, made the honors of the house,” Macher said.

At the time it was opened, on September 23, 1971, the neighborhood of Prati had “practically nothing,” Macher explained, and “it was one of the first places to have German beer on tap.”

Macher’s grandma, at 80 years old, is still living, but has returned to Austria, the young owner said. His grandpa has died.

He noted that he is a bit young to have many memories from when the German cardinal would come to dine there, but “there was Mario and there was mom in those times,” he said.

When a neighbor and client of the restaurant lost her dog, Cantina Tirolese hung up a sign with information about the dog and how to contact the owner if he was found.

“That evening, when the cardinal was going down the stairs, he gave a glance at what was written on the paper, and smiling… he said, ‘but I am not lost,’” the manager recounted, pointing out that the lost dog was a German shepherd, a common nickname for the theologian.

“This was something kind of charming,” Notari said.

Then, one day in 2005, when Notari and Manuela were returning by car from Austria with products for the restaurant, they heard the news of Ratzinger’s election as pope.

“And we thought ‘but, it is not possible,’” Notari said. The next morning, when he arrived at the restaurant, there was a crowd outside, and he was worried that something bad had happened.

“In reality, it was journalists with video cameras who were looking to have some information,” he recalled.

After his election, Pope Benedict XVI did not return to eat at the Austrian restaurant; “Mom would always say that we lost a client,” Macher joked.

There are not really any photos of Cardinal Ratzinger at Cantina Tirolese, since its staff wanted to respect his privacy.

But the restaurant still shows signs of its former client’s presence. One of the tables he used to sit at has been dedicated to him and there are news clippings about him hanging on the walls.

Two years ago, the restaurant sent a present for the pope emeritus’ 91st birthday: a homemade strudel inside a wooden box. Macher said that they heard from his secretary that Benedict was grateful.

Cantina Tirolese has continued to host other well-known guests over the years, including Italian Cardinal Angelo Bagnasco and Argentine Cardinal Jorge Bergoglio, the future Pope Francis.

“We have always had a good relationship with the Vatican, being so nearby,” Macher acknowledged.