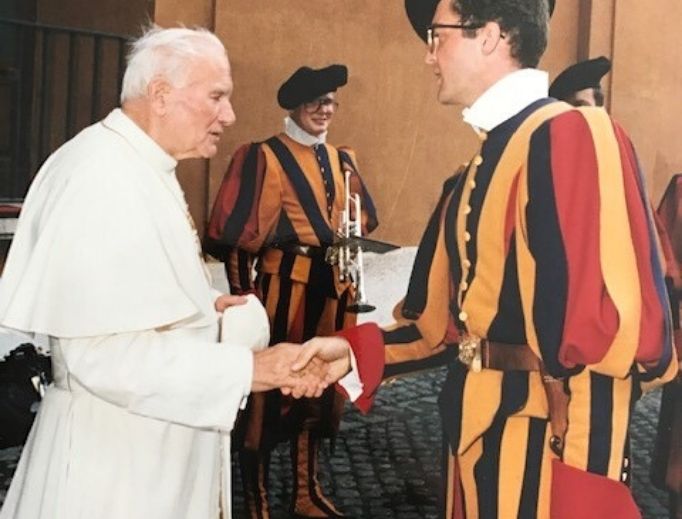 May 18 marks the 100thanniversary of St. John Paul II’s birth. For the occasion, former Swiss Guard Mario Enzler finally put down in book form what he has spent years sharing at retreats and conferences: the life-changing lessons he learned from 1989 to 1993 when he served the much-beloved Servant of the Servants of God.

Born in 1920 in Wadowice, Poland, Karol Jozef Wojtyla took the name John Paul II when he was elected pope in 1978. In his 27 years as pontiff, he helped bring down communism in Europe, improved the Church’s interfaith relations, implemented the reforms of the Second Vatican Council and established World Youth Days. Among the most traveled of all world leaders, he also beatified and canonized more people than any other pope. When he died in 2005, he had lived through an assassination attempt and had courageously endured years of suffering from Parkinson’s disease. He was canonized for his heroic virtue in 2014.

After serving the pontiff, Enzler worked in banking and as a financial adviser at the Vatican. Today, he is a professor at The Catholic University of America, where he teaches ecclesial management and administration to clergy. Married and the father of five children, Enzler lives in New Hampshire.

Published by Newman House Press in April, Enzler’s book,I Served a Saint: Reflections of a Swiss Guard in Honor of the Centenary of the Birth of St. John Paul II, is a quick read (127 pages) that offers insights into the Pope’s sainthood and other holy men and women Enzler came to know through his service at the Vatican.

“By helping us get to know a contemporary saint better … Enzler has made a contribution to St. John Paul II’s New Evangelization,” papal biographer George Weigel notes in the book’s foreword. The memoir not only highlights the universal call to holiness, but also offers tools to achieve it. The book has received praise from a host of Church leaders, including Cardinal Kurt Koch, prefect for the Congregation for Christian Unity, who wrote: “This book … can be of great assistance on [one’s] path to holiness.”

Enzler recently spoke this week to theRegisterabout the book and his time with St. John Paul II. The interview has been edited for clarity and conciseness.

Why did you write the book?

Because [many] young adults … don’t know who St. John Paul II is. People can catch a glimpse of him through the book. My hope is that it will create a desire in them to pursue more knowledge by picking up his encyclicals or homilies or talks. It’s a small, simple book to honor the man who shaped my life and made me a better man, a better husband, a better father.

How long did you serve as a Swiss Guard?

The minimum service is two years. After that, you can choose one year at a time. Some 90%-92% of the guard leave after two years, because it is a huge sacrifice to live in the Vatican working crazy hours — basically 100 hours a week.

I ended up doing three and half years. For me, it was a mission: I wanted to better understand what the Church was and who John Paul II was. I wanted to deepen my faith. Being born in St. John XXIII’s diocese, I was a cradle Catholic, a daily Mass attendee before school started, and an altar boy until I was too big for the cassock, but I never went deep in my faith.

A little secret: In my formation as a student, one of my educators was Don Luigi Giussani, priest-founder of the movement Communion and Liberation. He wanted me to understand a transcendent way of relating to God and to others. Unfortunately, I was not grasping the core point of the conversation. When I arrived at the Vatican, however, I did dive into some of those topics.

He was a very simple man. Every single time I was in his presence I was always aware that he was different. I was aware he had something I wanted, but I didn’t really know what it was exactly. So I paid attention to how he gestured, his words, how he related to people. He was a genuinely simple man, but entirely focused on the Eucharist.

He showed me on a daily basis that sacrificing is necessary for us human beings because it is redemptive. He told me, in a private conversation, that we have to remember there is a deeper reward when we make sacrifices for a higher purpose or in service of others.

Do you recall the first time you met him?

The first time I interacted with him one-on-one, alone, I was in the Apostolic Palace.

When he walked by, he stopped in front of me and said, “You must be a new one.” When he said that, I shook his hand and introduced myself. At the end, he grabbed my hand, with his left hand also, so he sandwiched my hand. He looked at me and said, “Well, Mario, thank you for choosing to serve he who serves.” Then he let go of my hand and walked away.

What effect did that meeting have on you?

That day I realized he was a unique man. He had something I wanted. [Eventually,] he made me aware of the fact that we have to ask the Lord every day for the grace to be courageous baptized men and women. That’s what St. John Paul II did. Every morning he would celebrate Mass, do the Liturgy of the Hours, spend time in the chapel. I know he was asking for the grace to be courageous, beyond the physical strength to carry out the schedule of the day.

Once he told me why [the Scriptural phrase] “Do not be afraid” was so important for him. He said, “Do you know, Mario, why we don’t need to be afraid?” I said, No, your Holiness, I don’t.” He said: Because God is always one day ahead of us.”

Can you share both a somber and a joyful moment you had with the Pope?

One that was really stressful was Gen. Norman Schwarzkopf’s Desert Storm attack. As guards, we were on alert. I broke the news to His Holiness about it when he and his priest secretary arrived to the Apostolic Palace from an audience. I had to open the gate for them to access the private elevator. His secretary asked me, “Mario, any news?” I told him Gen. Schwarzkopf had ordered an attack. He turned and told Pope John Paul II. The Pope looked at me, then lowered his head to his chest and closed his eyes. I realized he was hurt and deeply moved. I will never forget that moment.

There were a lot of happy moments because St. John Paul II was a happy person. He could be funny. One day, at the end of an audience, he had to walk in front of me to his car with a lay butler, [my friend] Angelo. Just before His Holiness was in front of me, Angelo elbowed me just above my stomach, which caused me to bend over. Because of my pointy helmet, His Holiness had to take two steps away. While I was fixing my helmet, His Holiness looked at me and said, “Mario, there is no need to bow for me!”

Was there an experience with the Pope that changed you?

One Sunday, it was supposed to be my day off, finally, after 10 consecutive days. But then I was told not to leave the barracks because His Holiness was receiving a small group of Polish pilgrims. When I arrived to the room before the group arrived, I noticed there were no chairs. Then, to my huge surprise, a group of 50-70 priests and seminarians came in and sat on the floor. His Holiness arrived. Everything was in Polish. I don’t speak Polish.

They would sing songs and laugh. I had no idea what was going on, so I’m looking at the frescoes, counting dots on the floor. Then His Holiness started speaking in the wrong language, so I turned my head. In the 20 or 25 seconds that he spoke in Italian, I know God wanted me there. It’s a “kiss” God gave me to be there that day. In Italiano, in those 20 seconds, he told the priests and seminarians that to be a priest means to be a man for others. To be a man for others doesn’t mean we have to do more, but to be more. Because of those two words “be more,” I rediscovered the beauty and power of my own charism, remembering that no gift given is meant for ourselves but is meant for the good of the Church and her mission.

How have you integrated that message?

After I left the Swiss Guard, I embarked on a financial career, and I also became a financial consultant for the Apostolic See. I got to meet the Pope as a financial adviser [for eight years]. I saw that his answer to the increased stress and cynicism of society was a renewed faith in human capacity. We have to keep hope alive by demonstrating courage. That’s what St. John Paul II showed me.

Is there anything the Pope modeled that you have adopted for your life?

He made me rediscover the power of prayer — especially the power of the Rosary. He said the Rosary was his favorite prayer, marvelous in its simplicity and profundity. He wanted me to have his beads so it would be my most powerful weapon.

We have to emulate the saints. St. John Paul II had a true devotion to Mary. I hope people, especially men, will rediscover the power of prayer, the power of the Rosary, so that in moments of difficulty they can call on Mary and she can show them the way.

He helped me rediscover that I can get to a higher level [of communion with God] if I can be in silence. For me, when God talks, he tends to whisper, so if I’m not in silence, I can’t hear his voice.

I also rediscovered the meaning of the word “humility.” I am very aware of the fact that whether a CEO, an archbishop or a university president, if you are not humble, you are worth nothing.

What would you most like people to know about St. John Paul II?

We should be inspired by the fact that he wanted to keep hope alive. We should be open to receiving the desire for self-giving as something absolutely essential for an authentic Christian life. John Paul II didn’t want to become a pope. He was asked, and he chose to follow the Lord. These two are essential for an authentic Christian life: hope and self-giving.