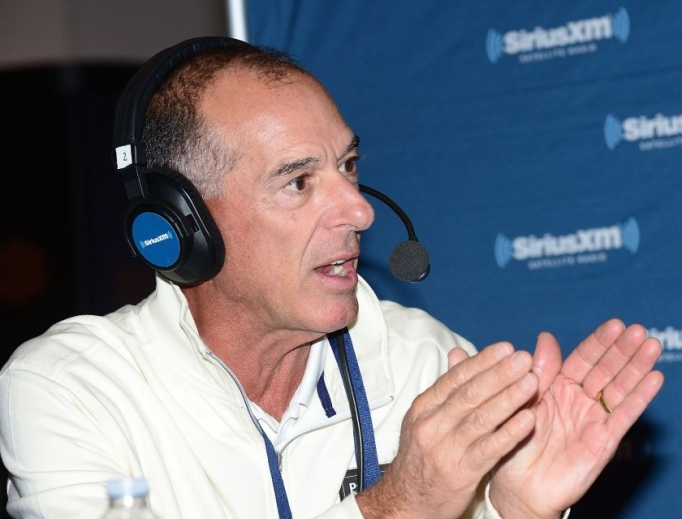 Chip Beck has holy hopes of liberty and justice for all.

Chip Beckhas done almost everything a golfer can do. The North Carolina native was a three-time All-American at the University of Georgia and a top-10 player on the PGA Tour. He was runner-up twice at the U.S. Open (1986 and 1989) and once at the Masters (1993), and he is one of only six PGA Tour players ever to shoot a round of 59 (at the 1991 Las Vegas Invitational).

Now retired from professional play, Beck, who has two brothers and seven sisters, enjoys seeing his family grow. He has six children and celebrates the births of more grandchildren each year. Younger generations are also the beneficiaries of his generosity outside his own family, as he has donated to various Catholic charities and has established a college scholarship through the PGA Tour.

Beck, now 63, wants to see civic and spiritual renewal for the sake of his own family and the whole country. With a vision that respects the omnipotence of God and the dignity of man, he believes the United States, which recently celebrated its 244th birthday, is on par to see great things ahead. He spoke of this belief, his pro career and various aspects of his Catholic faith in this interview on the heels of Collin Morikawa’s first major win at the PGA Championship on Aug. 9.

Of all the sports to play, what drew you to golf?

Boys tend to get into trouble if they don’t have focus, and I got into my share of trouble. However, the day my mother introduced me to golf, my life took a turn for the better. I still remember the first time I hit a golf ball. I could not believe how far that thing went off an eight-iron. That captivated me, since in most sports the ball stays much closer to you.

In 1967 Jack Nicklaus and Raymond Floyd came to Cypress Lakes Golf Course in North Carolina for an exhibition. Floyd was part owner of the course, and as a 10-year-old, I just thought it was the most amazing thing to see these men play golf so well.

I loved how the game of golf differed from other games in that, really, you only compete against the course or against yourself. There’s no defense, and no one hits or throws a ball to you; you can, if you’re ready, just walk up to the tee and play a course just as well as the best player in the world.

I played on the University of Georgia’s team, turned pro, won four tournaments on the PGA Tour and had some near-the-top finishes at the U.S. Open and the Masters. Then there were some rough times, but even in those, I still enjoyed playing the game.

There was golf great Bobby Jones, who converted to Catholicism before he died in 1971; but for more current times, former college golferPeter Hannah, now Father Peter Hannah, seems like the only Catholic golf story around.

The way we know there are four Gospel accounts instead of three or five or 50 is by the guidance of the Holy Spirit through bishops of the early Church. To really get at the meaning of any given passage, we need to listen to the organization that put it together in the first place.

The Church is called the “pillar and bulwark of truth” in 1 Timothy 3:15, so maybe sharing the Joel Peters bookletScripture Alone?,which highlights that concept, would make for more Catholic golfers.

That might work. It’sbeen said that Catholics are not as good as Protestants at sharing their faith, so if we stepped up our game, maybe the results would follow. Despite all the effort, though, each person makes up his own mind as to whether he’ll enter or reenter the Church.

To be honest, it really has been tough for the Church the past few years. I understand why some people are confused by a big new challenge seemingly every year. That’s where you have to be precise about what to expect from the authority of the Church.

While the official teachings of the Church are clear and unchangeable, Church leaders do not always pass them on well in word or deed. The pope is the leader of the Church, but he’s not infallible all the time and is not guaranteed to make the best prudential judgments. He, like any of us, needs to be guided, encouraged and held accountable.

I really think Archbishop [Carlo Maria] Viganò has had the best interests of the whole Church in mind with his blunt, yet clear, statements. I know people aren’t used to that type of direct speech, but in the Bible we read that the truth, not sugar-coating, will set us free. I think Viganò sees his words as truth that will ultimately bring us to a good place.

Families being open to new life, the further protection of children once they are born, the permanence of the marriage bond, and other traditional Catholic teachings still distinguish the Church today, even if some people want to change them. We’re the ones who need changing, not the teachings.

Are there any good Catholic books, radio programs or TV shows that you enjoy?

I’ve been a supporter of Bishop Robert Barron’s Word on Fire ministry. He explains things so well through his sermons, podcasts, writings and DVDs. He’s very traditional yet forward-thinking at the same time. He’s got the talent of communication and the desire to use that talent, so we have all been blessed by that. He’s really a saint.

I knew Bishop Barron in the greater Chicago area when he was Father Barron.Pat McCaskey[owner of the Chicago Bears] is someone in that area who appreciated Father Barron, as well. I didn’t go to Mass every day, but every time I went during the week, Pat was there. He and his family — including his brother Michael, who died just a couple months ago — have done a great job retaining a fan base for a team that has not seen much success on the field in recent decades.

Do you know of either theInstitute on Religious LifeorDaprato Rigali Studios, both in the Chicago area?

I’ve heard of the institute, but not the studio. It’s a great thing to help people called to the religious life to find the right community, and it’s also great to make churches look better.

Most golf courses, because of their natural beauty and silence, are easy to pray on. It should be at least as easy to pray in a church as it is on a golf course, right? Well, when art in churches is directed to that end, we can pray better.

You now live in the Naples, Florida, area, near Ave Maria University. Do you happen to know former MLS All-StarEddie Gaven, who is now the soccer coach there?

I do know some people from Ave Maria who were associated with Legatus, but I don’t know Eddie. Ave Maria is basically building from the ground up — physically, academically and spiritually. Older Catholic colleges have lost their way, so hopefully this one will become a big, shining example of what Catholic colleges should look like.

Do you think golf, because it is played outdoors by physically distanced players, is ideal for getting the sports world to open back up from the COVID-19 shutdowns?

I know from years of personal experience that being outdoors helps to boost your energy and outlook on life. It is very refreshing to be out in nature; that exposure to God’s creation can make our physical and mental health better. Where I live now, it has been 90 degrees, which is great for fighting COVID-19.

Being out and about, as long as it’s done responsibly, can only help. In fact, staying locked up probably makes it more likely that diseases will spread. They always talk about “flu season,” and that’s never in June, July or August, is it?

Do you have favorite concepts or aspirations to meditate upon while golfing?

In Proverbs 29, King Solomon says that without a vision — or revelation, or prophecy — the people perish. In order to live good lives, we need guiding principles with a foundation in God. That starts with the Ten Commandments and continues with the New Testament completion of revelation.

Life can be very tough; it can be very lonely down here. However, if we learn about God’s love for us and maintain a relationship with him, we can find purpose and peace of mind and help others to do that, too. That’s the beauty of the Bible, the sacraments, prayer and good works.

I think the major reason my niece recently recovered from cancer is all the prayers of so many people who knew about her condition and cared enough for her to do something. Masses, Rosaries, Divine Mercy Chaplets, reciting Psalms and private intercessions all have power before God, who sends us blessings and even works miracles. Troubles are not the time to reject God; they’re the perfect time to redouble our commitment to God.

The 244th birthday of the U.S. occurred last month. Do you have an overall assessment of how we’re doing?

We offer more freedom and opportunity to more people than any other nation in the world. We do have challenges, but they are often overemphasized and even encouraged to get worse by unfair media reporting.

Being born in Fayetteville, North Carolina, in the 1950s, I remember the Jim Crow laws that segregated Blacks. Those laws were put into effect by Democrats in the South who did not like the Republican-led victory in the Civil War. The economic and cultural gains made by former slaves in the post-war Reconstruction period did not sit well with Southern leaders, so they tried to erase the gains through new, freedom-restricting laws. Those lasted from the late 1800s all the way to 1965.

Anyone who lived before the mid-’60s knows there is so much less prejudice these days. There is so much more unity and love among people, but you wouldn’t know it if you watch the news.

Uplifting stories should be given more attention.

There are negative stories that need to be addressed — such as when human life is threatened before or after birth, when freedom of speech is curtailed, when property rights are violated, and things like that. However, there should also be a lot more effort to show people the good side of life, too.

The belief in opportunity and unity is embodied very well by President Trump, but he does not get fair media coverage. Before the recent shutdowns, for example, the unemployment numbers for minorities were at record lows. Things were going very well, and, now that we’re opening up again, I think we’re going to get back to where we were pre-shutdowns.

I’ve said that in golf, your mindset determines your progress. It’s a matter of looking beyond yourself and your worries to what the ideal shot is. There’s a standard to be met, and the clearer that standard is, the more likely you are to achieve it. It’s the same for life in general: You need a clear, noble vision and then the courage to follow through. Trump has that vision and courage, and the country is now starting to live it out again.