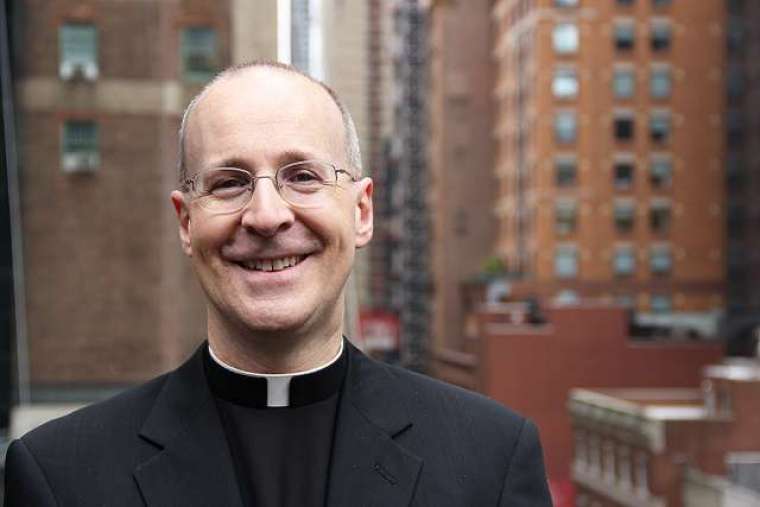 Fr. James Martin, S.J., and Sister Simone Campbell, SSS will both offer prayers during the Democratic National Convention, it was announced on Sunday. Martin, along with a rabbi and an imam, will offer virtually a benediction on Aug. 20, the last night of the convention. Campbell will offer an invocation earlier on Thursday.

Martin, an editor-at-large for America Magazine, told the National Catholic Reporter that he was “honored” to be asked to pray at the DNC.

“Normally I shy away from anything overtly political, but it’s hard to turn down a request to pray,” Martin told the Reporter. He added that he had requested approval from his order’s superiors before accepting the invitation.

Martin said that his prayer will “respect the dignity of all life,” including “the unborn, the young Black person, the LGBTQ teen, the migrant.” He said that he hopes that his prayer “will help people find a way to build a more welcoming nation.”

In a tweet, Martin said that he would offer “the same prayer” at the upcoming Republican convention if asked to do so.

Catholic priests have often featured at conventions and other political events. In 2012, Cardinal Timothy Dolan of New York prayed at both the Republican and Democrat National Conventions, and in 2017, he led a prayer at President Donald Trump’s inauguration.

Campbell, the executive director of the NETWORK Lobby for Catholic Social Justice, had previously spoken at the 2012 and 2016 Democratic National Conventions.

During a 2016 interview withDemocracy Now, Campbell discussed her participation in the Democratic convention and her views on, among other issues, legalized abortion.

Asked specifically about a speech at the 2016 convention by NARAL Pro-Choice America president Ilyse Hogue, in which she narrated her own experience of abortion to cheers from the crowd, Campbell called the moment “touching and compelling.”

“From my perspective, I don’t think it’s a good policy to outlaw abortion,” Campbell told Democracy Now, saying instead that pro-life campaigners should “focus on economic development for women and economic opportunity. That’s what really makes the change.”

The Catechism of the Catholic Church teaches that “the right to life of every innocent human individual is a constitutive element of a civil society and its legislation.”

Campbell is also a leading figure within the Leadership Conference of Women Religious, an organization of some American religious orders, which was investigated from 2009-2012 by the Vatican over some questions of doctrinal orthodoxy andother issues, including the group’s political advocacy. At the conclusion of that investigation, the Congregation for the Doctrine of the Faith called for “major reforms”to the LCWR, including the need to resolve doctrinal issues in areas including abortion, euthanasia, women’s ordination and homosexuality.

During a 2011 meeting with then-Pope Benedict XVI, then-Vice President Joe Biden told the pontiff that he was being “entirely too hard on the American nuns” and that he needed to “lighten up.” Biden is the presumptive nominee for 2020.

Martin, who is well-known for his book “Building a Bridge” and advocacy on issues related to homosexualiy, has also spoken frequently regarding his support for the Church’s teaching on abortion.

Were Martin’s prayer to include explicit mention of “the unborn,” as he suggested it might, it would contrast the Democratic Party’s platform, set to be adopted this week at the convention. The draft platform, which was released in July, notes “Democrats believe that every woman should be able to access high-quality reproductive health care services, including safe and legal abortion,” and promises to “restore federal funding for Planned Parenthood.”

“Democrats oppose and will fight to overturn federal and state laws that create barriers to women’s reproductive health and rights,” the draft platform says, and includes a call to repeal a prohibition on federal funding for abortion.

For the first time, the 2020 draft platform calls for the Supreme Court decision Roe v. Wade to be codified in federal law, reflecting an earlier pledge by Biden to make this a key policy of his presidency.

During the Democratic primary campaign, candidates were frequently asked if the party should admit pro-life members and candidates for office. Several candidates, including featured speakers at the convention this week, insisted that support for abortion should be regarded as a necessary value for any Democratic Party candidate.

Writing forAmerica Magazinelast year, Martin said that “Many women whom I love, respect and admire support abortion rights and see these rights as a constitutive part of their authority over their own bodies.”

“But,” Martin wrote in a post explaining his opposition to abortion, “acknowledging that women’s bodies are their own does not diminish my own reverence for the living body in a woman’s womb.”