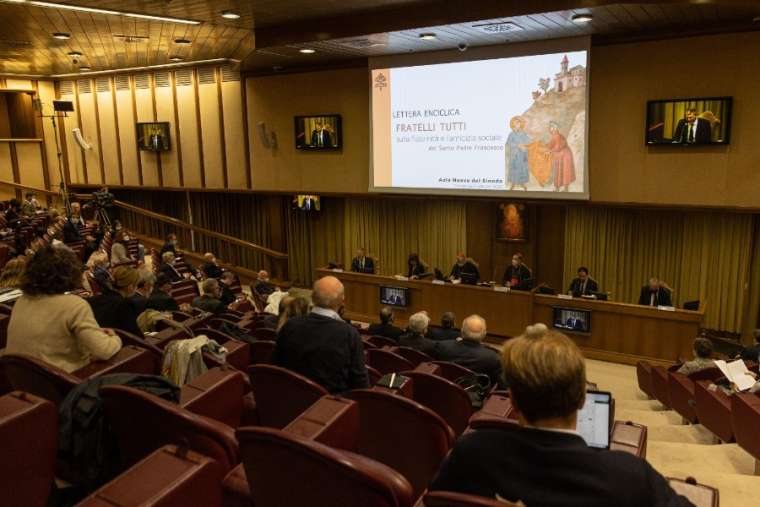 A Vatican presentation Sunday for Pope Francis’ third encyclical, “Fratelli tutti,” highlighted the involvement of the Higher Committee of Human Fraternity and its plans to promote the document.

“Fratelli tutti” was presented to journalists and other guests at the Vatican Oct. 4, shortly before its release.

The Higher Committee of Human Fraternityoriginatedin Abu Dhabi, the capital of the United Arab Emirates. It began collaborating with the Vatican following Pope Francis’ signing of thejoint declarationon human fraternity with Sheikh Ahmed el-Tayeb, Grand Imam of Al-Azhar, in February 2019. The group takes its focus from the declaration.

Those who spoke at the presentationincluded CardinalPietro Parolin,Vatican Secretary of State, and Cardinal Miguel Ángel Ayuso Guixot, president of the Pontifical Council for Interreligious Dialogue.

The other speakers were Andrea Riccardi, founder of the Community of Sant’Egidio; Anna Rowlands, a teacher of Catholic Social Thought at Practice at the University of Durham, United Kingdom; and Mohamed Mahmoud Abdel Salam, secretary general of the Higher Committee of Human Fraternity.

“Fratelli tutti,” is a great source of inspiration, Salam said Oct. 4, adding that he and his colleagues of the Higher Committee “promise that we shall continue to work faithfully to make [‘Fratelli tutti’] a reality for all. We shall do so through the concrete and ambitious initiatives of the committee.”

Among the initiatives being organized, Salam announced a forum of 100 young people from around the world, who will participate in study days at the Vatican, in Abu Dhabi, and in Egypt, at the university associated with el-Tayeb.

Salam, who is Muslim, and a former adviser to the grand imam, said he was “with much love and enthusiasm — in agreement with the pope, and I share every word he has written in the encyclical.”

Salam notedthat the Higher Committee was also working with the United Nations and Sant’Egidio, and on Oct. 21 wouldannounce “a big project with the pope … aimed at promoting our principles.”

Other participants in the presentation emphasized the universal quality of “Fratelli tutti.”

Ayuso called the encyclical “a precious gift that the Holy Father has given not only to us Catholics but to the whole of humanity.”

“‘Fratelli tutti’ gets us all involved,” Cardinal Michael Czerny, head of the Vatican’s Migrants and Refugees section, told CNA after the presentation Oct. 4.

Asked about the encyclical’s vision for a global world, and how people couldpreserve their individual identity and faith, Czerny said “that’s exactly the questions the encyclical would like each person, each parish, each family, each community, each school, each business to ask.”

“There isn’t one answer, that’s the point,” he continued. “The title is the program. So, what does it mean, what’s the distance between where and how I am right now and ‘Fratelli tutti’? That’s the program.”

Ayuso spoke about the need for a “flexible identity” that couldconfront “what changes in society, politics, and on the world level to go beyond biases and intolerances.”

Rowlands noted that the encyclical was not just a document written in a room of the Vatican to then “try to apply in the world.”

Those approaching“Fratelli tutti” should start with “reflection” and “deep meditation,” she said.

Rowlands also pointed out that Pope Francis warns people against closed forms of populism in the encyclical.

“The message Pope Francis wishes us to hear for this moment is that we are made fully human by what draws us beyond ourselves,” she said. “What makes this possible is a divine love, open to all, that births, bonds, bridges and endlessly renews.”

“This love cannot be erased or disposed of, and it is the basis of Pope Francis’ call to us with St. Francis’ words of loving attention: ‘Fratelli tutti’…” Rowlands said.