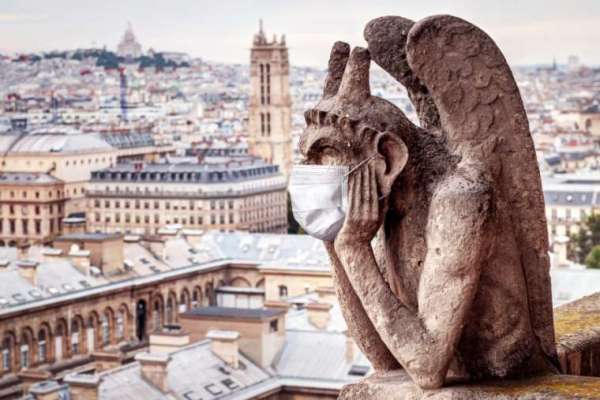 Rome Newsroom, Nov 25, 2020 / 07:00 am (CNA).- After a strong reaction by French Catholics to the government’s decision Tuesday night to limit Mass attendance to 30 people per church during Advent, bishops are in negotiations with the government to determine a more “realistic gauge” for a gradual resumption of public Masses.

The French bishops’ conference issued a statement Nov. 24, saying that the bishops were “both disappointed and surprised” at President Emmanuel Macron’s announcement that public worship would be limited to 30 people per church.

“This announcement is not at all in line with the discussions that have taken place in recent weeks with the ministers concerned,” it said.

“Indeed, this unrealistic and inapplicable measure is completely disrespectful of the reality of the religious practice of Catholics.”

The French bishops had originally proposed a protocol of reopening public liturgies at a third of each church’s capacity, with increased social distancing.

Following Macron’s announcement, some bishops took to social media to express their incredulity.

Bishop Éric de Moulins-Beaufort, president of the French bishops’ conference, spoke on the telephone with President Macron later that evening.

Following the phone call, the French bishops announced Nov. 25 that a more “realistic gauge” for the resumption of public Masses would be determined by the government the following day.

France has been hit hard by the coronavirus pandemic, with more than two million recorded cases and over 50,000 deaths as of Nov. 25, according to the Johns Hopkins Coronavirus Resource Center.

The reassessed restrictions on public Masses are expected be introduced in two stages, with the undetermined restrictions “remaining strict” from Nov. 28. They will then be evaluated on Dec. 15, according to the bishops’ statement.

French bishops added that they would remain in “dialogue with the office of the Prime Minister and the Ministry of the Interior.”

France has been under a strict lockdown since the end of October, in which all public religious gatherings, including public Masses, were originally suspended until Dec. 1.

French bishops announced Nov. 2 that they were filing an urgent appeal with the Council of State to continue public Masses, arguing that the government’s coronavirus lockdown decree was “out of proportion” and “violates the freedom of worship which is one of the fundamental freedoms in our country.”

The bishops’ appeal was rejected by the Council of State on Nov. 7. But, in response, the judge specified that churches would remain open and that Catholics would be able visit a church near their homes regardless of distance if they carried out the necessary paperwork. Priests would also be allowed to visit people in their homes and chaplains permitted to visit hospitals.

Catholics took to the streets in major cities across the country to protest against the public Mass ban, praying together outside their churches.

The French bishops said on Tuesday that Macron’s decision to reauthorize public worship with a limitation of 30 people seemed to “ignore this sense of responsibility which they [Catholics] have already demonstrated since the start of the epidemic.”

“Catholics are aware of the health issues and are capable of showing full responsibility in the application of the rules of protection,” they said.

“The Advent season which opens before us is a fundamental time of preparation for Christmas. The Sunday gathering is an essential step for the faithful during this period.”