From St. Nicholas to St. Stephen: Meet the Saints of Christmas 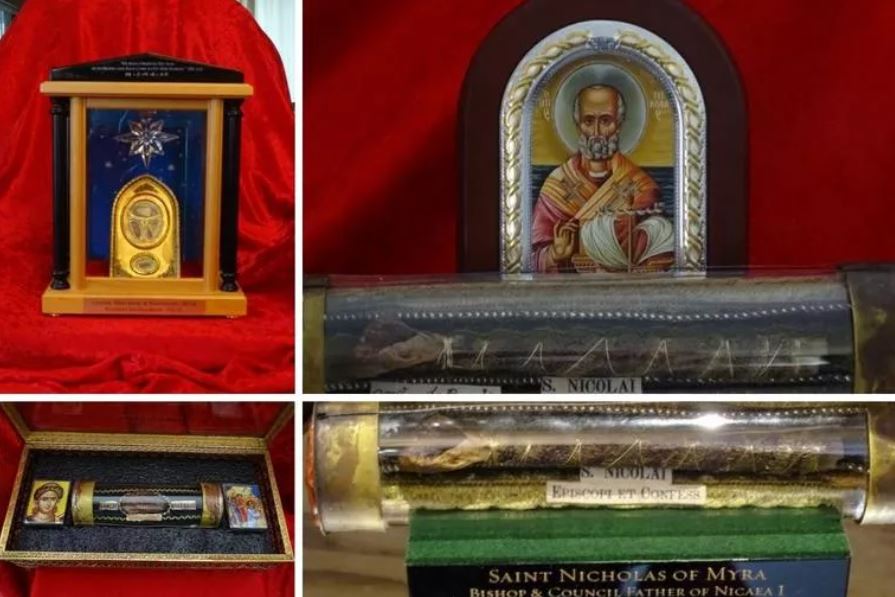 From St. Nicholas to St. Stephen: Meet the Saints of Christmas

The Saints of Christmas

Christmas is a season of giving, so it is natural that it is also a season of saints. At All Saints Shrine in Livonia, Michigan, home to around 200 relics, many are from saints who gave their lives — literally, as martyrs — to Christ, and some of these saints are often associated with the celebration of Christmas.

Father Joseph Marquis, pastor of Sacred Heart Byzantine Church that houses the shrine, culled through the many relics displayed in the beautiful, custom-made reliquaries and is displaying many associated with this holy season for veneration during Holy Hours every Wednesday from 1 to 4pm.

Some of these precious relics of Christmas are connected directly to the Holy Family. “I have a splinter believed to be from the crib of Jesus at the time when he was visited by the Magi,” Father Marquis told the Register. “It is in a reliquary with relics from the Magi, Melchior, Gaspar [also called Caspar] and Balthazar.”

He has a small stone fragment from the spot in the cave in Bethlehem identified as the place where Jesus was born. In the grotto underneath Bethlehem’s Church of the Nativity, a silver 14-pointed star, embedded into the grotto’s marble floor, marks the traditional site of Jesus’ birth. “In the early ’90s, they were putting a new star on the spot where the Christ Child was born,” Father Marquis explained.

“A parishioner had a stone fragment from it and gave it to me.”

A fragment of the Blessed Mother’s veil is in a case under a magnifier so that the weave can be seen, and there is a small sandstone fragment from St. Joseph’s house in Nazareth.

A Russian icon of St. Anne and Joachim with their cheeks touching, titled Conception of Anna, represents the conception of Mary, which is celebrated as the Solemnity of the Immaculate Conception on Dec. 8. The icon holds bone fragments of St. Anne, and there is also a crystal tiffany glass reliquary holding some of her bone fragments.

In addition, some of the martyrs with relics at the shrine will be brought out for veneration around and during the Christmas season:

— St. Andrew the Apostle, the brother of St. Peter who died in the year 60, is celebrated each Nov. 30. The brothers were called by Jesus from their fishing on the Sea of Galilee to follow him, promising that he would make them fishers of men.

“As Jesus was walking beside the Sea of Galilee, he saw two brothers, called Peter and his brother Andrew. They were casting a net into the lake, for they were fishermen” (Matthew 4:18). It is reported that he died by crucifixion on an X-shaped cross, requesting that cross because he did not feel worthy to be on a cross in the same manner as Jesus.

— St. Tarcisius was a 12-year-old boy, the only son of his widowed mother during the third century. Christians gathered for daily Mass in a secret meeting place in the catacombs since it was a time of persecution. A deacon would carry the Eucharist to condemned Christians in prison. One day, no deacon was available, so St. Tarcisius volunteered to bring Communion to the prisoners. En route, a group of non-Christian boys asked him to join their games, but he refused. They noticed Tarcisius carrying something and wanted to see what it was. When he refused, they beat him. Another Christian came to Tarcisius’ rescue and carried him back to the catacombs, but he died on the way from his injuries.

— St. Stephen was a deacon in Jerusalem who died by stoning in the year 36 in Jerusalem. His feast day is Dec. 26. In Acts 6 of the New Testament, Stephen is mentioned as participating in the distribution of welfare to the Greek-speaking widows. Starting in verse 8, Stephen is seen performing miracles and preaching at a synagogue. Some members of the synagogue argued with his teachings and accused him of blasphemy. Stephen was arrested. At his trial, he made a speech denouncing the Jewish authorities sitting in judgment on him and was then stoned to death. His martyrdom was witnessed by Saul of Tarsus, who would later convert and become known as St. Paul.

She had consecrated her virginity to God, but her mother, Eutychia, arranged a marriage for her daughter. Lucy prayed at the tomb of St. Agatha to change her mother’s mind, and after her mother’s long hemorrhagic illness was cured, she consented to Lucy consecrating herself to God. But the rejected bridegroom denounced Lucy as a Christian. The governor decided to force her into prostitution, but when guards came for her, Lucy was immovable. Not even a team of oxen could get her to budge. The governor then ordered her to be killed. She was tortured, and her eyes were torn out. Lucy was then surrounded with wood to be burned to death, but the fire quickly died out. She was then stabbed to death with a dagger. When her body was prepared for burial, it was discovered that her eyes had been miraculously restored.

— St. Jucunda died in 466 in Reggio di Lombardia, Italy. According to Father Marquis’ investigation of her life, she died during a midnight Eucharistic liturgy when the church was set on fire. A bishop was celebrating the liturgy when they heard a rattle at the door and realized they were trapped. “Jucanda was trying to smuggle the bishop out, because without the bishop, we don’t have priests and don’t have the sacraments,” Father Marquis explained.

— St. Nicholas is the saintly template for Santa. He was a real-life Catholic bishop born during the third century in present-day Turkey who became known as Santa Claus from the name Sinter Klaas, which the Dutch called their favorite saint, St. Nicholas. Although his reputation has been blurred with Christmas-themed associations, he is in fact a saint who died on Dec. 6, 345, at the age of 75, and he still inspires the joy of giving.

Father Marquis’ devotion to the saints actually began during his childhood, through a deep love of St. Nicholas. Seeking the relics of St. Nicholas a few years ago started him collecting others, especially saints from the early Church.

“My prayer life has really taken off since I’ve acquired the relics,” Father Marquis said. “I believe these saints are praying for me and with me. I think they are important and have seen a resurgence of an interest in saints, especially among young people.”

May these saints inspire us — and let us carry in our hearts the saying attributed to St. Nicholas, “The giver of every good and perfect gift has called upon us to mimic God’s giving, by grace, through faith, and this is not of ourselves.”
Share With:
Previous Article

An Advent Retreat: Yours for the A...