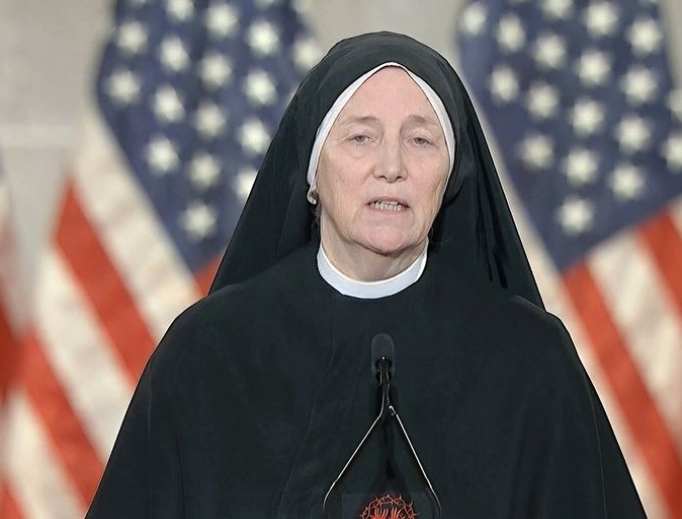 Sister Deirdre Byrne spoke passionately about the sanctity of life at the RNC saying, “While we tend to think of the marginalized as living beyond our borders, the truth is the largest marginalized group in the world can be found here in the United States. They are the unborn.”

Editor’s Note:Sr. Deirdre “Dede” Byrne was among the speakers at the 2020 Republican National Convention. Now a Catholic religious sister, Sister Byrnepreviously servedas a surgeon, retired army officer, and missionary. The full text of her speech, delivered August 26, is below:

Good evening. I am Sister Dede Byrne, and I belong to the Community of the Little Workers of the Sacred Hearts of Jesus and Mary. Last Fourth of July, I was honored to be one of the president’s guests at his Salute to America celebration. I must confess that I recently prayed while in chapel, begging God to allow me to be a voice, an instrument for human life. And now here I am, speaking at the Republican National Convention. I guess you’d better be careful what you pray for. My journey to religious life was not a traditional route, if there is such a thing. In 1978, as a medical school student at Georgetown University, I joined the Army to help pay for my tuition, and ended up devoting 29 years to the military, serving as a doctor and a surgeon in places like Afghanistan and Egypt’s Sinai Peninsula. After much prayer and contemplation, I entered my religious order in 2002, working to serve the poor and the sick in Haiti, Sudan, Kenya, Iraq and in Washington, D.C. Humility is at the foundation of our order, which makes it very difficult to talk about myself. But I can speak about my experience working for those fleeing war-torn and impoverished countries all around the world. Those refugees all share a common experience. They have all been marginalized, viewed as insignificant, powerless and voiceless. And while we tend to think of the marginalized as living beyond our borders, the truth is the largest marginalized group in the world can be found here in the United States. They are the unborn. As Christians, we first met Jesus as a stirring embryo in the womb of an unwed mother and saw him born nine months later in the poverty of the cave. It is no coincidence that Jesus stood up for what was just and was ultimately crucified because what he said was not politically correct or fashionable. As followers of Christ, we are called to stand up for life against the politically correct or fashionable of today. We must fight against a legislative agenda that supports and even celebrates destroying life in the womb. Keep in mind, the laws we create define how we see our humanity. We must ask ourselves: What we are saying when we go into a womb and snuff out an innocent, powerless, voiceless life? As a physician, I can say without hesitation: Life begins at conception. While what I have to say may be difficult for some to hear, I am saying it because I am not just pro-life, I am pro-eternal life. I want all of us to end up in heaven together someday. Which brings me to why I am here today. Donald Trump is the most pro-life president this nation has ever had, defending life at all stages. His belief in the sanctity of life transcends politics. President Trump will stand up against Biden-Harris, who are the most anti-life presidential ticket ever, even supporting the horrors of late-term abortion and infanticide. Because of his courage and conviction, President Trump has earned the support of America’s pro-life community. Moreover, he has a nationwide of religious standing behind him. You’ll find us here with our weapon of choice, the rosary. Thank you, Mr. President, we are all praying for you.