Explore the many ways to tune in!

Getting your home connected to EWTN’s free Global Catholic Television and Radio is probably easier than you think. You just need one of the technologies listed on this page. EWTN is always free and does not require a subscription.

Perhaps the easiest method of receiving EWTN is to via our website https://ewtn.co.uk.

If you need a hand getting set up don’t struggle on your own. Contact us and we will be happy to help.

If you don’t have or want satellite take a look at Amazon Fire TV and Roku. These are low-cost technologies that will bring EWTN’s free Catholic Television & Radio into your family’s living room.

You can connect to EWTN in your car or on the move with your mobile device. You can also download Radio show broadcasts from this website for offline listening.

Another popular method is to download the EWTN mobile app from the Apple or Google app store. Watch this!

Get EWTN via our partners:

EWTN is available on both Sky (subscription) and Sky Freesat (no subscription). Both provide parental control.

EWTN Radio is available to all Sky viewers on EPG Channel 0147 under the “Radio” category.

Sky Freesat includes a satellite dish, receiver and installation for a one-off payment. There are no monthly or other charges. With Sky Freesat you can watch EWTN and all free to view channels, including the traditional BBC and ITV channels.

Subscribers to Sky can cancel their subscription at the end of their contract, and continue to view EWTN and the 200+ free channels.

The Amazon Echo devices are popular for streaming EWTN radio through a simple voice command. Then there’s also Amazon Fire TV – a small device that allows you to watch EWTN on any TV!

Amazon Fire TV is a low-cost technology that uses your domestic broadband internet to stream EWTN to your TV. It’s simple to set up and use. This sort of technology represents the future of television and radio in general, as older technologies merge with the ever-expanding internet.

There are no ongoing or monthly charges for Amazon Fire TV itself; just an initial one-off payment to purchase the device from Amazon. The only ongoing expense is your existing internet connection.

While Amazon Fire TV offers many channels – movies and TV shows, sports, music, games, and more – you can use Amazon Fire TV just to receive EWTN if you prefer. Amazon Fire TV provides parental controls and allows you to uninstall channels you do not want. EWTN is, of course, a free channel. To install EWTN simply search for “EWTN” and choose to install it. (Please note that to locate the EWTN app you may need to use voice search using either a Voice Remote or the Amazon Fire TV app on your mobile device which you can download free from your mobile device’s app store.)

To learn more about Amazon Fire TV please visit Amazon’s website. Various models are available, but the more recent will work with EWTN.

For technical support and setup enquiries, use the Amazon Fire TV support centre. Please also feel free to contact us.

Roku, similar to Amazon Fire TV, is a small device that allows you to watch EWTN on your living room TV. All you need is a broadband internet connection.

Roku is a low-cost technology that uses your domestic broadband internet to stream EWTN to your ordinary TV. It’s simple to set up and use. This sort of technology represents the future of television and radio in general, as older technologies merge with the ever-expanding internet.

There are no ongoing or monthly charges for Roku itself; just an initial one-off payment to purchase the device from Roku. The only ongoing expense is your internet connection.

While Roku offers many channels – movies and TV shows, sports, music, games, and more – you can use Roku just to receive EWTN if you prefer. EWTN can be found in the Roku “Channel Store” under the “Religious” category. EWTN is, of course, a free channel.

To learn more about Roku please visit Roku UK. Various models are available and all work with EWTN.

For technical and setup enquiries, you can telephone Roku directly on their UK support line (see their website) or chat with them via their website’s support page. Please also feel free to contact us.

Apple TV, similar to the less expensive Amazon Fire TV and Roku, is a small device that allows you to watch EWTN on any TV.

Apple TV uses your domestic broadband internet to stream EWTN to your ordinary TV. Apple TV connects to your TV via an HDMI input.

There are no ongoing or monthly charges for Apple TV itself; just an initial one-off payment to purchase the device from Amazon. The only ongoing expense is your existing internet connection.

Setup is simple using a simple mobile app, or using your desktop or laptop. Once it’s ready you can visit EWTN’s websites and “cast” the live EWTN Television and Radio, as well as past episodes of your favourite EWTN shows, to your ordinary TV. You select and initiate “casting” using your mobile device, laptop, or desktop computer.

There are no ongoing or monthly charges for the Google Chromecast itself; just an initial one-off payment to purchase the device from Google. The only ongoing expense is your internet connection.

Although EWTN is not included in the BBC/ITV Freesat EPG, both EWTN Television (Europe/UK) and EWTN Radio should be available to you via your BBC/ITV Freesat receiver. BBC/ITV Freesat dishes are set to receive from Astra 2 satellites (see above). Under EU Law every satellite receiver must be capable of tuning in to all available channels on the satellite.

Some receivers allow you to automatically tune to a list of hundreds of free to view channels on Astra 2 satellites, from which you can choose EWTN and others to be included in your “Favourites” list. Other receivers require manual tuning to locate a particular channel among the free to view channels on the satellite; in this case follow the manufacturer’s instructions and enter EWTN’s frequency, symbol rate and polarity details for the Astra 2G Satellite (see above).

Receiver manufacturers often offer a technical support helpline which you can call if you need more help with tuning.

Confused about how to configure your satellite equipment? Contact us and we can help

For those comfortable configuring satellite equipment, the technical information is as follows:

EWTN Television (Europe/UK), but not EWTN Radio, is also broadcast on the Hot Bird 13D Satellite, but relatively few other English language channels are broadcast from this satellite. Italian speakers may wish to choose Hot Bird 13D because many Italian channels are broadcast free to view – including the three religious channels Telepace, TV 2000 and Padre Pio. Besides Italian, Polish and other Eastern European programmes, as well as Arabic, prevail.

Some TVs come with an integrated satellite connection, meaning that the dish cable can be inserted directly into the TV and a satellite receiver is not needed. If you purchase a satellite dish and receiver from a local supplier who also offers installation, expect to pay a one-off cost of £200-300.

Once you are set up you can also receive all other free to view channels which include more than 200 English language channels, including the traditional BBC and ITV channels. These are available on the nearby Astra 2 satellite.

It’s now easier than ever to listen to EWTN Radio! 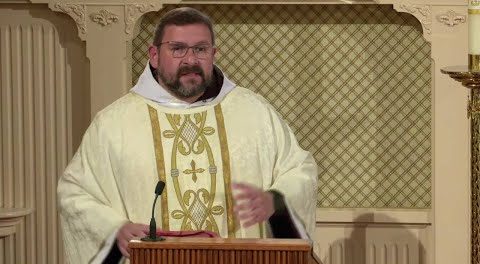