‘Go to Joseph’: Diocese of Lafayette kicks off Year of St Joseph 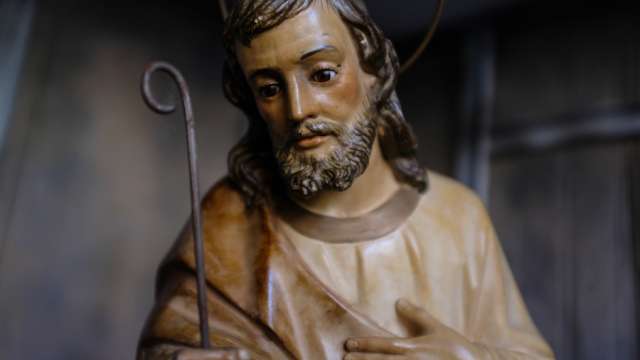 ‘Go to Joseph’: Diocese of Lafayette kicks off Year of St Joseph

“We waited until our diocese and the state of Louisiana was at a safe point in our recovery,” Blue Rolfes, the communications director for the diocese, told CNA. She said they consulted the state’s Department of Health before the launch, and they were on board with the August start date. “We’re just excited that we were going to be able to do it after all,” Rolfes said. Bishop Douglas Deshotel of Lafayette started the year Aug. 17 by celebrating Mass at St. Joseph parish in Patterson, one of 13 parishes in the diocese named after the saint.

There is “not one recorded word of St. Joseph spoken in the Gospel,” Deshotel said in his homily. “But we know him as a man of action.” “Spiritual writers give St. Joseph many attributes, saying he was a very religious man, he was civic-minded, humble, a hard worker, obedient to the will of God, a provider to his family, Jesus and Mary, and the protector of the holy family,” he said. The bishop noted that the diocese had chosen to celebrate this year as the Year of St. Joseph because it is the 150th anniversary of Bl. Pius IX declaring Saint Joseph patron of the universal Church in 1870.
“As St. Joseph cared for the holy family of Jesus and Mary, we ask him during this year to care for the Church. The Church is the body of Christ, as St. Joseph loved and cared for and protected Jesus, we ask him to do the same for the Church,” Deshotel said. But even though St. Joseph was a quiet man, Rolfes said, he is one of the greatest saints of the Church. “He wasn’t martyred, he didn’t go out in blaze of glory. But the contributions that he made to our faith and our Church, and to the life of Jesus are just secondary to none,” Rolfes said. “He was asked by God to do the unthinkable, especially back then, very much as Mary was. And he immediately obeyed and said that he would follow God’s request. And because of that, he was able to become Christ’s earthly father, foster father,” Rolfes said. As the protector of the Holy Family and the chaste spouse of the Blessed Virgin Mary, “he set a wonderful standard for fathers, for human fathers for the rest of eternity,” Rolfes added. Catholics in the Diocese of Lafayette can participate in the year in many ways, Rolfes noted, including by making a pilgrimage to any of the parishes named for St. Joseph in the diocese, by participating in the parish missions about St. Joseph, and by participating in the St. Joseph Workday at their parishes.

A Year of St. Joseph pamphlet contains photos of each St. Joseph parish that may be visited, and pilgrims can receive stamps at each parish, indicating that they have made a pilgrimage there. The pamphlets also include prayers to St. Joseph, such as the Litany of St. Joseph, that may be prayed throughout the year. Pope Francis has also granted a plenary indulgence to Catholics in the diocese who make a pilgrimage to at least one of the parishes, and meet the other ordinary conditions of receiving a plenary indulgence: that the individual be in the state of grace by the completion of the acts, have complete detachment from sin, and pray for the Pope’s intentions. The person must also sacramentally confess their sins and receive Communion, up to about twenty days before or after the indulgenced act.
Rolfes said she thought St. Joseph was a strong example and witness for all Catholics during this time in history.

“The society and the culture that we live in now is so divisive in so many ways, and not only politically, but also on a lot of other different levels,” she said. “And I think St. Joseph is a wonderful example to us of staying true to the faith and being strong, and doing what God asks of us. And caring more for others than we care for ourselves. I think he’s a wonderful role model for fathers, definitely, but for all of us,” she said.

The Year of St. Joseph in the Diocese of Lafayette will conclude May 1, 2021, the Feast of St. Joseph the Worker, with a closing Mass at St. Joseph Church in Milton.

“We’re asking everyone to go to Joseph, to take all of their concerns and worries and fears and anxieties…and requests and prayers. Go to Joseph during this year.”