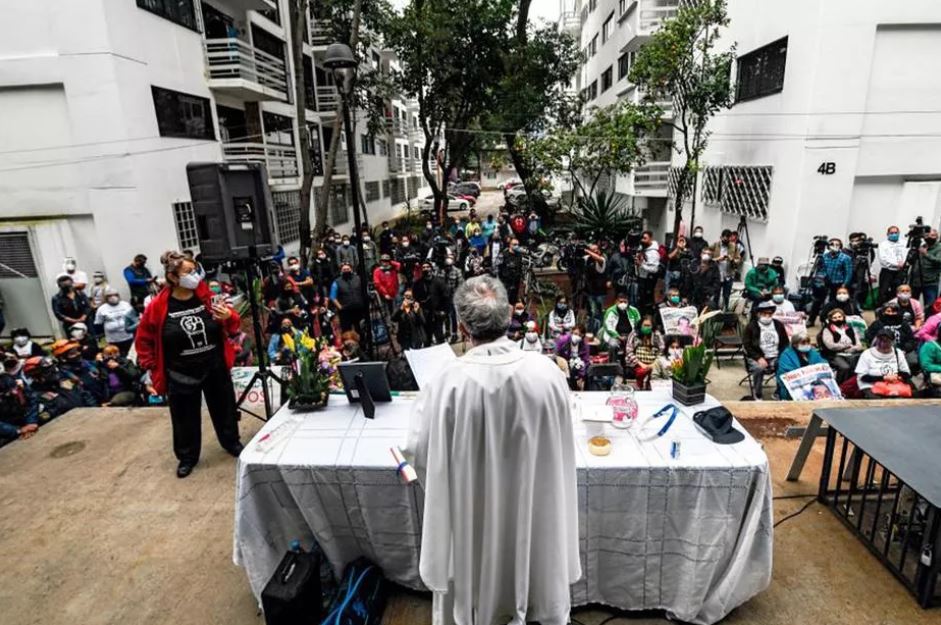 Mass in coronavirus time becomes an incidental public witness to the faith in secular cities.

Out of the many tragedies of coronavirus days — from lost lives to missed playdates, from broken marriages to unemployment — has been the silencing of music. While it certainly does not deserve to be classed with more major, life-altering events, music is one of those things that makes life worth living. But now Broadway is online; community theaters are shuttered; church choirs are disbanded in favor of cantors or — nothing at all.

Nor is this a trivial alteration, the cancellation of one sort of “entertainment” that can easily be replaced by another, as if knitting parties by Zoom could somehow sate the human spirit’s need for song. Music is unique: its presence in every culture, its uselessness, and its frequent employment in worship suggest that it answers a universal desire to express something deep in human nature, even something transcendent. Its unique role earns it a cameo inThe Screwtape Letters, where C.S. Lewis puts the following sentiments in the mouth of the experienced demon instructing a junior tempter:

The whole house and garden [of a certain girl] is one vast obscenity. It bears a sickening resemblance to the description one human writer made of Heaven: ‘the regions where there is only life and therefore all that is not music is silence.’Music and silence — how I detest them both! How thankful we should be that ever since Our Father entered Hell—though longer ago than humans, reckoning in light years, could express—no square inch of infernal space and no moment of infernal time has been surrendered to either of those abominable forces, but all has been occupied by Noise — Noise, the grand dynamism, the audible expression of all that is exultant, ruthless, and virile — Noise which alone defends us from silly qualms, despairing scruples, and impossible desires. We will make the whole universe a noise in the end. We have already made great strides in this direction as regards the Earth. The melodies and silences of Heaven will be shouted down in the end. But I admit we are not yet loud enough, or anything like it.”

Music and silence are, of course, the two modes that lift the liturgy into the sacred. In the traditional Latin rite the canon is silent orsotto voce; in the Eastern churches it is sung. Even today, the option to chant or speak quietly for the canon is present in the Novus Ordo, and adopted on solemn occasions like Christmas and Easter. (Now, if only more priests could treat every Mass as a solemn occasion!) And of course, congregational participation in hymn singing is a part of the liturgy for most Christian churches in America.

It seemed, therefore, like a particularly cruel joke from an infernal perspective that music got the ax early in coronavirus time. Multiple cases and two deaths resulting from a choir practice in Mount Vernon were followed by videos and expert testimonies about how singing might spread water droplets carrying the virus, infecting far more people than mere conversation. So the singing stopped, even in those places where services were still being held (distanced, with masks, etc., etc., etc.). It wasn’t as if Catholics were ever very good about singing in the first place; now, we might as well all be deaf and mute.

But then a funny thing happened. As the shutdowns dragged on and congregations in locked-down areas became more and more frustrated with their inability to attend Mass, bishops moved for, and state authorities granted permission to, hold Masses outside.

So if you drove down Anywhere Avenue in a major U.S. city this morning, you would have been greeted by a strange sight. A priest, who might or might not have donned sunglasses against the morning glare. A couple of servers. A congregation of some 40 people, masked, standing six or 10 or 20 feet apart from each other, in the parking lot or on the grass lawns alongside. Ladies with parasols against the sun. Men wearing hats who never wore hats to church before. Some standing, some kneeling, all attentively focused on the altar while through the traffic and across Anywhere Avenue towards the apartments and the tenements and the not-quite-tony houses with their patched lawns, the consecration bells ring.

All very safe and legal; everything squared away with the authorities. A bit inconvenient, and we’ll be glad when we can use the church again, and no word out on the contingency plan (if any) for when it rains. It took a while to get to this point; and there is of course no singing.

But if you asked me whether it was worth it, for a few months or a year, to trade singing for the incidental witness of a suddenly public Mass in a largely pagan city … the tradeoff would have pained me, but I hope I would have made it.

God gets the last laugh, and not always only at the end of time, but sometimes in these middling troubles of ours as well.