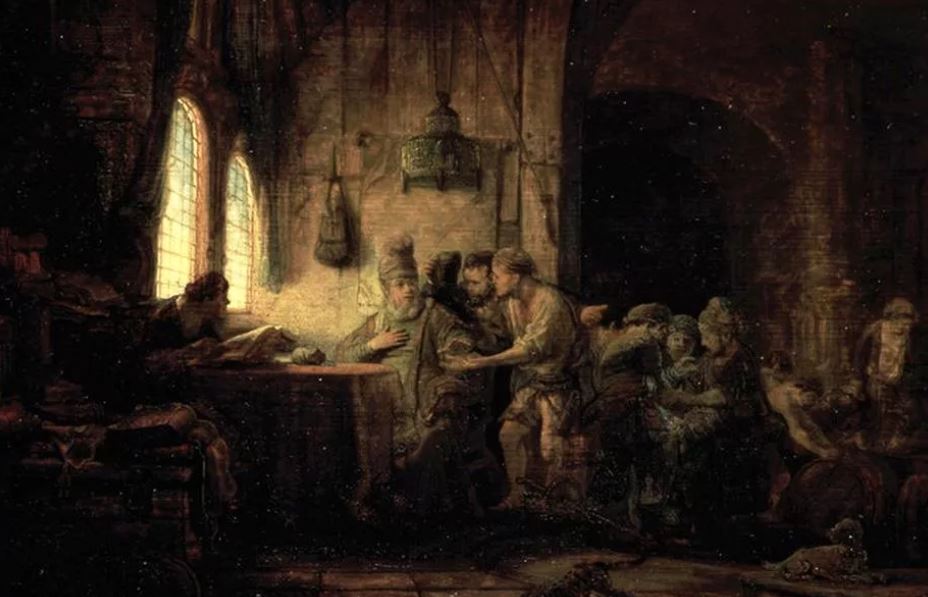 Every parent knows that the risk of freedom means the possibility of rejection.

Last Sunday’s readings focused on an unproductive vineyard. Both the prophet Isaiah and Jesus speak of vineyards planted with care, tended with solicitude, protected and defended, but which — when the time came to provide a harvest — came up short.

One would think that those readings would speak especially to our day. Ours is a culture focused on results. We plan incessantly for various contingencies. We invest time and money in “outcomes.” There are supposedly parents who synchronize conception so their precious “parental project” will come into the world in time to be eligible for that coveted place in the “right” preschool that opens up in four or five years, the Ivy League nursery school that will get little John or Mary on the fast track to Harvard.

Let’s stay on that parental theme for a minute. We call — indeed, have it on divine authority to call — God “Our Father.” God is he from whom “every family on earth and in heaven derives its name” (Ephesians 3:15).

Many parents have experienced disappointment when it comes to a child. I am not talking about disappointment arising from a child living his own life instead of his father’s or mother’s, who “failed” to be the person through whom a frustrated parent might have vicariously wanted to live. That is no reason for disappointment (except, perhaps, in the parent whose understanding of his vocation is so shallow).

What I’m speaking of is when, despite a parent’s best efforts, a child turns to evil, falls away from the faith or freely chooses self-destructive behavior. When a child makes such choices, how many parents ask themselves “what did I do wrong? What else, what more could I have done?” Notwithstanding their best efforts to anchor a child in the good, their efforts seem to have been in vain.

Two things ought to flow from those reflections:

The Problem of Freedom

Just as a parent must reckon with the eventuality that, given freedom, a child may abuse it, so must God — but that is the risk and cost of love. One’s child is always one’s child, but once a child reaches adulthood, the risk of freedom means the child’s possibility of rejection. Rarely (though not unheard of) is that rejectionpersonal —“I reject you, mom,” or “I reject you, dad.” More often that rejection is of the values a parent holds: “I ‘love’ you, mom, but…” Fill in the blank: “I don’t believe in Church,” “I don’t go to Mass,” “I live with my boy/girlfriend,” “I don’t see a need for us to be married,” “we won’t have kids,” and so on.

While we can always be hopeful that the “personal” link might help change the attitude towards other values, parents also recognize the bond betweenwhothey are andwhatthey espouse. That connection perhaps will help us understand why “love” of God is ultimately inseparable from the Commandments (see John 14:15; 1 John 2:4): God does not simply impose “moral rules” like “do not kill” or “do not commit adultery” because he’s bigger and more powerful and entitled to, but because one cannot really love God and be a murderer or an adulterer, etc.

In recognizing the coherence betweenwhowe are andwhatwe espouse, we understand better the connection between the love of God and the moral order. We, of course, are not as perfect as God and so our own espousal of those values is often inadequate, incomplete, or hypocritical, but that’s not my point here (even if it contributed to the choices our children make). My point is simply to realize, from our own, incomplete experience, how our moral rejection of God — despite all the efforts he’s put into us — must “feel” to him.

It should also cause us to think about the risk freedom poses. While a parent hopes a loving child will embrace the values a parent does, freedom is the risk he may not. That is the risk of the mystery of the person, whom God madealteri incommunicabilis,a fancy Scholastic term that simply means “incommunicable to others.” No matter what, no one else can will for me. No matter what, nobody else can choose for me. That is what Vatican II refers to when it speaks of conscience as an “inner sanctuary” (Gaudium et spes,16). The Council doesnotmean conscience is free to make up its own morality: when it comes to right or wrong, conscience is a mirror, not a loom. It reflects right or wrong, it does not spin it out of whole cloth.

What the Councildoesmean is that free will chooses whom I choose to make myself, good or evil. That’s why Plato and Aristotle said that it is far worse to do evil than to suffer it: the former makes me into a good or bad person (which is why contemporary assaults on conscience are such violations of human dignity). And the person I make myself into is the person who stands before God.

A parent may not approve of the person a child has made himself into, and many parents suffer from such choices. Perhaps they can better understand God. The answer is not, however, pretending that “love” means conforming values like truth, goodness and life to another’s preferences, but in recognizing that there is a dissonance which — however much we may wish otherwise —exists.

The Problem of Fruit

Both Isaiah and Jesus, after all, do not pretend that everything is okay and the vineyard is “good” despite yielding wild grapes or its tenant farmers killing rent collectors or the owner’s child. Freedom does not excuse from the responsibility to bear fruit, whose quantity and quality can be judged.

Isaiah finds fault in the well-cared-for vineyard that yielded but wild grapes. Jesus finds fault with the vineyard workers who refuse the owner’s share and kill his emissaries. Elsewhere, Jesus finds fault with the well-tended fig tree that bears no fruit (Luke 13:6-9), even being so “unmerciful” as to order it cut down. (Elsewhere he curses the fig tree that puts on a show of foliage but is also bereft of any fruit — see Matthew 21:18-20.) Jesus also notes that, the sower’s diligence notwithstanding, some seed yields a lesser harvest (“thirty-fold”) while other a bounty (“hundred-fold) (see Matthew 13:8-9).

Apart from Christ, we are barren. Grafted into Christ the Vine by Baptism, we are branches that are supposed to bear fruit (see John 15:1-8). Again, Jesus scores the Christian, the servant, in whom he has made an investment that, rather than producing a yield, hardly returns the principle (see Matthew 25: 24-30). In Polish, we have an expression (and not a complimentary one) about this kind of spiritual posture: “tak mnie stworzy?e?, Panie Bo?e, i tak mnie masz” —“that’s how you made me, God, and that’s what you’ve got,” as if we have no role to play in whom we become.

The parables of the vineyard have a lot to say to us — especially us parents — about our engagement in other’s lives and God’s in ours, and of the disappointment we sometimes feel when those efforts yield only perhaps bitter grapes. “Let him who has ears to listen, let him hear.”