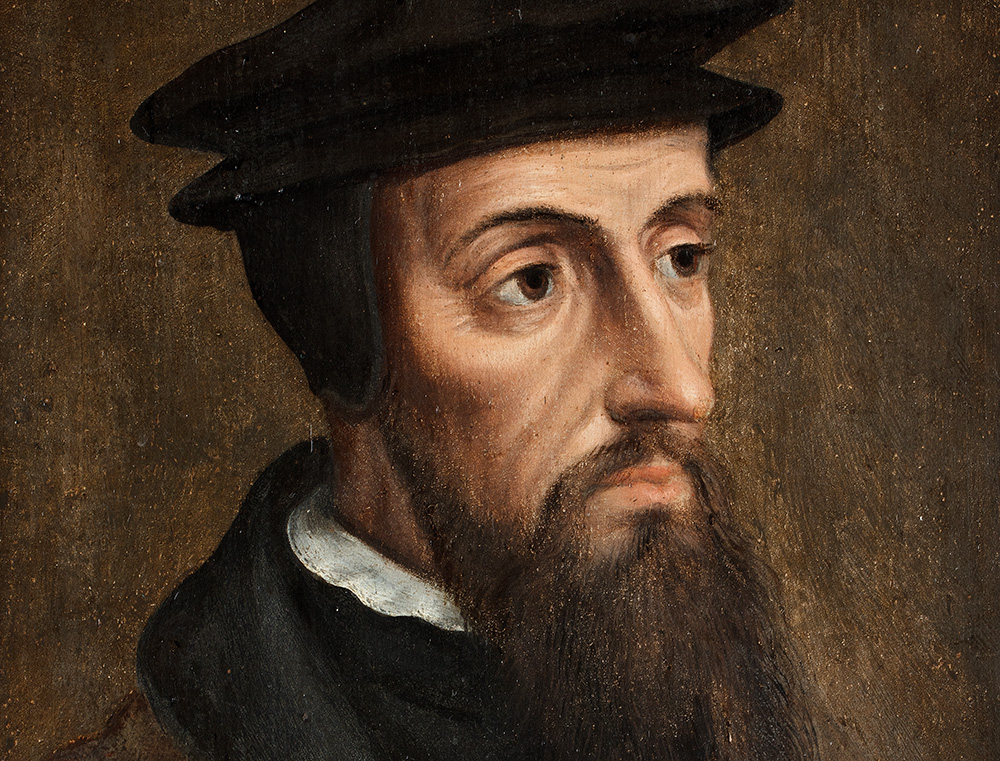 One of the primary founders of Protestantism, John Calvin, wrote:

It will be beyond dispute, that free will does not enable any man to perform good works, unless he is assisted by grace; indeed, the special grace which the elect alone receive through regeneration. (II, 2:6)

In the perverted and degenerate nature of man there are still some sparks which show that he is a rational animal, and differs from the brutes, inasmuch as he is endued with intelligence, and yet, that this light is so smothered by clouds of darkness that it cannot shine forth to any good effect. (II, 2:12) (Institutes of the Christian Religion, translated by Henry Beveridge, produced for the Calvin Translation Society in 1845, from the 1559 edition in Latin; available online in the public domain)

Catholics heartily agree with Calvinists that unregenerate man is utterly unable tosave himselfor able to doanything whatsoeverto turn to God and be justified or regenerated. That canonlyhappen as a result of God’s grace.

What we deny is the Calvinist notion of total depravity, such that unregenerate man is “utterly devoid of goodness” or “true good” and that “everything which proceeds from him is imputed as sin” and that he is “incapable of one righteous desire” and that he can perform no good works whatever unless assisted by “the special grace which the elect alone receive through regeneration.”

For Calvin, then, a truly good work is literally impossible unless a man has already been regenerated by God; hence can be enabled by His grace to do good works.

This is a false “tradition of men” – deriving from prior positions and a philosophy that isbrought toScripture, rather than from Scriptural revelation itself. It forces Holy Scripture into a view that it doesn’t teach: much like trying to force a square peg into a round hole.

What do we make of, for example, King Jehoshaphat? He was subjected to the wrath of God, yet nevertheless the Bible informs us that he possessed some “good” and even sought God:

2 Chronicles 19:2-3. . . Because of this,wrath has gone out against you from the LORD. [3] Neverthelesssome good is found in you, for you destroyed the Ashe’rahs out of the land, and haveset your heart to seek God.”

2 Chronicles 20:32He walked in the way of Asa his father and did not turn aside from it; he did what was right in the sight of the LORD.

Was King Jehoshaphat regenerated and hence ultimately saved? We simply don’t know. But if he wasn’t, he couldn’t do any true “good” at all, according to Calvin. The Bible clearly states that he “did what was right in the sight of the LORD”.

Yet it was a mixed record. He didn’t get rid of the “high places” (cf. 2 Chr 20:33,) which were shrines to idols, and the last thing we learn about him was that he was condemned by a prophet because he allied himself with wicked King Ahaziah of Israel. How about King Uzziah? The Bible says he sought God too:

2 Chronicles 26:4-5Andhe did what was right in the eyes of the LORD, . . . [5] Heset himself to seek Godin the days of Zechari’ah, who instructed him in the fear of God; andas long as he sought the LORD, God made him prosper.

But Uzziah met an even more tragic end than Jehoshaphat:

If Calvin wants to maintain that only a regenerate person can seek God and do any good at all, Uzziahmusthave been regenerated, but then how is his spiritualdemiseexplained (since Calvin and Calvinists also deny the possibility of a truly regenerate, elect person ever falling away (unconditional election, irresistible grace, and perseverance of the saints)? If Uzziah was saved in the end (as hemustbe in the Calvinist schema, if it is accepted that he ever did a good work), again there is no text whatsoever that would indicate such a thing.

The case of King Asa presents yet another similar difficulty for Calvin and the Calvinist theological system. He had an initial zeal for God (2 Chr 14:11; 15:8-13). He destroyed idols (15:16), excluding the ones in the high places (15:17a), “nevertheless the heart of Asa wasblamelessall his days” (15:17b). Yet in the next chapter we observe his spiritual demise or backsliding (apostasy?):

This scarcely presents King Asa as regenerated and saved. If not, how can it be claimed (under Calvin’s and Calvinists’ premises) that heever“relied on the LORD” (2 Chr 16:8)?