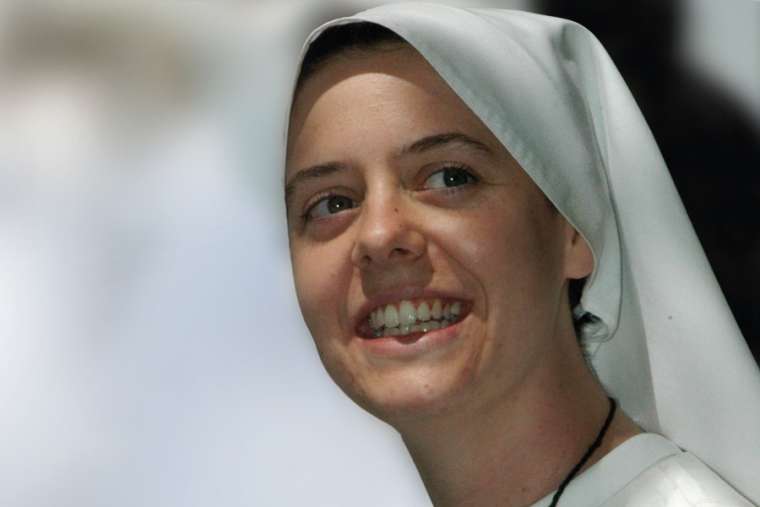 Two years after her death, her order released a film about her remarkable life in both English and Spanish.“All or Nothing: Sr. Clare Crockett”now has more than 3.5 million views on YouTube.

This month sees the publication of the first full-length biography of Sr. Clare, amid a growing cult around the woman who abandoned a promising television career to pursue her vocation.

“Sr. Clare Crockett: Alone with Christ Alone”is written by Sr. Kristen Gardner, who was also responsible for the documentary.

“The most important discovery was her personal writings,” Sr. Kristen told CNA. “She had several notebooks where she would write her personal reflections or prayers. It has been beautiful to see her interior life and her relationship with God. She had moments of darkness and struggle, but God’s love always triumphed.”

Sr. Clare was born in the divided city of Derry in Northern Ireland in 1982. A fun-loving, charismatic teenager, she quickly caught the attention of television producers. By the age of 15, she was contracted to present a show on Britain’s Channel 4 network. When Nickelodeon came calling, it was clear that she was on the road to stardom.

But in the year 2000, she went to Spain for a Holy Week retreat run by the Servant Sisters of the Home of the Mother, a community founded in 1982 with a focus on the Eucharist, Marian spirituality, and outreach to youth.

She recalled later in herpersonal testimonythat when she arrived in Spain she was “very superficial and a wild child.” But that began to change when she took part in the Good Friday adoration of the cross, kissing the feet of Jesus.

“I do not know how to explain exactly what happened. I did not see the choirs of angels or a white dove come down from the ceiling and descend on me, but I had the certainty that the Lord was on the Cross, for me,” she remembered.

“And along with that conviction, I felt a great sorrow, similar to what I had experienced when I was little and prayed the Stations of the Cross. When I returned to my pew, I already had imprinted in me something that was not there before. I had to do something for Him Who had given his life for me.”

It was the start of a long journey of conversion and healing that led to her joining the Sisters and taking her first vows in 2006.

“Her deepest desire was to have an undivided heart for God and for Him to totally transform her into Himself,” said Sr. Kristen. “She knew she could not achieve this on her own and she constantly begged His help, ‘Grant me an undivided heart. Do not let anything ever enter in between Your heart and mine.’”

Sr. Kristen, a native of Columbus, Ohio, who entered into the Servant Sisters in 2002, said that this prayer seemed to have been answered by the time Sr. Clare was sent on mission to South America, after stints in Spain and the United States.

“And right before going to Ecuador she wrote, ‘My heart is Yours, my mind is Yours, my thoughts are Yours. Ask me for anything. Nothing matters now, since nothing I have is mine! Possess me, Jesus,’” Sr. Kristen recalled.

“To see this strong interior life and relationship with God, which is what motivated her in her daily activity, to be generous and give her all to Him, was truly a blessing to discover and then to transmit in the book.”

Sr. Kristen, who is currently based in Rome, recalled that the news of Sr. Clare’s death spread rapidly around the world. The Sisters started to receive requests for more information about the 33-year-old’s life.

“We began to go through our archives to see what footage we had of Sr. Clare and we found quite a lot. The project to do a documentary about her life then began,” she said.

“Our way of going about it was quite simple: the communities of sisters in Spain, in the US and in Ecuador recorded interviews with the people who had known Sr. Clare. After about a year, all the material was gathered and I spent the summer of 2017 putting the film together. One of our sisters composed the music. All the sisters prayed. It was really a team effort.”

The film was released on April 16, 2018, the second anniversary of Sr. Clare’s death. The communitydidn’t pay for any ads to promote the documentary, but it quickly reached a globalaudience thanks to word-of-mouth recommendations.

“People simply are touched and forward it to their families and friends. I am shocked every time people tell me, ‘I can’t even count the number of times I’ve watched it…’ They watch it over and over again. Why? Because Our Lord has wished to touch people’s hearts through Sr. Clare’s testimony and life. There is no other explanation,” said Sr. Kristen.

“Thanks to the original footage of her, I think people are truly able to get to know her as she was: full of joy. We have many clips of her laughing and joking around, and I think this permits the viewers to see the true happiness that only God can give.”

In response to the growing interest, Sr. Kristen took on a second project: writing the first extendedbiography of Sr. Clare. Meanwhile, reports of miracles began to reach the sisters.

“Several married couples who had difficulties having children have written us to give thanks for Sr. Clare’s intercession,” she said. “A few have even named their baby girl after Sr. Clare.”

Sr. Kristen highlighted the caseof a couple who lost their baby daughter on the day she was born. The father, who had lived on the same street as Sr. Clare, prayed for his childhood friend’s intercession. The Sisters also prayed that his wife would be able to give birth to another child. Eventually, the couplewelcomed a new daughterinto the world.

This is just one ofseveral reportsof fertility miracles attributed to Sr. Clare’s intercession.

“We do not have certainty as to whether these pregnancies have an explanation on a natural level or not,” explained Sr. Kristen. “We would have to wait for future studies about each case and the Church will have to deem whether they are truly miracles or not. The fact is that these couples are very thankful to Sr. Clare.”

“In any case, beyond the reports of ‘miracles’ of this type or others of other types of physical healings, the most reports we receive are of spiritual miracles. And these are the most important.”

She continued: “There are people who were on the point of suicide and they have run into the documentary about Sr. Clare and they once again have hope and joy to live. Others were far from the Catholic Church and have found their faith again.”

“Others were living a lukewarm faith and Our Lord, through Sr. Clare’s testimony, has awoken them and given them new strength to give their all to the Lord and fight for holiness. Many young people have found the strength to respond to their vocation to the priesthood and religious life… and the list could go on.”

Sr. Kristen hopes that, after watching the documentary and reading about Sr. Clare’s life, people will be filled with a desire to follow the late sister’s example and give everything to God.She quoted from the Book of Job (7:1), where Job says “The life of man upon earth is a warfare.”

“It’s important to recognize that we are in a spiritual battle,” she stressed. “The devil is fighting for all of our souls and we cannot let him have the last word. So many souls depend on our generous ‘yes’ to God. We can see this in Sr. Clare’s own life — how many souls are reaching God through her testimony. What would have happened if she had said no?”