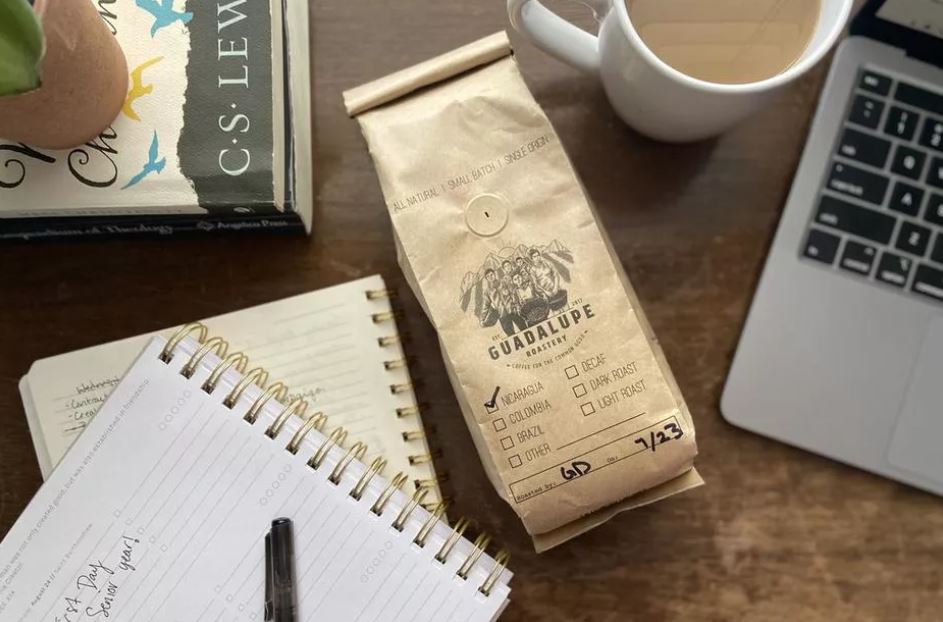 “Enjoy your coffee. Change the world.”

In those few words,Guadalupe Roasterysets out its vision for a new kind of private enterprise serving the common good that starts with the farmworkers who pick red, ripe coffee cherries and ends in a delicious cup of java.

The idea came to Catholic financier-turned-missionary Brad Fassbender while sharing the Gospel door to door with the Franciscan Friars of the Renewal in Honduras. He met farmworkers who could not afford a Bible and struggled to provide for their families on $5 a day to harvest the coffee beans that New York City baristas would turn into$10 lattes. Fassbender did his research, and as the years progressed,the wheels in his head began to turn.

“I just had this vision to simplify the supply chain and put more money in the pockets of the actual families doing the farming,” he said.

Fassbender poured his family’s financial resources into a new coffee venture guided from start to finish by the Catholic faith, and in 2016, Guadalupe Roastery was born.

“By helping others, and having God at the center of it, we can lift people out of poverty all over the world,” he said.

Backed by mission-driven investors and a marketing team sourced from Ave Maria University grads, the Florida-based Guadalupe Roastery has provided excellent subscription-based coffee sourced directly from Catholic farmers they have a direct relationship with, along with coffee from Colombia and Brazil supplemented by an ethical supplier. The company provides freshly roasted coffee from Colombia, Costa Rica, Honduras, Nicaragua and Papua New Guinea, packaged and shipped directly to consumers, as well as to companies, churches, stores and coffee shops.

Fassbender found the first partners he needed in Rolyn Garcia and Lorena Altamirano, a young Catholic husband and wife he met in 2015 who had both graduated from Ave Maria University’s then-satellite campus in Nicaragua. Garcia and Altamirano shared a deep, abiding Catholic faith, particularly in serving the poor and doing mission work. Altamirano had inherited her family coffee farm, and the Catholic couple loved Fassbender’s vision for Guadalupe Roastery.

“We wanted to look for a business that would help out others, too,” Altamirano said. “It’s not just about making money, but helping others, and we saw this [partnership] as a great way to do that.”

She added, “And we’ve a lot of coffee this year, thanks be to God.”

For Garcia and Altamirano, farming coffee is a vocation that keeps them (and their child) close to the land God asked people to care for. And they are close to their employees who harvest the coffee cherries and dry them under the sun before sending them directly to Guadalupe Roastery to be roasted and packaged.

Garcia and Altamirano’s farm is in a natural reserve in the mountains above Managua, about 1,200 to 1,800 miles above sea level, and the high elevation plus natural techniques they use help draw out the delightful citrus flavor of the coffee.

The mountains aid the flavor development of the coffee.(Photo: Guadalupe Roastery)

“The coffee’s great, and we’re working more to improve our processes,” Garcia said. “When you’re drinking our coffee you’re drinking the most naturally processed coffee.”

“We have to be the light of God to the people,” he said. “And we’re trying to do our part.”

Preaching the Gospel drives Fassbender, who added that people’s lives can be more open to the Gospel if their lives are not locked in a constant struggle to survive. So Fassbender wanted Guadalupe Roastery to operate on the basis that it would reconnect consumers with the people who make their coffee and work for “the common good,” one of the company’s four pillars.

“That’s the sum total of conditions that help people flourish to be who God intended them to be,” Fassbender said. The other three pillars are the “farmer family” (supporting the farmers, their families and communities), “sustainability” (caring for the environment, stopping the exploitation of farmers, and recycling resources); and “promotion of beauty” (drawing people closer to God through the beauty of what they provide as well as the beauty of the people who create the coffee).

Coffee is the most consumed beverage in the U.S. and supports a $225-billion industry in the U.S. alone,accordingto 2015 data from the National Coffee Association. But coffee prices are generally set by fluctuating coffee futures on the New York Stock Exchange. As of this article, coffee was trading at $1.10 per pound, less than half of what it was 10 years ago.

Farmers are at the bottom of the coffee-production chain, and unless they organize or develop direct relationships, they have little leverage in this system.

“They’re the price-takers,” explained Simone Blanchard, director of mission and mobilization at Catholic Relief Services (CRS), the international aid organization of the U.S. Catholic bishops. “There are many middlemen between the farmers and the coffee that’s poured into your cup. Every single person on that chain is taking a cut.”

Blanchard said “direct trade” and “fair trade” are two ways to cut out the middlemen, particularly the unscrupulous dealers known as “coyotes.” She said the “coyotes” stop by the farm with their trucks and give a cheap price that leverages the farmers’ desperation or ignorance of prices against them. Blanchard said these dealers can also snare farmers into a form of debt slavery by offering them loans at exorbitant interest rates that keep them impoverished.

CRS has worked to support farmers through a variety of ways. One is through cooperatives where farmers can pool resources together and sell their harvest for more. Another is to increase yields and improve soils. But another is to cut out the middlemen and connect to untapped local markets and overseas markets through “fair trade” or “direct trade.” Both provide higher prices for farmers.

Fair trade, Blanchard explained, involves certification from an outside agency that a farm is following certain ethical standards and sets a higher price for coffee. But she added, it is also “an expensive process to get certified.” Direct trade, Blanchard said, is a direct relationship model that more coffee companies have been opting into, but requires companies to make sure their partners are safeguarding the dignity of workers.

“They typically pay a higher premium for that coffee,” she said, but they are “a step-up” from how coffee is generally sourced.

“These [fair trade or direct trade] products are ensuring that farmers are getting a better price for their coffee,” she said.

Investing for the Common Good

Guadalupe Roastery’s plan invites Catholics to invest into a new way of economic thinking and engagement that puts at its center the human person and care for creation that God has provided.

“[E]conomic activity needs to consider the fact that ‘every economic decision has a moral consequence’ and thus show increased respect for the environment,” then-Pope Benedict XVI said in his message for the2010 World Day of Peace, saying the costs to protect people and the environment should be included when using natural resources.

“I would advocate the adoption of a model of development based on the centrality of the human person, on the promotion and sharing of the common good, on responsibility, on a realization of our need for a changed lifestyle,” he said, “and on prudence, the virtue which tells us what needs to be done today in view of what might happen tomorrow.”

Guadalupe Roastery’s commitment to make the Catholic Church’s social teaching inform every step of its process drew the support ofBlackstripe Ventures, a venture development firm that aims to grow mission-based enterprises from the inside out. The firm has worked to leverage the raw talent of graduates from Ave Maria University to market Guadalupe Roastery and build a partnership with Patreon to enable people to give directly to some of the charitable endeavors supported by Guadalupe Roastery, such as the literacy program. The Catholic company is also partnering with parishes to promote its product and support the parish’s mission, as parishes can receive a portion of the proceeds from customers that use a parish’s unique referral code.

One of Guadalupe Roastery’s investors, who asked that he not be named, told the Register that while he was drawn by the value proposition of Guadalupe’s flavor profile and strong relationship with the farmers, the key difference was the Catholic faith driving every part of the process.

“Everyone within Guadalupe Roastery has a Catholic ethos,” he said.

Fassbender said he wants Guadalupe Roastery’s coffee to help people put the family’s prosperity back to the center of the economy and be a way for people to share stories and transform hearts with the message of Jesus Christ.

“Coffee is just a way to engage, to hear other people’s stories, to share our story and share the Gospel.”

It Is Not the Fault of Voltaire or...