Hard Lessons from Great Literature in a Time of Pestilence 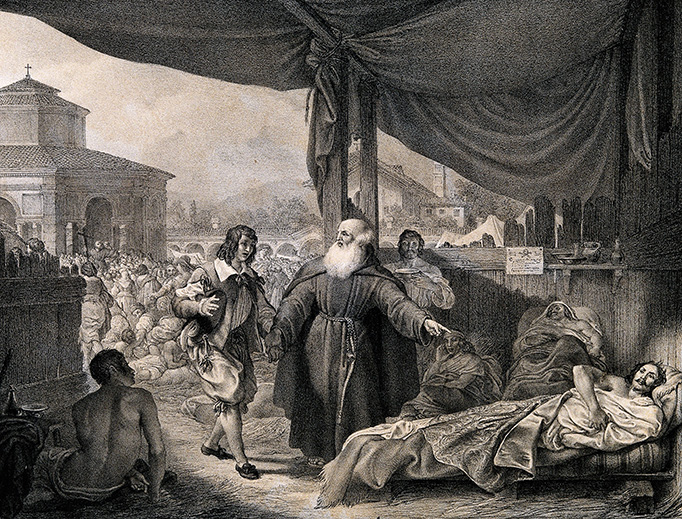 Hard Lessons from Great Literature in a Time of Pestilence

“How else but through a broken heart may Lord Christ enter in?”

We are living in very confused and confusing times. The pestilence is upon us and many of us find ourselves in lockdown, under house arrest, and, if we live alone, in solitary confinement. Worse, at least for Catholics, is the fact that we have been locked out of our churches and exiled from the sacraments. We find ourselves in the desert, without the sustaining oasis that Holy Mass provides. All are mortified by this sad and sorry state of affairs. Many are angry.

In the midst of the confusion, anger and uncertainty, we can find solace in the wisdom of the ages and the wisdom of the sages. We can be inspired by the saints and the way that they coped in perilous times and situations. We can also learn priceless lessons from the great works of Christian civilization, of which Alessandro Manzoni’s classic novel, I Promessi Sposi (The Betrothed), is one of the greatest.

Arguably the greatest novel ever written, The Betrothed is set in the 17th century, in northern Italy, not far from where the present pestilence first struck, at a time when the plague had descended on Milan and its environs. It is, therefore, intriguing to consider parallels between that time and ours.

Manzoni tells us that the emergency government put pressure on the Cardinal Archbishop of Milan, Federigo Borromeo, to hold a procession through the streets with the relics of his cousin and predecessor, Charles Borromeo, who had been the Archbishop of Milan when an earlier plague had struck around half a century earlier. Pressuring “the cardinal archbishop to have a solemn procession bearing the body of San Carlo through the city,” the government at first met with resistance from the prelate of the Church: “The good prelate refused, for many reasons. He did not like this faith in an arbitrary measure, and he feared that if the results did not come up to expectations – as he was also afraid that they might not – faith might turn into scandal.” He also feared, for good reason, that “the crowding together of so many people was bound to spread the contagion even more.”

The government, “not dissuaded by the wise prelate’s refusal, went on pressing him, loudly backed by public opinion.” And so, in spite of his serious misgivings, the Cardinal bowed to political pressure and the baying of the mob and permitted the procession of the saint’s relics through the plague-ridden streets. Manzoni describes the pomp and pageantry of the occasion:

Three days were spent in preparations. At dawn on the 11th June … the procession left the cathedral. In front went a long line of people, chiefly women, their faces covered with wide shawls, many barefoot and dressed in sackcloth. Then came the guilds preceded by their banners, and the confraternities in habits of various shapes and colours, then the monks and friars, then the secular clergy, each wearing the insignia of their rank, and carrying a taper or torch in their hands. In the middle, where the lights clustered thickest and singing rose loudest, beneath a rich canopy, came the casket, borne by four priests sumptuously robed, who changed relays every now and again. Through the glass could be seen the venerable form, dressed in splendid pontifical robes, and the mitred skull. In the mutilated, decayed features could still be seen some trace of his former appearance as shown in the pictures of him, and as some could remember seeing and honouring in life. Behind the mortal remains of the dead shepherd … and near him, as he was in merit, blood and dignity, came Archbishop Federigo. Then followed the rest of the clergy; then the magistrates in their full robes of state; then the nobles, some dressed magnificently, as for a solemn religious ceremony, and some in mourning, as a sign of penitence, or barefoot and in sackcloth with their faces hooded; all bore tapers. The rear was brought up by a mixed crowd.

This solemn pageant processed through streets “decked as for a festival.” Pictures, inscriptions and coats-of-arms were draped from the fronts of houses on either side. “The sick in quarantine looked down at the processions from many of these windows, and followed it with their prayers.” Others, including nuns, climbed on to roofs for a better view, hoping to catch a glimpse from afar of the casket containing the relics of the saint.

The Lord responded to these prayers that the plague should pass from the people of Milan as he had responded to the prayer of Jesus during his agony in the Garden, that, if it be the will of the Father, the cup might pass from him. And yet, crucially, Jesus had added that “not my will, but thine be done.” It was clearly the will of the Lord to permit the suffering of the plague, no doubt mindful of the mystical power of suffering to bring people to their knees in repentance. The sign that the government and the people had demanded would not be given:

And then next day, while the presumptuous confidence and indeed in many the fanatical certainty that the procession had ended the plague was at its height, the death-rate suddenly increased to such an extent in every class and every part of the city, with such a sudden leap, that no one could fail to see the cause or the occasion of it in the procession itself.

This is a harsh lesson from a God who so loves the world that he did not spare his only Son. It is a lesson that Christ, the innocent victim, teaches us from the Cross. It shows us that it might be better for our immortal souls if we are wrenched from our comfort zones into the presence of suffering. It shows us, in the words of Oscar Wilde, that “God’s eternal Laws are kind and break the heart of stone” because, as Wilde asks, “how else but through a broken heart may Lord Christ enter in?” And delving even deeper into the mysterious depths of suffering, Gerard Manley Hopkins prays that God might “wring” man’s rebellious malice “with wrecking and storm.” “Thou art lightning and love,” Hopkins prays to the Father who loves the hearts he has wrung, knowing that God is at his most merciful in his “dark descending.”