Heaven and Earth Meet: ‘Fatima’ Brings the Miraculous to the Big Screen 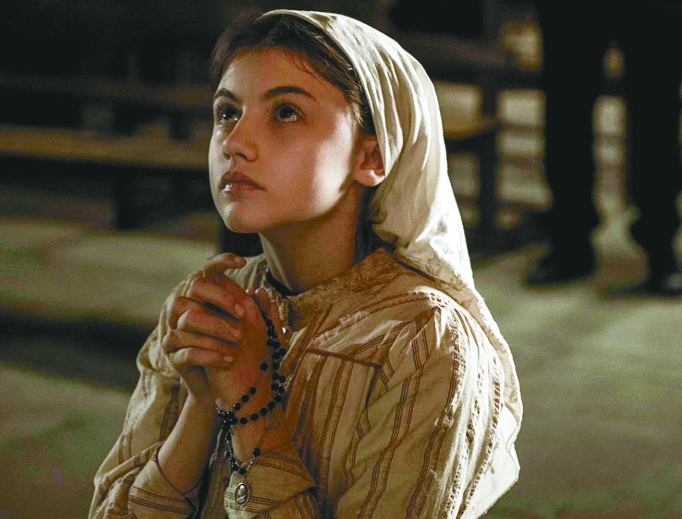 Heaven and Earth Meet: ‘Fatima’ Brings the Miraculous to the Big Screen

New film highlights the enduring message of Our Lady.

Fatimais a beautiful, moving film. Who can resist a story about a Mother come from heaven to help a straying world and tell her prodigal children exactly how and why they need to get back to their Father to bring peace?

While the Blessed Mother’s appearance at Fatima and the “Miracle of the Sun” happened 103 years ago and since then has become known to tens of millions of people, the film’s appeal stretches across boundaries. Fatima devotees, nominal Catholics, non-Catholics and those who aren’t religiously oriented will find something to consider in this film.

Fatimais not a remake of the 1952 filmThe Miracle of Our Lady of Fatima.

ThisFatimaelicits an unmistakable realism, putting viewers into the fields of Portugal and a village where the clock has “stopped” — bringing to life the hamlet of Aljustrel and the Cova da Iria, where Servant of God Lucia and the Santos family, and Sts. Jacinto and Francisco and the Marto family, lived in 1917.

What happened in Fatima more than a century ago is presented in flashbacks recalled by an elderly Sister Lucia, now a Carmelite nun, in the movie. The character of Professor Nichols, played by Harvey Keitel, is a well-known nonbeliever in supernatural events who visits the Fatima seer at her monastery in Coimbra. Nichols is writing a book on such phenomena and wants to hear firsthand what she experienced because, as he admits, there are events surrounding Fatima that are unexplainable.

Both respect each other, though their reactions to apparitions differ: Nichols admits something happened at Fatima while Lucia knows it did. The convent grill that separates them physically also symbolically separates their different ideas. The older Lucia embodies a great serenity and patience in every scene with Nichols, thanks to her portrayal by Sonia Braga, who delicately depicts the oldest Fatima seer as one whose life is immersed in faith and, in this case, great patience. Lucia is intellectually on par with the academic and gives him much to think about. “What is faith if not the search for truth?” she tells him in one of their exchanges.

Although a skeptic, Nichols is sincere in listening and questioning during his open exchanges with Lucia. Keitel brings out both scholarly and gentlemanly qualities in Nichols. His questions form the springboard for the greater part of the film — the events in Fatima during those six months in 1917 from May 13 to Oct. 13 and the introduction to those visions by the Angel of Peace the year before.

There is no historical Professor Nichols connected with Lucia; this character is the foil to have her recall the events that begin with the first flashback, when the Angel of Peace appears to Lucia inside a large cave. She’s given a glimpse of what’s happening as World War I rages across Europe and sees her own soldier brother Manuel running from explosions. At the same time, in Portugal, including in her own village, the Freemasons are in control, infecting the towns with atheistic socialist/communist ideas. The war is brought home, as, daily in the town square, the mayor reads aloud the list of local dead and missing.

Amid all this, as Lucia, Jacinta and Francisco tend their sheep, Our Lady appears to them.

She doesn’t stand atop the holm oak tree, as she did in 1917, but walks into the scene by the tree. While this representation doesn’t follow exactly the written descriptions of Lucia and the children concerning the visions, this is an instance of interpretation by the filmmakers. (The Shrine of Our Lady of the Rosary of Fatima has said the director “conveys with dignity and integrity the actions of those who experienced the Fatima event.”) At the same time, this cinematic “translation” tries to remain true to the major elements and message of Fatima.

Our Lady is depicted with delicacy and simplicity by Portuguese actressJoana Ribeiro, who portrays Mary with beautiful motherly love, kindness and concern.

The portrayal of the Fatima seers is likewise spot-on. The trio have such a natural companionship. Stephanie Gil brings to the character of Lucia the intense inner struggle that occurs when not even her own mother believes her. She wants to obey her mother, yet she does not want to disobey the Blessed Mother and her requests. These struggles hint of the suffering Lucia would have to endure for many years following the visions.

Gil continues the theme of inner suffering as Lucia is badgered by the mayor and endures questioning from the bishop. In the midst of this turmoil, parish priest Father Ferreira (Joaquim de Almeida) goes slowly from polite skeptic to cautious believer.

Eight-year-old Alejandra Howard brings little Jacinta to life, too. After the first apparitions, Jacinta becomes a little more reserved and determined. Francisco is always the quietest of the trio, shy and reserved, and young Jorge Lamelas fits the part well. There’s a scene where he looks at our Blessed Mother but can’t hear her words, which is true to the history of the apparitions.

In this scene, viewers stand in Francisco’s shoes, seeing but not hearing Our Lady speaking, let in on his quizzical frustration.

With much of the script based on Lucia’s own writings and remembrances, the mother-daughter conflict and tension between Maria Rosa and her daughter is palpable on screen.

Rosa is highly religious but does not believe the Mother of God would choose to appear to her daughter; she thinks Lucia is lying. Actress Lucia Moniz brings out not only Rosa’s consternation, frustration and unsureness amid familial conflict, but she and Gil highlight deep mother-daughter love despite the conflict, and that comes through onscreen, even through such means as a simple look.

On the other hand, Lucia’s father, Antonio, wants to believe his daughter and most often gives her the benefit of the doubt.

During one poignant moment, he tells Lucia, “At times our special gifts might lead to trouble. Others might not understand.”

He’s a model of a good man, father and husband in a loving relationship with his wife.

On the other hand, tension marks the marriage of Artur de Oliveira Santos, the mayor of the county in which Fatima belonged, and his wife, who is a believer.

The real Santos was most feared; known as a tyrant, he was an atheistic Freemason who wanted to squash what was happening with the apparitions in any way he could, including bringing the children to jail and threatening each individually with execution if they didn’t reveal what the Lady told them. Goran Višnjic believably rounds out the angry, manipulative mayor with nuances to soften his character so he’s a villain without being a caricature. While he does jail the children — we see only Lucia in the empty cell, another departure from the actual events — the script skips over the death threats. Including that would have added to the drama. Still, in a way, it works with poetic license. Likewise the script took liberties when the mayor blames Lucia if her brother Manuel does not come home from the war in his efforts to get her to recant (Manual was not in the army). Nor was the village church boarded shut after any apparition; neither were the villagers from around Ourém praying the Rosary outside the jail for the children’s release, as included in the film. Yet most of the story is the taken from the actual history.

Fatimadoes not shy away from speaking about the Rosary. During the October apparition, the Blessed Mother identifies herself as “Our Lady of the Rosary.”

From the start, she tells the children of the need to pray the Rosary, to suffer for the conversion of sinners, to pray for peace to end the war — and warns, “If we do not stop insulting God, there will be a war worse than this one.”

Nor does the film shy away from the children’s vision of hell — “This is what will happen if sinners do not convert,” Our Lady tells them — or visualizing the Third Secret, with the pope blessing the dead among ruins and then, accompanied by other bishops and priests, walking up to a crucifix on the hill.

Lucia in the movie prays as she makes a sacrifice, “O Jesus, it is for love of thee, for the conversion of sinners, and in reparation of the sins committed against the Immaculate Heart of Mary.”

In each case, director (and co-writer) Marco Pontecorvo handles the scenes with great care and without sensationalism.

Originally a cinematographer, he uses atmospheric lighting to lend authenticity to the story. For instance, scenes in Lucia’s house are filmed in candlelight. More authenticity comes from the film locations themselves in Portugal, from Coimbra to a medieval town that is a stand-in for Ourém and Lucia’s village of Aljustrel.

Thankfully, Pontecorvo shuns razzle-dazzle for October’s “Miracle of the Sun,” offering a miracle with all the right touches, from the sun’s movement to the changes of colors on the peoples’ faces reflecting the sun as it dances in the sky. If only he added the wondrous visual follow-up: the people’s rain-soaked clothes becoming fully dry.

Italian composer Paolo Buonvino’s score beautifully augments the story in unobtrusive ways. Who better to sing his soaring Gratia Plena, the end-credit song, than practicing Catholic Andrea Bocelli, who’s on the record saying, “This is an edifying story for everyone, even people who do not possess the gift of faith.”

Fatima, given limitations of running time, can’t treat every word of each apparition in detail. But it does justice to the main messages of Fatima in a beautiful presentation.

It’s the exceptional, necessary film for these troubled times.