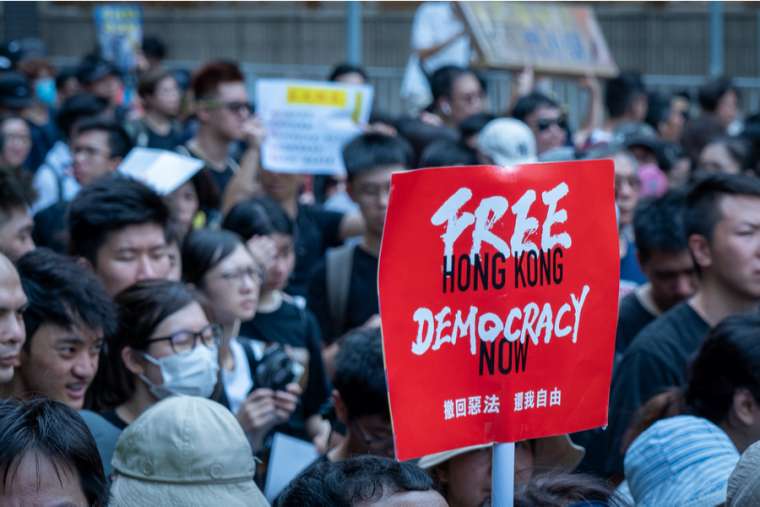 Prominent democracy activists were arrested and charged for violating Hong Kong’s new national security law Monday, including Agnes Chow, a 23-year-old Catholic democracy activist. Chow has been outspoken in her support for civil rights in the former British colony.

Chow is a former candidate for elected office in Hong Kong but was barred from appearing on the ballot because of her advocacy for self-determination for Hong Kong. She is also the founder and a former leader of Demosisto, a pro-democracy political party which was disbanded shortly before the new law came into effect.

On July 1, the National Security Law went into effect in Hong Kong, having been imposed on the territory by the mainland government, bypassing the Hong Kong legislature.

Under the new law, a person who is convicted of secession, subversion, terrorism or collusion with foreign forces will receive a minimum of 10 years in prison, with the possibility of a life sentence. The law’sbroad definitionof terrorism includes arson and vandalizing public transportation “with an intent to intimidate the Hong Kong government or Chinese government for political purposes,” while secession charges can be brought for displaying or announcing slogans such as “Free Hong Kong.”

The law has been harshly criticized by the leaders of several Western countries, as well as some Catholic leaders, as the end of the “one country, two systems” policy agreed at the time of Hong Kong’s handover from Great Britain.

Chow’s arrest was first reported Monday by Nathan Law, a former leader of Demosisto with Chow. Hong Kong Standard later reported she had been detained for “inciting secession.” Chow was already facing charges related to her participation in anti-government protests last year.

Also arrested on the same day was Jimmy Lai, publisher of Apple Daily, a Chinese-language newspaper in Hong Kong known for its overt criticism of Hong Kong and mainland government action. Lai has reportedly been charged with “foreign collusion” under the new law.

On August 7, Treasury Secretary Steven Mnuchin announced sanctions against Lam for her role in bringing the new national security law into effect in Hong Kong and “undermining [Hong Kongers’] autonomy.”

“In response to that wrong U.S. behavior, China has decided to impose sanctions on individuals who have behaved egregiously on Hong Kong-related issues,” said Zhao Lijian, China’s foreign ministry spokesman during a briefing on Monday announcing the sanctions.

While the Chinese government acted against several legislators, no action was announced against officials of the Trump administration, despite the Treasury Secretary’s Aug. 7 announcement.

Additional Chinese sanctions were announced against several NGOs, including the leaders of the National Endowment for Democracy; the National Democratic Institute for International Affairs; the International Republican Institute; Freedom House; and Human Rights Watch.

Details of the sanctions’ provision were not announced.

Rubio, Cruz, and Smith were also the subject of earlier sanctions and bans on traveling to China issued in July. Those sanctions were related to their statements against China’s persecution of the Uyghur population.