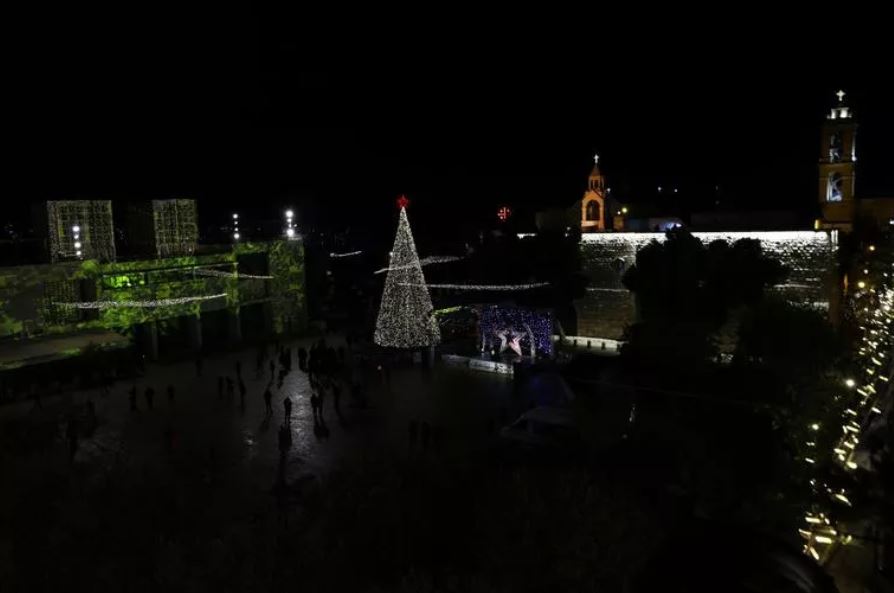 Due to COVID-19 and decreased tourism, the solemnity will be subdued this year in Jesus’ birthplace.
Michele Chabin, December 10, 2020

JERUSALEM — For the Christians who live in the Bethlehem area, Christmas promises to be unusually modest and quiet this year, due to the continuing COVID-19 pandemic.

Pilgrims, as well as most of the pageantry and fanfare that makes Christmastime in Jesus’ birthplace so memorable, will be absent this year, as Palestinian and Israeli officials continue to struggle to contain the virus.

Large crowds were banned from the annual Christmas tree lighting in Manger Square earlier this month, and the festive procession celebrating the entry of the Latin patriarch to Bethlehem will be scaled down. So will the number of people permitted to attend Christmas Mass at the Church of the Nativity, the site of Jesus’ birth.

“Christmas this year will be very difficult for the local people,” said Franciscan Father Ibrahim Faltas, director of Terra Sancta Schools in the Holy Land. “Many people, including most Christians, work in the tourism sector, and we have had no pilgrims since March. The people are suffering because there is no work. It’s an unprecedented situation.”

Yet as challenging as their situation is, Holy Land Christians — whose renowned resilience has helped them survive wars, uprisings, occupation and emigration — are turning to their faith more than ever this fraught Christmas season.

“Christmas will be different this year, but it’s also giving us the opportunity to reaffirm that Christmas isn’t just a celebration, lights and gifts. This year we appreciate even more that the main gift of Christmas is Jesus,” said Opus Dei Father Joaquin Banillo, vicar secretary of the personal prelature in Jerusalem. Franciscan Father Rami Asakrieh of St. Catherine parish in Bethlehem said that from a purely financial perspective, COVID-19 has been even more devastating to his flock than the intifada years, when many pilgrims stayed home out of safety concerns and local unemployment and emigration skyrocketed.

“While Christians in the Holy Land are accustomed to suffering,” Father Asakrieh said, in the past they received financial assistance from Christians and donor countries around the world, who actively supported the strong but dwindling Christian community, which now comprises less than 2% of the population in both the Palestinian Authority and Israel.

“Now, those Christians who live abroad are also in a bad situation and suffering themselves, and it has resulted in far fewer donations, Father Asakrieh noted.

If the COVID crisis and the resulting lack of tourism and outside donations continues much longer, “we will have a really terrible situation,” the priest said.

Almost 7,000 people who rely on tourism for their livelihoods are unemployed due to the pandemic, according to the Bethlehem municipality. About 12,000 of the city’s 55,000 residents are Christians, 5,500 of them Catholic.

The Palestinian Authority was one of the first governments to impose a complete closure on Bethlehem and much of the rest of the West Bank, after a group of Greek tourists unwittingly infected local residents during a visit to Bethlehem. The authority’s quick decision — made in coordination with Israel and nearby Jordan — no doubt saved lives, but it also caused widespread unemployment in a city where residents earn their living as tour bus drivers, tour guides, restaurant and hotel employees, olive wood artisans (who carve Nativity scenes) and souvenir shop owners, among others.

Since the start of the COVID closures, Father Asakrieh said, Christians in Bethlehem, Jerusalem and elsewhere in the Holy Land have been living on savings, if they had any. Even Bethlehem residents who have hard-to-obtain permits to work in Israel have no opportunity to do so, because Israel has closed its borders to prevent the virus from spreading.

To prevent disaster, “we are trying our best as a Church to support the people,” Father Asakrieh said.

Before COVID, the local Church helped needy families to defray the costs of medical services and university tuition, for example.

In May, in order to mitigate the growing financial crisis, the Latin patriarch of Jerusalem, Archbishop Pierbattista Pizzaballa, launched an international “COVID Appeal” to support nearly 12,500 needy families enrolled at the 38 Latin Patriarchate Schools in Jordan and Palestine to help them meet their financial obligations.

“Given the severity of the pandemic and its devastating effects around the world, the lack of strong health and economic structures in both Palestine and Jordan, characterized by massive loss of jobs and income, most families turned to use available resources to meet basic needs,” said the appeal, signed by Archbishop Pizzaballa, the new Latin patriarch (at the time of the appeal he was apostolic administrator). “Given the global nature of the pandemic and realizing that the suffering is in every corner of the world, any amount, regardless of its size, will be greatly appreciated,” the appeal continued.

Despite the suffering — and in many cases due to the suffering — Christians in the Holy Land feel closer to Christ this Christmas, said Franciscan Sister Naomi Zimmermann from the Franciscan Sisters of the Eucharist. “Our prayer life has intensified. We pray more,” Sister Naomi said, referring to herself and the two other sisters of her order who are stationed in the Holy Land.

While she misses the festivities of a normal Christmas season and assisting busloads of pilgrims through her work at the Christian Information Center in Jerusalem, Sister Naomi expressed gratitude for the quieter, gentler pace the pandemic has brought. “I think what COVID has given us, and the whole world, is silence. Things are quieter. I think people are staying home, and that’s important. When you’re in silence, you can get more in touch with your own inner longings and desires and prayer. I think when people can’t get to Mass, they have that desire. … I hope that brings them more of a longing for the Eucharist and adoration.”

Sister Naomi called the celebration of Christ’s birth a time to “stop, adore, to be peaceful, silent and joyful. How many have a chance to come to that moment?”

Father Banillo believes the pandemic has prompted Christians to explore and deepen their faith.

“Many people have asked me whether the virus is a punishment from God. I think people realize it is a part of life. Everything comes from God, of course, but it’s not necessarily a punishment. Rather, it’s a way of making us think about heaven.”

During the many times it was forbidden for Christians to attend Mass, local Christians yearned for Mass, for the Eucharist and to pray together. Father Banillo said, “The more we have the desire for the Eucharist, the more we appreciate it. And when we don’t have to worry about material things, we think more about God.”

Said Sister Naomi, “Perhaps it’s a chance to celebrate more peacefully the coming of Christ to us.”

Cardinal Pell, Advent and the Gosp...