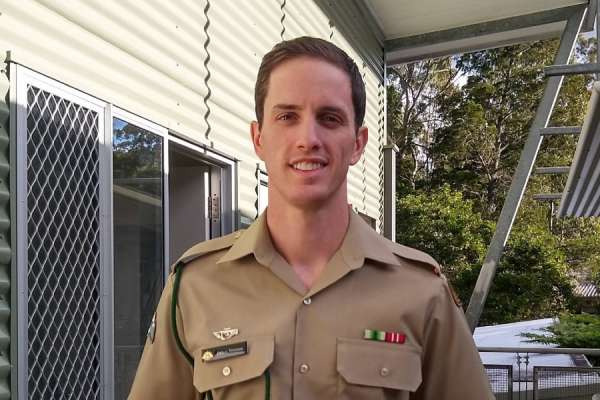 Rome Newsroom, Jan 21, 2021 / 12:00 pm (CNA).- As a self-proclaimed atheist in his early 20s, Private Dillon Beatson said that the only time he spoke of religion was with ridicule. But when his helicopter crashed during a training mission in the Middle East, he found himself crying out to God.

“It is funny how fast and slow it went at the same time,” Beatson said in an interview with Colm Flynn of EWTN News.

“I was holding on to something and we crashed down on the left, and I got launched into the sand. The helicopter was still moving forward. It was pushing me into the sand. The propeller blades were spinning around. It was incredibly loud and I thought: ‘This is it.’ … It was when I called out to God and said: ‘God, please don’t let me die.’”

Beatson, who at the time served as a radio operator in the Australian army, said that he was surprised at his spontaneous impulse to pray.

“At the time it confused me … because I didn’t believe in God. I thought he was a fairytale. It really started me on a soul-searching journey,” he said.

A fellow soldier died in the crash. Beatson, who was unharmed, said that that moment led him to a years-long search for the meaning of life.

“I was baptized Catholic and I went to a Catholic primary school for the first couple of years of schooling, but I wouldn’t say that I was very religious at all. I had very little knowledge about who God was, who Jesus was,” he said.

By the time that he had graduated from high school in Australia, he, like many of the millennial generation, was a “religious none,” or a person who declares that they do not belong to any religious denomination.

He said that he spent many weekends “getting ridiculously drunk” at parties and that the only time that he spoke of religion was when he was making fun of people’s faith or “bashing religious institutions.”

Beatson attributed his decision to return to Mass to his close encounter with death. He enrolled in the Rite of Christian Initiation of Adults (RCIA) program and was confirmed in the Catholic Church in August 2019.

“I just went into the Latin Mass — I didn’t even know there was such a thing as Latin Mass — and I just fell in love,” Beatson told The Catholic Leader newspaper in Australia.

“I sort of feel like my childhood was robbed in a way, that I didn’t get to grow up with the love of Christ, and didn’t get to have a lot of the teachings and morals instilled in me from a young age.”

Now that Beatson is a practicing Catholic, he said that he considers the faith to be “a treasure” that he wants to share with others.

“My life is different now because I am not just living for myself anymore. I am trying to — obviously failing a lot — but I am trying to live my life for Christ. I am trying to come to know him and to love him more … to allow his love and his light shine through me. And I just feel so at peace,” he told EWTN.

“In today’s culture — especially young men — we are fed a lot of lies about what young men should be. And really the best example for a man is our Lord Jesus. It is just such an incredible feeling and an incredible love. His love and his grace really changed my life and it can change your life too.”