How a Nurse Saved St. John Paul II’s Blood-Stained Shirt After He Was Shot – Now It’s a Relic 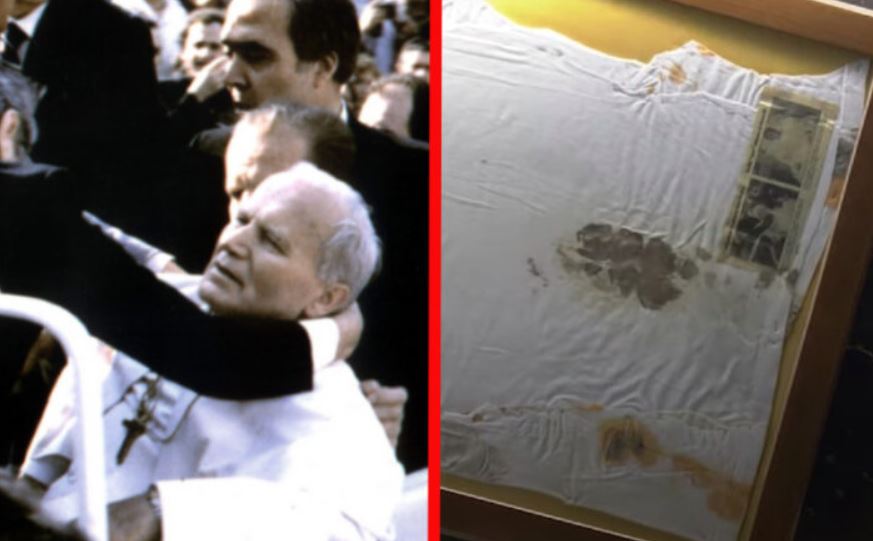 How a Nurse Saved St. John Paul II’s Blood-Stained Shirt After He Was Shot – Now It’s a Relic

Are you aware of Saint John Paul II’s shirt relic?

The Daughters of Charity of Saint Vincent de Paul keep this relic Rome. The shirt contains blood stains from his assassination attempt on May 13, 1981.

People without resources, single mothers, and immigrants come to this institution for help. However, the house became a pilgrimage center since preserving Saint John Paul II’s garment there.

Here’s the photo of the t-shirt below:

Here’s the story from Rome Reports:

“You can still see the pope’s blood stains on the relic and you can make out three distinct holes,” Sister Maria Rosario of the Daughters of Charity of St. Vincent de Paul told Rome Reports.

“They are holes caused by bullets. Not because there were three bullets, but since the shirt was folded over itself, because of how he was standing.”

Sister Maria also explained how the relic came to them–through nurse Anna Stanghellini, who preserved the t-shirt in her closet for many years.

“In the operating room, they cut his shirt into two pieces and threw it on the floor because they had to operate on the Pope,” Sister Maria explained. “When they finished, she realized that the shirt was still there and would probably end up in the garbage. So she decided to pick it up.”

Stanghellini felt close to the Daughters of Charity, so she chose to donate the shirt to their community. The relic’s display attracts many visitors for veneration. The sisters say many share stories of St. John Paul II’s miraculous intercession.

Miracle after venerating the relic

“A woman told me that she wanted to have a child, but she couldn’t have one. And she came here to pray almost every day. Finally, she became pregnant, but the doctors told her that she and her child were in great danger.

“She and her husband asked St. John Paul II for a miracle. In the end the child was born and is in good health. So is she. They named him John Paul.”