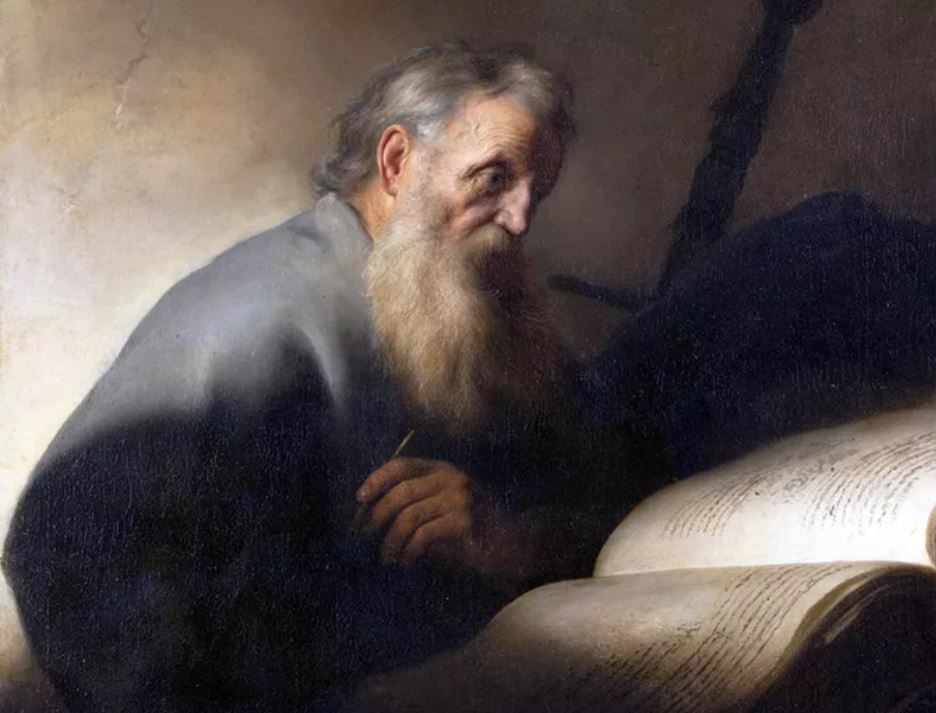 “For Holy Mother Church, relying on the faith of the apostolic age, accepts as sacred and canonical the books of the Old and the New Testaments, whole and entire, with all their parts, on the grounds that, written under the inspiration of the Holy Spirit, they have God as their author, and have been handed on as such to the Church herself.”70

106 – God inspired the human authors of the sacred books. “To compose the sacred books, God chose certain men who, all the while he employed them in this task, made full use of their own faculties and powers so that, though he acted in them and by them, it was as true authors that they consigned to writing whatever he wanted written, and no more.”71

The books of the Old Testament were written probably between 1000 and 100 BC and are usually distinguished as three sets: The Law (or Torah, our first five books of the Old Testament), The Prophets and The Writings. Even in the New Testament itself, we find references to the reading of the Law and the Prophets in synagogue services (e.g. LK 4:16-19), Jamnia (90-100), at which time they established what books would be considered their Sacred Scripture. At this time, some controversy still existed over what are called the seven “deuterocanonical books”—Tobit, Judith, Wisdom, Sirach, Baruch, I and II Maccabees, and Esther—although they had been incorporated in their entirety or at least partially in versions of the Septuagint, the official Greek translation of the Old Testament (c. 100 BC). Part of the reason for the controversy was because these were the latest writings of the Old Testament and were written in Greek rather than Hebrew; the other books of the Old Testament—the “protocanonical books”—were older and originally written in Hebrew. Modern scholars note that Jamnia did not exclude any books definitively; a rigid fixing of the Jewish canon does not occur until at least 100 years later, and even then, other books—including the deuterocanonical books—were read and honored. Many Scripture scholars, however, have no doubt that the apostolic Church accepted the deuterocanonical books as part of its canon of Sacred Scriptures. For instance, Origen (d. 245) affirmed the use of these books among Christians even though some of the Jewish leaders did not officially accept them.

Meanwhile, the writing of the New Testament books occurred between the time of our Lord’s death and the end of the first century. (Recent studies of the Dead Sea Scrolls by some scholars suggest a date of the earliest writings closer to the time of our Lord’s death, whereas much scholarship seems to place the writings between 50 and 100 AD). After the legalization of Christianity in 312, we find the Church striving to formalize what writings of the New Testament were truly considered inspired and authentic to the teachings of our Lord. St. Athanasius in his Paschal Epistle (367) presented the complete list of 27 books of the New Testament saying, “These are the sources of salvation, for the thirsty may drink deeply of the words to be found here. In these alone is the doctrine of piety recorded. Let no one add to them or take anything away from them.” This list of 27 books along with the 46 books of the Old Testament (including) the deuterocanonical ones) was affirmed as the official canon of Sacred Scripture for the Catholic Church by the synods of Hippo (393), Carthage I and II (397 and 419). The letter of Pope St. Innocent I in 405 also officially listed these books. Although some discussion arose over the inclusion of other books into the Church’s canon of Sacred Scripture after this time, the council of Florence (1442) definitively established the official list of 46 books of the Old Testament and 27 of the New Testament.

Analysis: How a papal handshake be...