How St. John Paul II ‘bent the course of history’ 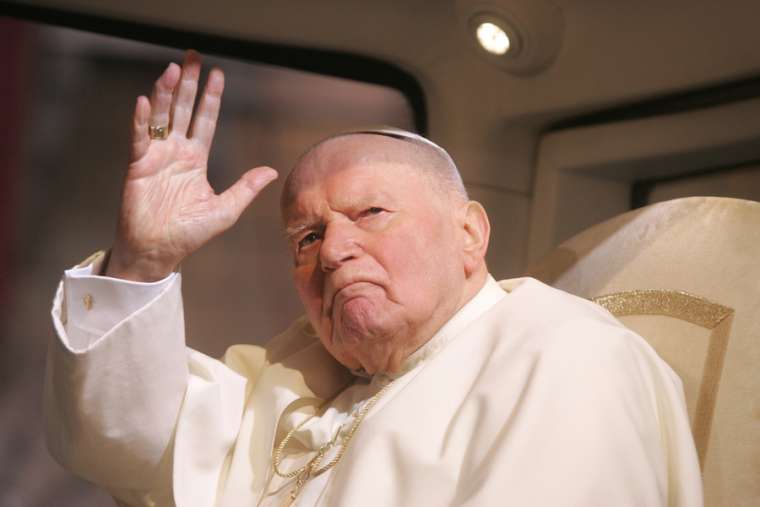 How St. John Paul II ‘bent the course of history’

The life of Pope Saint John Paul II is proof that religious belief and moral conviction can change the course of history, the pope’s biographer said on Monday, May 18.

During his 26-and-a-half-year papacy, the third longest in history and the longest in the modern era, John Paul II was “the great Christian witness of our time, the man who made Jesus Christ come alive for so many,” said Weigel. “His own discipleship invited others to be Christian disciples.”

Weigel’s presentation during the webinar was one of many events hosted by the shrine to mark the centenary of John Paul II’s birth. Originally, these events were going to be held in-person, and include an “academic-style symposium” but plans were changed due to the outbreak of COVID-19.

John Paul II was a “pope of the Catechism and the pope of the Divine Mercy devotion,” said Weigel. He explained how “those two realities–truth and mercy–had met in his own life,” and inspired him to bring them out to the life of the Church.

In October, 1992, Pope John Paul II promulgated the new edition of the Catechism of the Catholic Church; and in 2000, he designated the Sunday after Easter as “Divine Mercy Sunday.”

As pope, said Weigel, John Paul II demonstrated “the power of religious and moral conviction to bend history in a more humane direction” better than secular disciplines like economics or law. He pointed to the pope’s first visit back to his native Poland, then a communist state, which sparked a revolution that resulted in the fall of the Iron Curtain.

Weigel further touched on John Paul II’s promotion of the Divine Mercy devotion, and noted that this legacy is felt even years after his death, with Pope Francis adding an optional memorial to St. Faustina to the Roman Calendar.

Weigel stated that the effects of WWI and WWII had “shredded the moral fabric of the western world,” resulting in “all sorts of personal sorrow, and indeed personal damage, in its wake,” but that the Divine Mercy apparition was intended to heal these wounds.

“Here comes this message of divine mercy radiating from the heart of the risen Lord, to an obscure Polish sister,” said Weigel. “And [John Paul II] interpreted that as being the answer to that shredding of the moral fabric of humanity.”

“Humanity needed to hear the message of God’s mercy, which is strong enough to heal the wounds we inflicted upon ourselves,” he said.

The Saint John Paul II National Shrine is located in Washington, D.C., near the Catholic University of America campus. Originally called the John Paul II Cultural Center, the national shrine was established in its present form in 2011, after it was purchased by the Knights of Columbus. The United States Conference of Catholic Bishops designated the building as a “national shrine” to the then-Blessed John Paul II on March 14, 2014.

The shrine hosts an exhibit about the life and papacy of the saint, and one of its chapels contains a first-class relic that is available for veneration.