How St. Maximilian and Mother Angelica Came to Work in Catholic Media 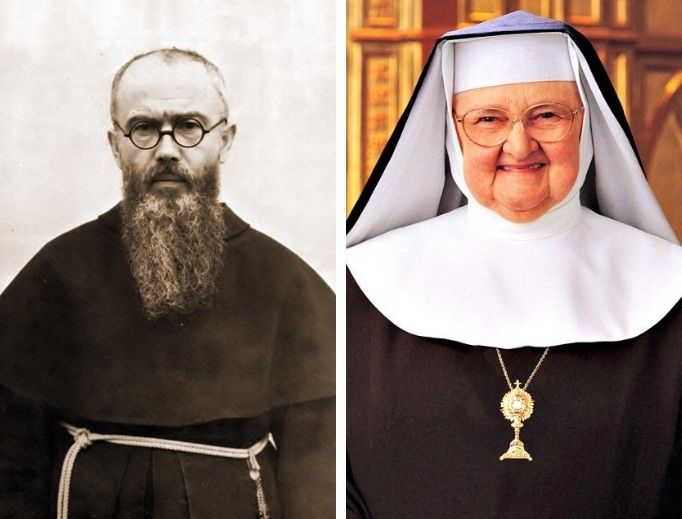 How St. Maximilian and Mother Angelica Came to Work in Catholic Media

The shared philosophy of Mother Angelica and St. Maximilian Kolbe was: Trust God and act!

The lives of St. Maximilian Kolbe and Mother Angelica, foundress of EWTN, have many similarities: They were shaped by their upbringing and social backgrounds, as well as religious formation and the preparation by God to undertake the mission he had indicated to them;God’s guidance and obedience to God’s providence; and their works, Niepokalanów and EWTN, respectively.

Rita Rizzo, later Mother Mary Angelica of the Annunciation, was born in 1923 in Canton, Ohio. Canton was a small industrial town, where steel prevailed and immigrants could count on work in one of the numerous factories. The development of the city was accompanied by a rise in crime; the slums located in the south part of town were infamous for their corruption and violence. Smoky chimneys, a multiethnic society and a chronic lack of money, which affected almost everyone, created a unique atmosphere in the 1920s in which Rizzo was born.

A few thousand kilometers east of Canton, Zdu?ska Wola, Poland, could easily have been an American city in the early 20th century. It also had its industrial “king” —the textile industry. The inhabitants of both cities were similar —immigrants from different parts of the world whose fates were connected by hope for a better life. At the turn of the 20th century, the development of the Polish city accelerated. Small businesses and workshops were replaced with expanded factories, and, in search of work, poor peasants and workers started to come to Zdu?ska Wola en masse. It was in Zdu?ska Wola, surrounded by huge factories and modest weaving workshops, that Rajmund (Raymond) Kolbe was born in 1894.

Little Rita did not have an easy start. Her mother, Mae Gianfrancesco, who came to Ohio from Italy, fell in love with a slightly older and, at first sight, serious man, John Rizzo. Eventually, the couple got married; the news of a child became for him an opportunity to physically assault his pregnant wife. Those beatings, insults, betrayals and a lack of interest in supporting the family eventually became the reason for their divorce, which took place a few years later. Constant stress, lack of independence and even the inability to enforce her modest alimony led her to a deep mental crisis, depression and suicidal thoughts. In such a situation, the daughter could not count on the mother. For 7-year-old Rita, who was called the daughter of divorcees, her first years of her life were not kind to her. But the trials led her to the miraculous.

Raymond’s parents’ marriage combined the energy of an immigrant family, from which Rajmund’s father, Juliusz, came, and the diligence, familism and courage to set higher and higher goals that characterized Marianne, his mother. Both parents worked as weavers. Initially, they ran their own small workshop, but in hard times, they had to sell it and sought a better life, changing their place of residence and work many times. The family of Juliusz and Marianne was characterized by piety, especially devotion to the Mother of God, which influenced the formation of the personality of the children and was an important feature of the family. Rajmund grew up in a workers’ climate. He understood their language and their lives.

As Rita grew up, she suffered a lot with physical ailments. She did not enjoy her high school graduation or her work in advertising, in which she was highly praised. Her stomachaches were getting worse; and, with time, another worry occurred: A huge tumor became visible under the discolored skin of her abdomen. But God cured Rita. He chose Rhoda Wise, local Catholic stigmatist and mystic, as a tool of Providence. This was a real milestone in her life, because behind the physical healing came soon also a spiritual conversion. “I knew that God is,” she said during one of her conversations with EWTN journalist and biographer Raymond Arroyo. “ I knew that God knows me and loves me and is interested in me. All I wanted after my healing was to give myself to Jesus.” At 21 years old, she realized her vocation.

“Rita will do great things for the Church” — one of Wise’s predictions proved sound. Eventually, Rita joined the Monastery of Perpetual Adoration in Cleveland. That day, Angelica was born.

“Can I have afaenum graecum?” shouted small Rajmund, running into a nearby pharmacy. The boy was sent there by his mother, who needed medication to care for the sick. “How do you know Latin?” asked the pharmacist, who helped the boy with his school lessons free of charge. The hardworking and ambitious boy made up for his academic shortcomings in less than a year by passing the exams to the second grade; the next year he started school in one class with his older brother. Then a Franciscan preacher encouraged the Kolbe brothers to study in distant Lviv. The local priest, Father Jakowski, helped with the finances. So 13-year-old Rajmund left home forever. In the following years, Rajmund became a student and then cleric in Franciscan schools. In Rome he was ordained a priest and defended two doctoral theses. With such education and experience, he returned to Poland as Father Maksymilian (Maximilian).

In a few years, Maximilian became head of a Catholic media endeavor, but it was not the most important thing to him. For him, faith in God and a personal relationship with Immaculate Mary were in first place. He wrote that Immaculate Mary was the editor in chief of the journalistic endeavors at the monastery of Niepokalanów. Immaculate Mary was a good editor in chief. Before World War II, Niepokalanów was one of the largest monastery in the world, with 762 friars. It was like a small town, with its own bakery, laundry and fire department. Niepokalanów publishedRycerz Niepokalanej, a Marian monthly journal, putting out about 750,000 copies. Maximilian was also publishing a daily newspaper,Ma?y Dziennik, and planned for radio and television.

Father Maximilian built Niepokalanów where there was once a field, in the countryside, 50 kilometers (31 miles) from Warsaw. People wondered why he didn’t build a printing house in the capital, among people, politicians, government, the center of life? Why such a choice? This field was given to him as a gift. Maximilian went there with a statue of the Immaculate Mary; in this field he celebrated Holy Mass.

Mother Angelica chose to build a monastery in Alabama, where, then, only 2% of the population was Catholic. She chose a hill in a then-unknown Irondale because she followed God’s inspiration — just like Maximilian.

For his part, Maximilian started his publishing activity in Krakow. In January 1922, he was working by himself. He had money to print the first issue ofRycerza Niepokalanej, but he didn’t have the money to print the second issue. So he went to church and complained to the Immaculate: “If this is your work, help me!” While praying, he saw an envelope with the inscription “For the Immaculate Mary.” Inside was exactly as much money as he needed.

When Mother Angelica’s first satellite dishes were coming, she did not have the funds to pay for them. But when she left the chapel, she had $600,000, exactly as much as she needed. Father Maximilian often said that it is better to have nothing, because then Providence can work. Mother Angelica said the same. Their shared philosophy was: Trust God and act!

Such trust enabled the monastery in Niepokalanów to become a very modern media factory. But that dream wasn’t enough for Maximilian. He wanted to print his monthly journal in every language: not only in Polish, English, French, Spanish or German, but also in Arabic, Aramaic, Malaysian, Hebrew and Esperanto. Indeed,Seibo no Kishithe Japanese edition ofRycerz Niepokalanej, was a great success. Its recipients were mostly Protestants and other non-Catholics. But that is not all.Maximilian was thinking for the future. He had a plan to build a network of evangelization centers to develop a great evangelizing campaign all over the world.

Mother Angelica also built EWTN using the latest technology. She was one of the first people to understand the power of cable networks. NowEWTN, in its many branches, is present worldwide via television, radio, internet and the press.