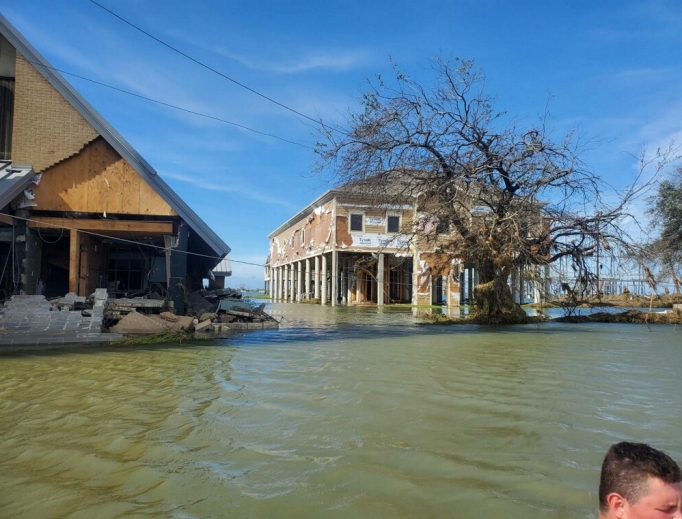 When residents of Lake Charles, Louisiana, heard that Hurricane Laura was barreling its way directly toward them, everyone who could leave packed their bags and fled.

“Originally, it was supposed to be a Category 2 storm. So we packed for week,” said FOCUS missionary Mary Caitlin Spinig. “But by the time we got to Biloxi, it had escalated to a Category 4.”

What was especially frightening for Louisiana coastal residents was the forecast that there would be a storm surge of between 15 to 20 feet, which was deemed “unsurvivable.”

“We had a Bible study Tuesday morning over Zoom with 25 students from McNeese,” said Spinig, “and read the Bible verse from Isaiah 43:2: ‘When you go through deep waters, I will be with you. When you go through rivers of difficulty, you will not drown.’”

“This really helped calm everyone down,” said Spining.

Hurricane Laura roared on shore as a Category 4 storm on Thursday, Aug. 27, at 1am. Wind gusts were recorded in Southwest Louisiana of up to 150 mph. As it moved north, Laura knocked out power to 800,000 homes in Louisiana, Texas, Arkansas and Mississippi. Flood waters topped 13 feet in Cameron Parish, Louisiana, causing widespread damage — but they never reached the 15 to 20 feet flood levels that had been originally forecast. By the time the hurricane reached Lake Charles, the storm surge measured 4.6 feet.

For members of Lake Charles’ Catholic community, the lower floodwaters from what was predicted was an act of God.

“We all went to bed that night thinking that by the next morning nothing would be left of Lake Charles, but the hurricane only stayed over the town for 6 hours — and though there was lot of damage, most buildings were still there in the morning. One of the meteorologists said he saw the storm surge come in Louisiana, swerve east and die down. For me, that was the Lord,” said Spinig.

Hurricane Laura caused severe damage to Lake Charles’ water and electrical system. There is no running water in the city right now. Downed trees and electrical wires have hampered the capacity of utility trucks from entering the city. Skyscrapers have blown out glass windows, and there is debris everywhere. Lake Charles’ St. Louis Catholic High School has been destroyed.

“The damage is catastrophic,” said Father Jeffrey Starkovich, spokesmen for the Diocese of Lake Charles, adding that “100% of our parishes have sustained damage of some kind.”

Father Starkovich evacuated to Baton Rouge several days before Hurricane Laura struck — as did all priests in the region. All pastors had to evacuate with the Blessed Sacrament and sacred vessels of their parish.

“Thanks be to God the flooding was less than expected. Some of our coastal parishes have 3 to 4 feet of water inside their buildings. But in Lake Charles, which is 30 miles inland, the water was not as high,” he said.

“When the storm surge happened, the tide was starting to go down,” said Larry Merington, a businessman from New Orleans. “Because the hurricane moved north at a rate of 17 to 20 mph, which is much faster than the average hurricane, it did not have the ability to push that much water inland.”

Residents are also grateful that where the storm surge did come in, it was to largely unpopulated areas, with forests and farms.

Catholic speaker and author Katie Prejean McGrady evacuated with her husband and 3-year-old daughterto Pineville, Louisiana, several hours away from Lake Charles. As a lifelong resident of Louisiana, she has weathered many hurricanes and evacuations before.

“We went to stay with my grandfather. Right now, we have no power and we probably won’t get it back for several days,” said McGrady. “The storm was a Category 1 when it came here.”

When McGrady’s husband and dad drove back to Lake Charles after the hurricane passed, they found that their house had sustained some damage to the roof with lost shingles, but the house itself was in good condition.

“But the town must be habitable in order for us to return, and that will take about six to eightweeks,” said McGrady. “The water system needs to be fixed, as does the electrical system. Everyone who can is being asked to stay away.”

An issue that her family has had to navigate quickly is the fact that McGradyis 36 weeks pregnant. She was supposed to deliver her baby in Lake Charles.

“There have been several silver linings since the storm. My aunt is a labor-delivery nurse in Alexandria, Louisiana — which is a few minutes away from Pineville — so she will be helping me out. We will end up living here in Pineville with my grandfather through October,” she said.

For many Catholics living through Hurricane Laura, there have been many blessings.

“The storm itself was awful, but after it passed, amazing things began to happen, and I have seen this before in other hurricanes. In an instant everyone is asking each other: How can I help you?” said McGrady.

Because so many people have extensive roof damage, most people are doing what they can to fix roofs themselves or for their neighbors. The most common sight is to see neighbors helping each other, as well as lending each other carpentry supplies and ladders.

“We are doing most of the work because it will take too long to wait for crews to get here, and it has been raining every day,” said Amber Moseley, a member of the FOCUS team. “”My husband, Matt, has been tarping roofs and helping friends clean up all day. We also put a tarp on our roof to cover the holes and save the things we have in our house.”

“Catholic Charities in Lake Charles is supplying people with water and food. They are a pillar for our community,” said McGrady.

The Lake Charles Catholic Charities is run by Sister Miriam MacLean, a Sister of Mercy. During the year, they run a food bank and give rental assistance and utilities assistance. They also drive people to doctors’ appointment. After Hurricane Laura, they have been focused on disaster relief.

Catholics have been encouraged by their parishes to check in on neighbors and family. It is a new normal, given the fact that right before the storm everyone was essentially socially distancing because of Coronavirus. Masses had been operating at 50% capacity.

“We are now encouraging priests to celebrate Mass any way they can. This may mean having Masses outside,” said Father Starkovich.

Many Catholics have noticed how their properties could have sustained worse damage, but inexplicably did not.

“My mom and I have a tradition that when we have to evacuate for hurricanes, we put rosaries on the doorknob of our house for protection. When my husband went back to survey our house, we noticed that the swing set had blown over, trees were blown over, shingles fell off our roof. Lake Charles had been hit with winds of 130mph — but our house was okay, and the rosary was not blown off. The Lord provides,” said McGrady.

FOCUS missionaries also noticed that their houses were protected, despite the fact that a TV tower nearby collapsed and other building roofs were shredded.

“Our house was completely untouched. We have a St. Francis statue which was still standing after the hurricane was over. A huge tree fell in front of my car and just missed my Sacred Heart bumper sticker. It was like there was a forcefield around my house,” said Spining.

In front of the home of Amber and Matt Moseley, who are both FOCUS missionaries, there is a statue of Mary made of plastic filled with sand.

“We have debris everywhere, but the statue of Mary never moved,” said Amber Moseley.

For the people of Lake Charles, the fact that the storm was not worse and that the storm surge was not higher was an answer to the enormous wave of prayer during the days before Hurricane Laura hit land. Like the statue of Mary, their faith was solid and did not crumble when the winds began to howl.