‘I believe I can serve my country,’ Amy Coney Barrett tells senators 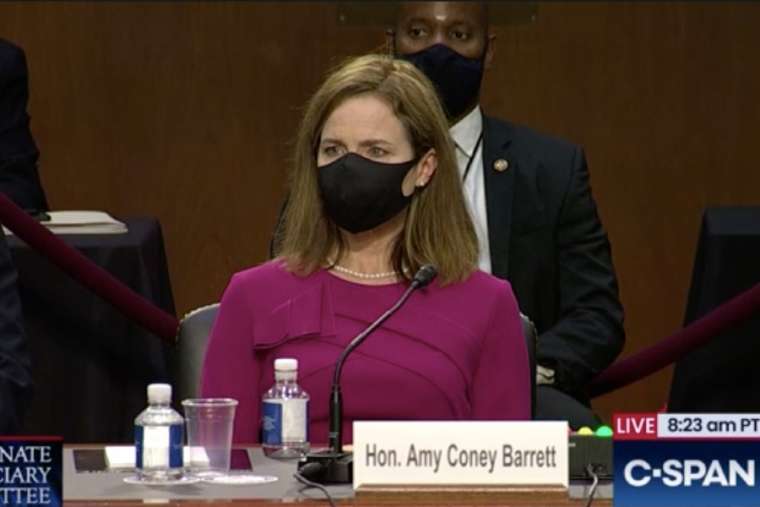 ‘I believe I can serve my country,’ Amy Coney Barrett tells senators

Senate hearings for Judge Amy Coney Barrett’s confirmation to the Supreme Court began on Monday, October 12, in a session that was held partially in-person in Washington and partially remote.

In her opening remarks, which werereleasedon Sunday, October 11, Barrett explained to senators why she accepted the nomination and what she believes she would bring to the Supreme Court.

“I believe Americans of all backgrounds deserve an independent court that interprets our Constitution and laws as they are written,” she said. “And I believe I can serve my country by playing that role.”

Barrett outlined her view of how a court should operate, as well as her judicial philosophy. She said that she was inspired by the late Justice Antonin Scalia, for whom she clerked.

Scalia, she said “taught me more than just law. He was devoted to his family, resolute in his beliefs, and fearless of criticism. And as I embarked on my own legal career, I resolved to maintain that same perspective.”

“There is a tendency in our profession to treat the practice of law as all-consuming, while losing sight of everything else,” said Barrett. This, she said “makes for a shallow and unfulfilling life.”

Barrett said she worked hard as both a lawyer and as a professor, which she said was owed to her clients, students, and herself, but that she “never let the law define my identity or crowd out the rest of my life.”

The judge said that this mentality carried on to how she viewed the role of courts.

“Courts have a vital responsibility to enforce the rule of law, which is critical to a free society,” she said.

“But courts are not designed to solve every problem or right every wrong in our public life. The policy decisions and value judgements of government must be made by the political branches elected by and accountable to the People. The public should not expect courts to do so, and courts should not try.”

Barrett explained that this had been her judicial philosophy during her time on the Seventh Circuit Court of Appeals, and that she has worked to reach a conclusion that is “required by the law,” regardless of her personal views on the topic being discussed.

“I try to remain mindful that, while my court decides thousands of cases a year, each case is the most important one to the parties involved. After all, cases are not like statutes, which are often named for their authors. Cases are named for the parties who stand to gain or lose in the real world, often through their liberty or livelihood,” she said.

Barrett said that she attempts to put herself in the shoes of the losing party when deciding a case, and asks herself how she would view the decision if one of her children were involved in the opposing party.

“Even though I would not like the result, would I understand that the decision was fairly reasoned and grounded in the law? That is the standard I set for myself in every case, and it is the standard I will follow as long as I am a judge on any court,” Barrett told the committee.

The judge also said that she was “forever grateful” for the path blazed by the late Justice Ruth Bader Ginsburg, and that it would be the “honor of a lifetime” to serve on the Supreme Court.

“I might bring a few new perspectives to the bench,” she said, noting that she would be the first mother of school-aged children to serve on the court, and she would be the only sitting justice who did not attend Harvard Law School or Yale Law. Barrett graduated first in her class from Notre Dame Law School, and later returned to the school as a professor.

“I am confident that Notre Dame will hold its own, and maybe I could even teach them a thing or two about football,” she said.

The members of the Senate Judiciary Committee spoke prior to Barrett’s opening remarks. The Democratic members of the committee were largely critical of Barrett’s nomination, while the Republicans were supportive.

Sen. Dianne Feinstein (D-CA), the ranking minority member of the committee said that the “stakes are extraordinarily high for the American people,” and said that she would make the Affordable Care Act the focus of her questioning during the hearings.

During Barrett’s first confirmation hearings, when she was nominated to the Seventh Circuit Court of Appeals, Feinstein made headlines after she said that “the dogma lives loudly within you” regarding Barrett’s Catholic faith.

Sen. Lindsey Graham (R-SC), chairman of the committee, opened the hearings Monday morning, saying he hoped to see “to the extent possible” a “respectful and challenging” confirmation process.