‘I have no agenda’ except public service, Barrett tells senators 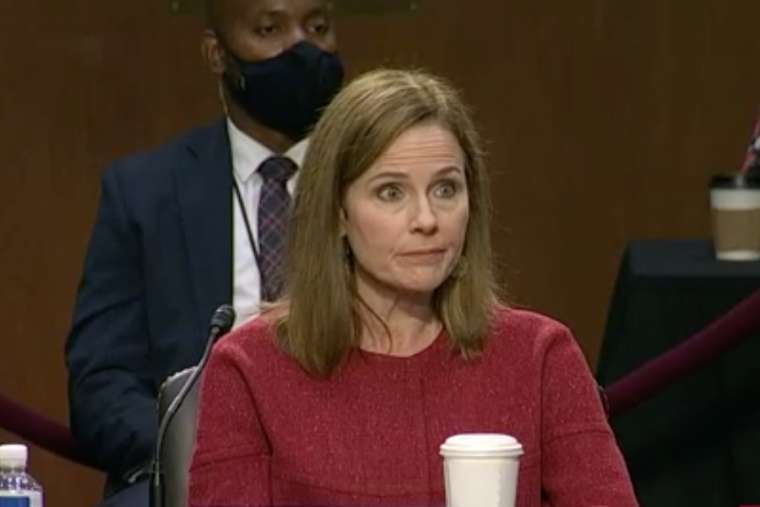 ‘I have no agenda’ except public service, Barrett tells senators

Judge Amy Coney Barrett explained to senators on Tuesday that she has no personal agendato overturn previous decisions if she is confirmed to the Supreme Court, and that she would consider each case on its own merits, according to the law.

During the morning of the second day of confirmation hearings, Sen. Dianne Feinstein (D-CA) asked Barrett to comment on whether the court’s landmark abortion decision inRoev.Wadewas wrongfully decided. Barrett declined to say outright one way or another, citing her position as a judge and a need to interpret law.

“I do want to be forthright and answer every question, so far as I can,” said Barrett, before referencing Justice Elana Kagan, who said during her own confirmation hearings that she “was not going to grade precedent or give it a ‘thumbs up’ or a ‘thumbs down’” on specific decisions.

The 1973 decision inRoev.Wadefound that there was a constitutional right to an abortion. The 1992 decision inPlanned Parenthood of Southeastern Pennsylvaniav.Caseyupheld the decision found inRoe, but also created an “undue burden” standard when it came to abortion law.

“I think in an area where precedent continues to be pressed and litigated, as is true ofCasey, it would beparticularly–it would actually be wrong and a violation of the canons–of me to do that as a sitting judge,” she said.

Barrett explained that if she were to signal her views on a precedent, in either a positive sense or a negative sense, it would send a message to litigants “that I might tilt one way or another in a pending case.”

“I can’t pre-commit or say, ‘Yes, I’m going in with some agenda,’ because I am not,” said Barrett.

“I don’t have any agenda. I have no agenda to try and overruleCasey. I have an agenda to stick to the rule of law and decide cases as they come.”

Instead, Barrett told Feinstein that she would “obey all the rules of stare decisis,” the legal principle of deference to the previous decisions of the court.

“I will follow the law of stare decisis, applying it as the court is articulating it,” said Barrett. “Applying all the factors–reliance, workability, being undermined by latter facts and law, just all the standard factors.”

“And I promise to do that for any issue that comes up, abortion or anything else. I’ll follow the law,” she added.

Earlier in the morning session, Barrett was asked by Sen. Lindsay Graham (R-SC), chairman of the Senate Judiciary Committee, about the experience of being nominated for the Supreme Court. Barrett said that while she had attempted a “media blackout for the sake of my mental health,” she was “aware of the lot of the caricatures floating around” about her family, faith, and beliefs.

“I think what I would like to say in response to that question is that, look, I have made distinct choices. I decided to pursue a career and have a large family. I have a multiracial family. Our faith is important to us. All of those things are true, but they are my choices,” she said.

Barrett said that in her personal and professional interactions with people, including those who “made different choices” than she has, that she has “never tried in my personal life to impose my choices on them.”

“I apply the law, and Senator, I think, that should say why I’m sitting in this seat, why I have agreed to be here,” she said.

Barrett called the confirmation process “difficult” and “excruciating,” and that she and her husband had “a very brief amount of time” to make the decision whether or not to accept the nomination to the Supreme Court. She said this decision came with “momentous consequences” for her family.

“We knew that our lives would be combed over for any negative detail, we knew that our faith would be caricatured, we knew our family would be attacked, and so we had to decide whether those difficulties would be worth it,” she said. “Because what sane person would go through that if there wasn’t a benefit on the other side?”

“The benefit,” said Barrett, “is that I am committed to the rule of law and the role of the Supreme Court and dispensing equal justice for all. I am not the only person who could do this job, but I was asked, and it would be difficult for anyone.”

“Why should I say someone else should do the difficulty, if the difficulty is the only reason to say no? I should serve my country, and my family’s all in on that because they share my belief in the role of law,” she said.