‘I really pray for these kids’: the Catholic ambassador on a mission to help Europe’s largest minority 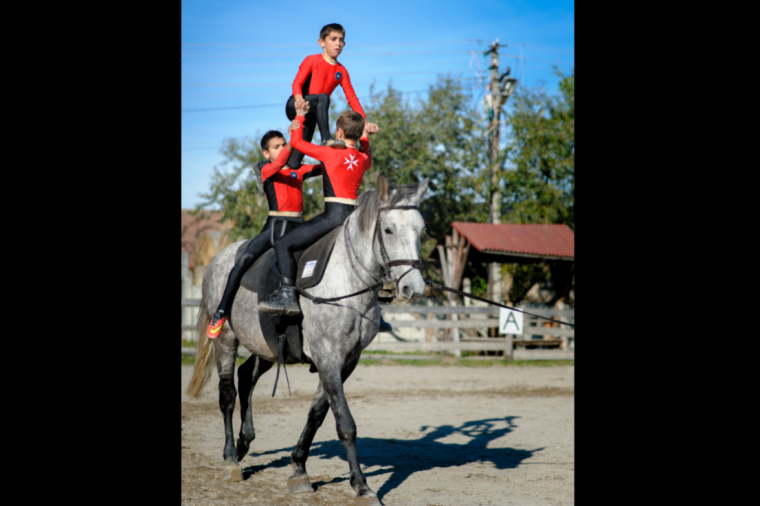 ‘I really pray for these kids’: the Catholic ambassador on a mission to help Europe’s largest minority

In 2013, Franz Salm-Reifferscheidt made a life-changing visit to Rome. The retired Austrian businessman had an appointment with the Grand Chancellor of the Order of Malta, an almost 1,000-year-old Catholic lay religious order.

After working for 30 years for a baby food company, Salm had settled into a comfortable retirement.

“I had a nice life, making a walk with my dog, and so on, and journeys with my wife and grandchildren,” he told CNA.

“And then this friend, the president of the [order’s] German association, said: ‘Come on! You have time. You are fit. Couldn’t you do something for the order?’”

Salm joined the Order of Malta when he was 26. But as he was now in his late 60s, he wasn’t sure what he could offer the organization which, as a sovereign body, has diplomatic relations with more than 100 states, and engages in charitable work in 120 countries.

When he arrived for the meeting in Rome, the Grand Chancellor spoke about the order’s diplomatic work.

“Then all of a sudden, he said: ‘What would you do better?’ And I thought about the Roma, because these people are the biggest minority in Europe with 12 million people. They are segregated. Nobody likes them. They live in terrible conditions in settlements without running water and electricity,” he recalled.

Salm suggested that the order could combine its diplomatic and social missions if it extended its outreach to the Roma people — commonly known as Gypsies — because their plight was also a political issue.

“The Grand Chancellor said: ‘That’s what we are really looking for.’ And two weeks later, I was appointed Ambassador for the Roma People at Large,” he said.

Salm quickly realized that he had accepted a staggeringly difficult challenge. Ever since the Roma arrived in Europe from northern India around the ninth century, they have suffered from hardship and persecution. Locals named them “Gypsies,” mistakenly believing that theycame from Egypt.

Today, despite their nomadic reputation, Roma are overwhelmingly sedentary. More than 70% of Roma households live in poverty and just one in four Roma children graduate from high school.

Despite these daunting facts, Salm set to work with an energy that impressed members of the order. Building on the organisation’s previous work with Roma communities, he developed initiatives in Albania, Austria, Belgium, Hungary, Romania, Slovakia, Slovenia, and Ukraine.

As a roving ambassador, he was able to link the projects together, drawing on his experience of building up the market for baby food in Eastern Europe.

Salm (pictured above) explained that a fully equipped center offers seven services: washing facilities, health checks, a kindergarten and playground, tutoring for children, counseling for mothers, apprenticeships, and a music school or other cultural endeavor.

One of the biggest obstacles to improving the wellbeing of the Roma is that parents take their children out of school in order to work. Salm believes that the Order of Malta has found a way of overcoming this problem that could serve as a model across Europe.

“Our donors ask: ‘How do you measure the success of your work?’ And it’s always the same: the children have more self-esteem, are clean and friendly — because that’s what we teach them every day –and, finally, much better in school.”

Salm cites a school run by the order in Romania.

“This school was within the last rank of all the schools in this district. And after four or five years, it went better and better. And now, seven years later, this school is in the upper third, far above the average. No kid in the last two years failed the class,” he said.

“And in our center, we could really come to the point where no kid misses the school. Of course, because they want to come to us.”

On Aug. 29, Salm will open the order’s 19th center for Roma people, in Croatia.

“The hardest part is to convince the mayors of the area that this work is necessary,” he said, because they believe that offering any help to the Roma encourages them to settle permanently.

But it is possible to win local officials over. The ambassador cited the example of a settlement in Romania, where the order has opened a riding school, giving children the opportunity to learn skills such as equestrian vaulting, or gymnastics on horseback.

When lockdown was imposed on the country this spring, some Roma communities resisted quarantine measures, leading to clashes with police.

“Almost everywhere there was an aggressive reaction, unfriendly. So for the authorities not a very easy situation, very unpleasant. But not in this center where we have this horse riding. The mayor was from the beginning against this center, always, until this year when there had to be quarantine for this center,” he said.

Another major concern for Salm is fundraising. He currently has a budget of 1.5 million euros ($1.8 million). But given the economic uncertainty resulting from the coronavirus crisis, he is not sure if he will be able to replenish it when it runs out.

He said: “I have to do the fundraising myself. I would say this is the most difficult work. My wife is always astonished that it is possible for me to find donors. But this year it’s 1.5 million euros and I have it. I can finance the work for this year. But what will be next year?”

Salm emphasized that the Roma community in Europe is not homogenous. There are different subgroups in different countries.

This diversity extends to religion.

Salm is now 76, but he is determined to keep serving the Roma people until his 80th birthday.

“I want to do it four years more, if God allows me and gives me the power and the help to do it. And then I have to find somebody else who does it,” he said.

In the coming weeks, Salm will not only celebrate the opening of the new center in Croatia. He will also mark the 50th anniversary of his wedding — coronavirus restrictions permitting — with his four children, seven grandchildren, and other close family.

Asked if his Catholic faith helped him in his work, he said: “Very much. I really pray for these kids, these families, and I have to live with the knowledge that every human being has the same dignity. And if you believe in this dignity, then it’s not a question if you help, it’s just a question how to help.”