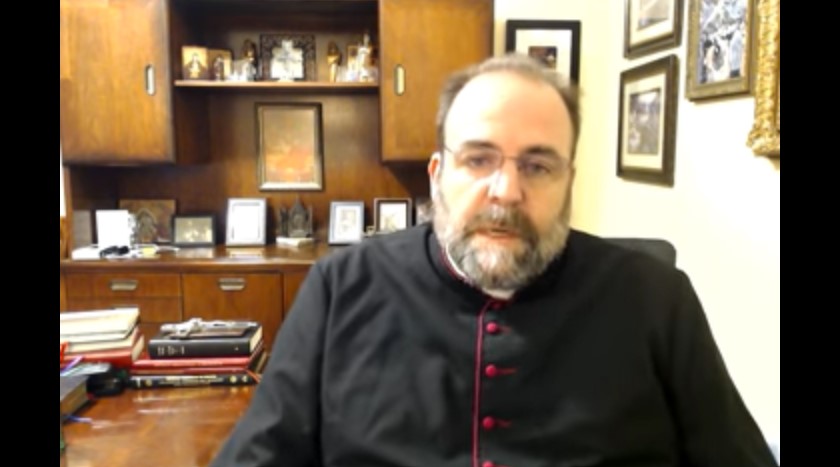 “In this world you shall have tribulation. But have confidence, for I have overcome the world.” (John 16:33)

It was July 27,a fairly normal Monday at the parish. I was up early for the radio show followed by a private Mass. Strangely, my nerves were shot, and I had no appetite. By early afternoon I had a fever of 102.5 and felt horrible. A parishioner friend offered to drive me to the nearby urgent care center. Both of us masked up, and we made the short drive.

I could barely fill out the multiple forms required but was seen rather quickly. Given my symptoms I was given the rapid test for COVID-19. A grim-faced nurse practitioner reported the results to me: “You are positive for COVID-19.”

My mind raced as I envisioned all the possible repercussions,and sure enough, all of them would later come to pass. Priests do not live an isolated life — we interact with so many people! Consequently, by midweek nearly 300 people with whom I had been in recent contact were informed that they should self-quarantine for 14 days and be tested themselves. I was more concerned for them than for myself. The rectory and church were then shuttered for nearly two weeks, which was particularly painful given that we had just begun to get up and running after nearly four months of closure.

The urgent care center referred me to the emergency room at Georgetown University Hospital because my blood oxygen level was rather low. My condition stabilized in the emergency room, however, and I was sent home and instructed to self-quarantine. I had been told to get a pulse oximeter to monitor the oxygen level in my blood. So, I dutifully stuck my finger into the device several times each day to gauge my oxygen saturation. I learned that numbers in the mid-90s are good, but I was told that if the oxygen level dropped into the 80s, I was to return to the hospital at once.

At first it seemed that my response to COVID-19would be similar to a flu. I had a light cough and mild fever and improved steadily over the next several days. Another member of the rectory household, who had tested positive just a day before I did, had only minor symptoms for a few days and then recovered. I expected my trajectory to be similar.

It was not to be. Just as the flu-like symptoms were abating I became short of breath and my oxygen levels dropped into the mid-80s. I was taken immediately back to Georgetown University Hospital and admitted to the Intensive Care Unit, where they gave me 100% high-flow oxygen and various treatments and medications to help fight my respiratory failure. Remdesivir, an antiviral, and a number of steroids were used. Thanks be to God, I began to improve. I spent 11 days in the ICU, however, and once I was weaned off the oxygen and my lungs were clear I was sent home with orders to rest. I was indeed quite feeble after 11 days spent in bed or in a hospital chair. Slowly I have recovered my strength. COVID had finally left the building!

I cannot deny that it was an ordeal, and it did not help that the Washington Post published a piece about me that was filled with distortions and lies.Despite the claims they printed, I have never told people not to wear masks or not to socially distance, nor have I suggested that anyone violate civil laws or norms. In addition, I certainly never said that those who have not returned to Mass by now are lukewarm Catholics. There are many people who should not be attending Mass just yet due to vulnerabilities.

Thanks be to God for my staff, who protected me from the hate mail that arrived, electronically and via “snail mail.” They told me that the mail was more awful than they could ever have imagined. Thanks be to God, too, for all of God’s faithful who did not believe the things written about me in the article and repeated on local television news stations. I am sincerely grateful to prominent journalists Claire Guernsey and Chris Bedford, each of whom wrote an article to set the record straight.

Lying flat on my back in the ICU I sighed to the Lord. But he reminded me, “I’ve got you close to me right now at the cross. Remember, Carlito, they distorted my words, too. They gave false and conflicting testimony, and I too suffered respiratory failure on the Cross.” An old gospel song says, “God says, ‘I got this, so you let go.’” Okay, Lord, it’s yours.

When my sorrow and anger would occasionally return, I sought refuge in the immense gratitude I had for all who were praying for me.A friend and colleague of mine in the EWTN world told me something astonishing and true. He said, “It’s quite likely that right now a million people have prayed for you.” Wow!

And I cannot speak highly enough of the skilled nurses, doctors and medical staffwho were both professional and compassionate. Because I was in isolation, they were my sole visitors. Even if they came only to draw blood, I was grateful for their company and for the simple fact that, with proper protective gear, they were willing to take my hand to reassure me in moments of sorrow and uncertainty.

At the time, I could only return the millions of prayers and beautiful care by praying Rosaries and the Chaplet of Divine Mercy. Now, I have offered Masses as well. I can never thank them enough! In a dark moment I complained to the Lord that I could not see his face or feel his presence. He said, “Look again and see me in the faces of the doctors and nurses, hear me in the prayers of the million who are praying for you now.” Okay, Lord, I know. I have preached that; now I must live it.

Ongoing concerns:With the death toll in the United States approaching 200,000, COVID-19 is not something to dismiss with a wave of the hand. I have always said that we need to take the virus seriously. However, I have also been among those who believe the effects of the shutdowns should be taken seriously as well. We need to find a proper balance between the effects of the disease and the effects (economically, socially and personally) of the restrictions.

Regarding the Church,I think we are only beginning to discover the toll that the suspension of sacraments and liturgical functions has had. Most parishes report that only 20-40% of communicants have returned. Certainly there are some who should not return yet, but it is beginning to dawn on us that our parishes are going to be a lot smaller and less viable in the near future, even if a vaccine is found or the danger of COVID-19 diminishes.

Some are predicting renewed shutdowns (to include churches) in the fall when seasonal flu is added into the mix. Will we as a Church simply comply the same way we did before? Will we be more creative in getting the sacraments to people outside of large indoor gatherings (e.g., Communion outside of Mass or as part of an outdoor liturgy)? Will we lock our church buildings entirely? Will we keep them open for personal prayer? Will our bishops vigorously advocate for the essential nature of church attendance with public officials, or will liquor stores and protest marches continue be deemed more essential? Will they quietly comply with another call for total shutdown? All this remains to be seen. And this leads to my final point.

Some have asked me, “Have you changed your views on COVID-19 now that you have been so sick with it?”No. I am a survivor. COVID-19 brought me to the precipice. Respiratory failure is extremely serious — even deadly. Thanks be to God, the medical staff went right to work and, thanks to recent advances made in treating the most serious forms of the disease, they knew exactly what to do so that my immune system would be able to fight back. COVID-19 is not an automatic death sentence. I survived, and so do most people who get it.

So, my call to all of us continues to be that we place our fears in perspective. Despite my own struggle with COVID-19, I was in the rarefied category of the 5% who require the ICU. Hence, my concern remains that our fears are out of proportion to the actual risks. Prudence directs that we should take reasonable measures to hold down its spread. Wearing a mask, social distancing and washing our hands frequently are part of what we have been asked to do, and observing these reasonable requirements is both just and prudent.

But in a secular world where suffering and death have lost all meaning, we must not succumb to meaninglessness.Each of us is called to be a beacon of hope who reassures others that even when the worst comes, God is still at work and can draw great goodness from suffering; He can instill humility in us and produce a future glory that far outweighs the suffering (see 2 Corinthians 4:17). We have been too silent about this, fearing that people will say we “do not care” that people are suffering and dying. Wedocare, and we do not want their suffering and even possible death to be meaningless!

A life courageously lived accepts the risks of this world and prudently avoids unnecessary ones, trusting that God has a plan that is meant to perfect us and prepare us for the glory that awaits. Jesus says, “In this world you shall have tribulation. But have confidence, for I have overcome the world” (John 16:33).

Lord, help us to know the way. We are summoned to find that delicate balance between cowering fear and reckless foolishness. Help us also to find the proper balance between necessary protections and heavier measures that may deprive people of their livelihoods and the precious human interactions that make for life. We are seized by many fears today. Some of them are appropriate; others are excessive. Help us to distinguish and to find our way to that balanced place we call prudence. Help us also to be patient with one another. Some have more reason to remain secluded. Others have an urgency to get back to work, to provide for their families, to interact with others. Each of us has decisions to make, and all of us need your grace to decide well and to trust you. Help us, Lord. Save us, have mercy on us, and keep us by your grace. Amen!

Why Charles Dickens Cried When He...