In Fiery Debate, Trump and Biden Clash Over Barrett Nomination and Abortion 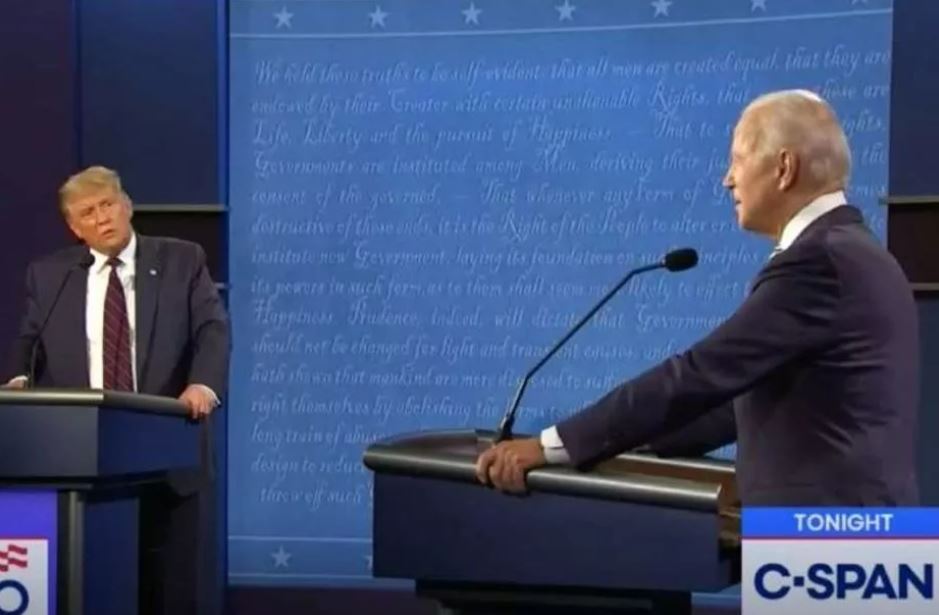 In Fiery Debate, Trump and Biden Clash Over Barrett Nomination and Abortion

While the 90-minute debate was marked by fiery exchanges from both candidates, both presidential candidates did offer some remarks on abortion and the Supreme Court.

While the 90-minute debate, held in Cleveland, Ohio, was marked by fiery exchanges from both candidates, with frequent interruptions during answers, both presidential candidates did offer some remarks on abortion and the Supreme Court.

Moderator Chris Wallace asked the candidates about Trump’s recent nomination of Judge Barrett to the Supreme Court, and for their thoughts about how Barrett might change the balance of the court.

Trump, who answered first, said that Barrett was a “phenomenal nominee” who had the support of “very liberal people from Notre Dame and other places.” Barrett, said Trump, is “going to be fantastic.”

“She’s going to be as good as anybody that has served on that court,” said Trump. The president defended his nomination of the judge during an election year, which has been criticized by Democratic lawmakers, who contrast the nomination with the Senate’s 2016 refusal to have a hearing on the nomination of Judge Merrick Garland to the court. Trump said that the Republican Party controls both the Senate and the presidency and therefore has the votes to confirm his nominee. In 2016, under President Barack Obama, the Democratic Party did not have the votes in the Senate to move forward with the confirmation process.

Trump added that he was elected to serve as president for four years, not three years, and had the right to fill vacancies in the Supreme Court any time they arose during his four-year term.

“They’re not going to get that chance now because we’re in the middle of an election already,” said Biden, noting that many people have already cast their votes.

Biden was also asked if, should he be elected, he would support efforts to add justices to the Supreme Court beyond the nine now prescribed by law. Biden declined repeatedly to answer the question.

Biden said that the Affordable Care Act, legislation that was passed while he was serving as vice president, was at stake due to Barrett’s potential presence on the court.

“And the justice–I’m not opposed to the justice–she seems like a very fine person,” said Biden. “But she’s written, before she went on the bench, which is her right, that she thinks that the Affordable Care Act is not constitutional. The other thing that’s on the court, and if it’s struck down, what happens? Women’s rights are fundamentally changed.”

The former vice president, a Catholic and strong supporter of expanded access to abortion, also suggested that abortion rights could be at risk if Barrett is confirmed to the Supreme Court.

“The point is that the president also is opposed toRoev.Wade,” said Biden. “That’s on the ballot as well and the court, in the court, and so that’s also at stake right now.”

Trump pushed back at the apparent notion that overturning theRoev. Wadedecision was on the ballot this November, saying that “it’s not on the ballot.”

“There’s nothing happening there,” Trump said, referring apparently to the issue of abortion at the Supreme Court. Trump did not elaborate.

Wallace said the conversation would eventually return toRoev.Wade, but the topic was not again raised during the debate.

What Black Lives Matter Can Learn...