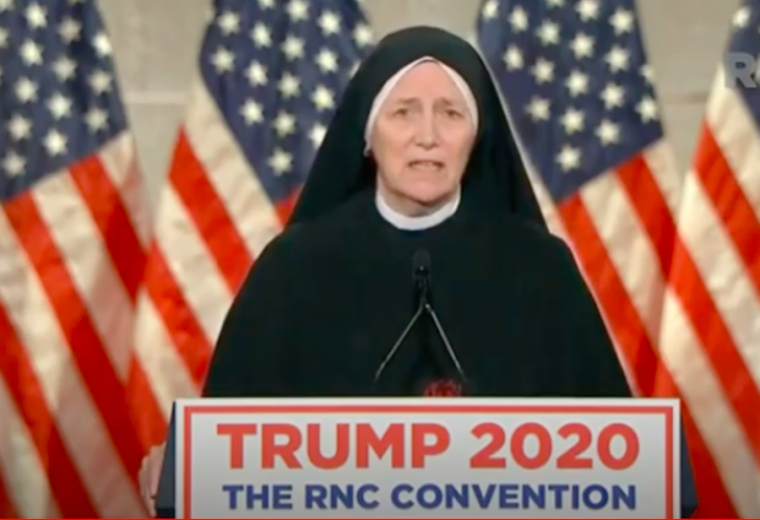 The Spanish-language broadcast of a Catholic sister’s speech at the Republican National Convention this week replaced the words “pro-life,” with “anti-abortion,” a move that raises questions about the integrity of the broadcast.

In all three cases, news network CNN en Español translated the phrase as “anti-aborto,” or “anti-abortion,” during its broadcast of the speech.

“Pro-vida” is a commonly used Spanish-language idiom, used analogously to the English-language idiom “pro-life.” Proponents of the phrase say it is evocative of a broad commitment to the dignity of human life, and that “anti-abortion” is a comparatively reductive rendering which does not convey the same meaning.

The AP style guide’s exception, however, is for quotations, which journalistic ethics require to be reported with complete accuracy.

The Reuters Handbook of Journalism explains that “quotes are sacrosanct. They must never be altered other than to delete a redundant word or clause, and then only if the deletion does not alter the sense of the quote in any way.”

The use of “anti-aborto” rather than “pro-vida” to translate Byrne’s phrase, “pro-life,” has been met with frustration from some Hispanic pro-life advocates.

“Sister Deirdre Byrne’s speech during the Republican National Convention pointed out the importance of taking a clear pro life stance from the perspective of science, faith and simple common humanity,” Marcial Padilla, director of the Mexican pro-life organization Concience and Participación, told CNA.

“CNN en Español decided to embarrass itself, and did not have the minimum decency of translating Sister Deirdre’s words correctly. I hope CNN’s contempt is noted by the voters, who should know that they are not an objective source of information. Unfortunately major media outlets in the world are becoming less objective transmitters of the facts and more political operators against the right to life,” Padilla added.

Mexican physician María Denisse Santos of the Coalición de Líderes Provida told CNA that ”to say that we are ‘pro life’ is to tell the truth, because we are indeed defending the right to live of the little ones. To try to hide that truth by calling us ‘anti-abortion,’ as CNN en Español did with Sister Byrne’s speech, is in fact to recognize that they are afraid to acknowledge that being ‘pro-choice’ is to be in favor of someone’s death.”

“But the truth will shine at the end, that we are pro-life and pro-eternal life,” Santos said.

One professional translator, who requested anonymity because of her position, told CNA that “it is very hard to believe that the interpreter chose to change ‘pro-life’ to ‘anti-aborto’ on her own. In our trade, we have some room to choose specific words in order to better clarify a concept, but we can’t make any kind of subjective interpretation. So much so that our interpretations are trademarked. The only reason why an interpreter would do something like that is if she or he is under a very specific protocol from the customer (client), like someone who works, say, for the UN, and needs to avoid some words for political or diplomatic reasons.”

The code of ethics for the American Translators Association explains that “linguistic integrity is at the core of what translators and interpreters do.”

Translators faced with an idiomatic expression should use “an idiom that conveys the same meaning, register, and impact” as the one being translated, the association explains. It emphasizes that “Impartial translation and interpreting requires the translator or interpreter to adopt a mantle of neutrality,” and calls it “inappropriate to “clean up” objectionable language in the target language.”

The “Translator’s Charter” of the International Federation of Translators requires that “every translation…be faithful and render exactly the idea and form of the original.” CNN en Español has not responded to requests for comment from CNA.

Polling shows that while Latino voters favor Biden over Trump, the president has the support of a larger share of Latino Catholic voters than he did in 2016. The Trump reelection campaign has emphasized its view that Trump is the “most pro-life president in history” in outreach to religious voters.