In Vatican City, Chefs Prepare for the Christmas Feast 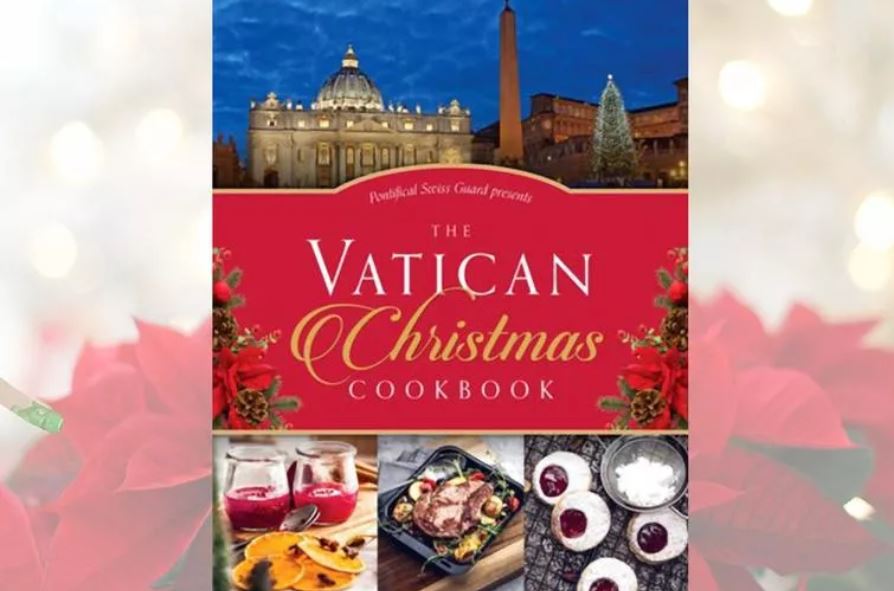 In Vatican City, Chefs Prepare for the Christmas Feast

The Vatican Christmas Cookbook Lets You In On Their Secrets

Christmas is such a special time of year! Even during this time of pandemic, you want to celebrate the feast with a display of fine dishes. Imagine your family, wide-eyed at the sight of culinary delights: pork tenderloin in puff pastry, veal chanterelle, caponata gamberoni! Pumpkin soup amaretto, tagliatelle porcini, roasted trout with fennel and baguette! Ah, and then the dessert! Gingerbread plum parfait, dark toblerone mousse, cinnamon stars!

All of these treats and more are featured in The Vatican Christmas Cookbook, just released by the Pontifical Swiss Guard and co-authored by David Geisser and Thomas Kelly. While clergy in Vatican City are preparing for the Christmas liturgy, chefs are busy, too. Like cooks in homes across America, they’re preparing for the upcoming Christmas feast. The Vatican Christmas Cookbook gives you the opportunity to try the favorite dishes of Pope Francis and earlier popes, and to sample recipes from around the world. It’s chockful of mouthwatering recipes that utilize everyday ingredients from your cupboard in an unforgettable way.

Co-author David Geisser is uniquely qualified to share the favorites of popes and prelates. A celebrity chef, founder of a cooking school, and host of a popular cooking show in his native Switzerland, Geisser has authored seven books including The Vatican Cookbook, released in 2017, and now this beautifully illustrated holiday special. And as a former member of the Swiss Guard, Geisser served Pope Francis and talked with top Vatican officials about the pontiff’s favorite dishes. He incorporated into the book some of the pope’s favorites from his native Argentina. Geisser explains that for most Argentinians, the season’s main event is Christmas Eve. Many Catholics, he says, attend an afternoon Vigil Mass as a way of beginning the holiday festivities, which may continue late into the night.

“In these festivities,” Geisser explains, “the main meal is served late, often after 11 p.m. The warm weather allows the Christmas Eve dinner to be a barbeque, with turkey, pork, and goat being among the most popular entrees. For appetizers, canapes navideños are favorites. These are small, open-faced empanadas with a variety of fillings, including meats and cheeses, fruits and vegetables, and herbs and spices. The traditional Christmas desserts are pannetone and pan dulce, delectable Argentinian pastries.”

The book doesn’t stop at explaining Argentinian favorites, though. Geisser describes the typical holiday feast in Egypt, Switzerland, the Philippines, Poland, China and around the world. And there’s more: Great cooks prepare special meals not just on Christmas, but throughout the season — so Geisser has included sections on Advent, Christmas Eve, and Christmas Day, as well as a chapter on side dishes.

In the section on “Christmas with the Popes,” Geisser tells the reader about Pope Saint Leo the Great, sometimes called “the Pope who saved Christmas.” He recounts the story of Pope Gregory’s holiday fare in 592, and the Mass celebrated by Pope Benedict XV in 1919 in a time of pandemic, during the Spanish Flu. And this was my personal favorite: Geisser reveals how it was just one week after his swearing-in at the Courtyard of San Damaso as a member of the Pontifical Swiss Guard, on May 13, 1981, that his newly sworn solemn oath to protect the pope and the Church with his life was put to the test.

“I was stationed at the Portone di Bronzo,” Geisser writes, “as thousands filed in for the weekly audience. When the Popemobile rolled into the square, the crowd surged to get close to their beloved John Paul II. Suddenly, a commotion near the pope and the sounds of shots fired. I sprinted to the scene and helped as best I could.”

Oh my gosh, David was there! He and other Swiss Guardsmen hurried the would-be assassin away from the enraged crowd to the small police office by the Portone while other Guardsmen raced the wounded pontiff to the hospital through the streets of Rome. He describes the Pope’s slow recovery, and his gradual recovery. Geisser was among the Guardsmen who had the special honor of serving as Guards of the Throne during Midnight Mass on Christmas Eve 1981.

“It was the night,” he explains, “when I witnessed the resurgence of the Holy Father. He was energized by the profound meaning of this night, and the faithful that surrounded him. It was a great joy for me to participate in this beautiful service.”

Part storybook, part cookbook, part coffee table picture book, The Vatican Christmas Cookbook is a treasure to give as a gift, or to display in your home.