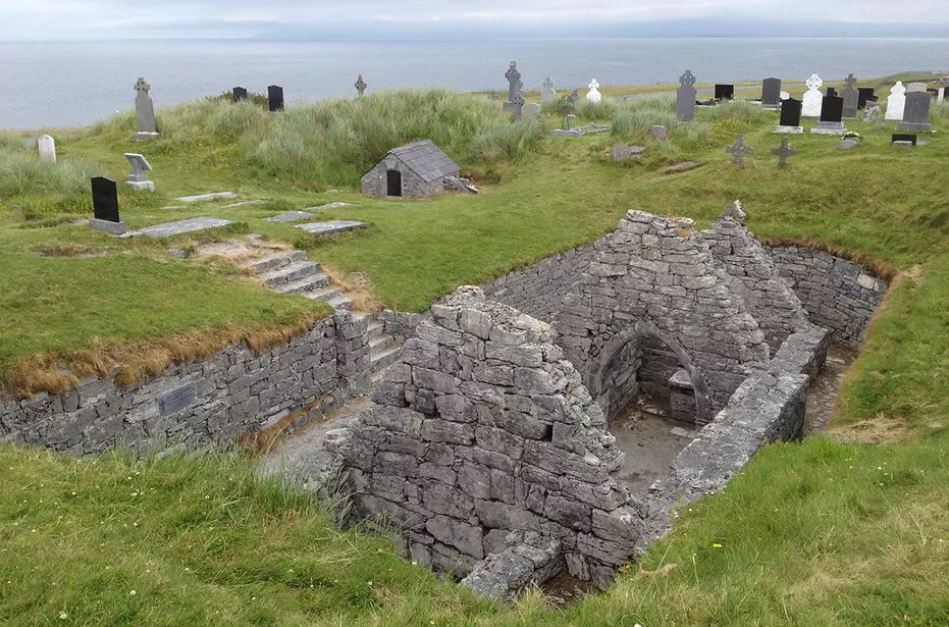 Inis Oírr is dotted with monastic ruins dating back to the Celtic Church, and Iron Age ramparts and forts steeped in legend.

Inis Oírr is located off the West coast of Clare, a desolate but beautiful limestone island jutting out of the Atlantic. Exposed to the sea breeze and with spray in the salt air, it’s as close to the edge of the world as you can be. The next parish going due west is in the United States.

Inis Oírr (pronounced Inisheer) is the smallest of the three Aran Islands. The islands are located off the coast of Galway on Ireland’s western seaboard. Each has its own allure and beauty, dotted with monastic ruins dating back to the Celtic Church, and Iron Age ramparts and forts steeped in legend. The island comprises around three square miles of limestone, of similar form to the Burren in Clare, with around 250 inhabitants. After spending even a short time there, it is easy to understand its appeal to hermits, monks and early religious seeking to be closer to God.

“That spirituality is to be felt and sensed in the very stones, particularly in the old monasteries like Teampall Chaomháin on Inis Oírr…” [Father Pádraig Standun, author and 1970s-era curate, Inis Oírr]

There are three main holy sites. The church of St. Caomhán (pronounced Keevaun), Tobar Éanna, St. Enda’s holy well and Cill Ghobnait — An Teampall Beag (The Small Church) named after St. Gobnait. Also, while you are there, a visit to the parish church is essential, and if Mass is being said it will be in Irish.

Teampall Chaomháin [Keevan’s Church] is a remarkable Celtic church. It is located below the level of the surrounding sand in the hilled graveyard and can become submerged when the sea gales blow sand into it. Then the islanders have to dig it out for visitors. Going down the hewn steps into the ancient sunken ruins is to descend into a place of calm and Celtic spirituality.

St. Caomhán’s grave is located just beside the church and it is possible to step down into the small stone roofed crypt for a moment’s prayer and contemplation. A beautifully inscribed stone slab marks his grave.

St. Caomhán was a brother of St. Kevin, the Abbot of Glendalough in Wicklow.  Possibly both saints had been taught by St. Éanna of Inis Mór, the famed abbot who lived on the neighbouring island.

According to tradition, the grave of Caomhán has curative powers. Caomhán is the patron saint of the island’s fisherman. When the sea is rough, the boatmen’s families would pray ‘Cá’il tú a Chaomháin?’ (Where are you, Caomhán?) casting upon the waves white sand taken from his grave to ensure their loved ones’ safe return in their currachs.  His feast day or ‘Pattern Day’ is celebrated by islanders on the 14th of June, with open-air Mass at the church and a vigil the night before.

Cill Ghobnait — An Teampall Beag (The Small Church) is named after St. Gobnait, the patron saint of bees and beekeeping. The small church remains still possess the original altar. Outside there are a handful of unusual hollowed out stones and nearby a ‘beehive’ dry stone hut. Gobnait lived on the island having fled danger. She left after having a vision in a dream and traveled onwards to Cork where she founded a  monastery.

The island has a scattering of other ancient remains. A walk southwest of about 30 minutes along winding stone walled boreens brings you to Tobar Éanna, St. Enda’s holy well. Legend has it that if you go to the well, walk around it seven times reciting the Rosary, and see an eel in the water, you will be cured of your ailments. It is a peaceful and beautiful place, ideal for a quiet moment of thought, prayer and contemplation. Around you the sound of buzzing insects, cattle lowing and the nearby crash of Atlantic waves on limestone.

Inis Oírr has, of course, its other attractions. The people on the island predominantly speak Irish and will strike up a conversation with you in their native tongue. Amidst your walks, cycles or travels by pony and trap, you can drop in to one of the island’s three pubs for a pint of creamy Guinness and enjoy some fresh fish right off the boat. Mackerel, crab, lobster, or whatever the fishermen have caught that day. You can walk to O’Brien’s fort, or ramble on further south to view the Plassey Shipwreck. Or you can just wander the ancient narrow paths and marvel at the small fields, the soil painstakingly cultivated over generations on limestone with sand and seaweed carried from the shore. And with the scent of flowers and wild garlic in the air, you can watch as the sun sets over the desolate western shore at dusk.

Getting there: by Ferry from Rossaveal in Connemara or from Doolin in Co Clare; by plane from Connemara Airport: https://aerarannislands.ie