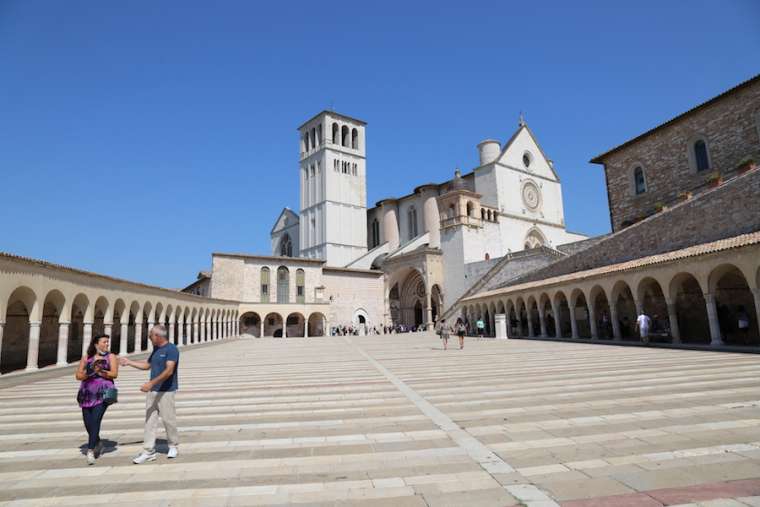 COVID-19 has taken its toll. Italy’s National Tourism Agency reports a full 90% drop in total bookings from non-Italians between July 13 and Aug. 23. The agency projects 35 million fewer international visitors will come to Italy in 2020 than did last year.

International tourism to Italy from many non-European countries, which includes pilgrimages, is deemed “non-essential travel” and barred. But, even within Europe, most people are playing it safe and staying close to home.

Visits to Italy from neighboring France and Spain, where COVID-19 cases are again on the uptick, are even down by 80-90%.

Destito, though, doesn’t see all as lost. “We’re seeing a rise in internal tourism,” he said. “Italians who are rediscovering Italy, especially the small towns that are the historical, cultural and religious patrimony of our country.”

Out on the road, the change can be seen. On the August 15 Feast of the Assumption, many local Roman residents headed to the mountains or the sea for some respite, making a ghost town of the Eternal City.

In years past, a day in Assisi without hearing any language but Italian would have been unthinkable in the summertime, especially on a major feast. But, on Aug. 2, the Franciscan feast of the Perdono, Italians and, seemingly only Italians, were out in a steady stream.

On one street, an accent from the North. On the next, an accent from the South. A group of youngsters on a parish outing from Rome with their young priest, stopping in at the tomb of soon-to-be “Blessed” Carlo Acutis. But, it’s just a trickle compared to the flow of humanity Assisi is used to.

“Without Russian, American, Japanese and South Korean tourists, the city as it is won’t last long,” a taxi driver said.

From his perspective, the city of peace was just a bit too peaceful. He lamented the economic losses to the city and its inhabitants, and wondered if things would ever return to normal.

That was just beforea recent outbreak of COVID-19 that infected 18 Franciscan novices and friars in Assisi this week, which could drive visitor numbers down even further.

While some summer processions and Church celebrations have been canceled, others have only been scaled back. For pilgrims who take a chance and venture out in Italy, there is a unique opportunity to experience cities, sites and feasts without huge crowds.

At the Shrine of the Holy Face in Manoppello, Italy, the August 6 Feast of the Transfiguration would have normally been marked with an outdoor fair and events in addition to the liturgies.

This year, the main evening Mass was celebrated outdoors for the first time, with all the anti-Covid measures in place, on the steps of the Basilica.

While the majority of those participating in the celebrations at Manoppello were local residents, some intrepid individuals crossed international borders to come.

44-year old Dr. Andreas Weig was one of them. After being forced to cancel a planned May visit due to the pandemic, he was glad to make it to Manoppello even if it was for the truncated Transfiguration festivities. Weig, who works as a jail physician near his home of Saint Poelten, Austria saw an opportunity and took it.

“It wasn’t too complicated,” he said over breakfast. He took a flight two days earlier from Vienna to Rome and then a train and taxi across the Appennines to the site after finding the local bus service was suspended.

“I still feared a bit because the numbers [of COVID-19 cases] in Austria are already rising a bit again. So, I hoped it would be possible because I thought well maybe there will be more restrictions soon. So, I think it was the best time to travel now. Who knows what will be in Autumn.”

Swiss Angelo Rytz and his Hong Kong-born wife, Agatha, drove seven hours from Morbio Inferiore, Switzerland down to Manoppello for the occasion. They did a bit of second guessing before making up their minds.

“We have been here already many, many times and especially for this feast we always come and so we decided we should have to be here this year,” said Angelo.

The arrival of pilgrims is a solace for the Shrine after five long months without visitors.

Fr. Carmine Cucinelli, the Rector of Manoppello’s Shrine of the Holy Face, said buses are unable to fill to capacity while respecting distancing restrictions.

“We’re now in August, but I think in September things will begin to improve and little-by-little we hope to return to the usual activity, so receiving many pilgrims and explaining the importance of the Holy Face to them,” said Fr. Cucinelli.

Meanwhile, at the Casa del Pellegrino pilgrim house adjacent to the shrine, employee Emanuele di Fabio says they’ve got 1000 fewer people passing through per week between the hotel and restaurant.

Through a black facemask, he said, “we’re really feeling the absence of the pilgrim, the group, the buses… unfortunately.” He’s already looking ahead to next year.

“Spring of 2021 we should return to normality, as long as nothing more happens. If something happens, who knows, but we’re hopeful.”

“People are still scared,” said Fr. Matteo Siro, provincial minister to the Capuchin friars of the Umbria, Lazio and Abruzzo regions. He was also in Manoppello, presiding over the celebrations. He said there’s hope to be found in marking major feasts publicly.

“Our path as Christians is marked by these strong moments which in times of COVID-19 were nullified for reasons that were beyond us. Taking up [public celebrations] again gives concrete signs of restarting, which gives comfort to people both for daily life and for our faith,” said Fr. Siro.