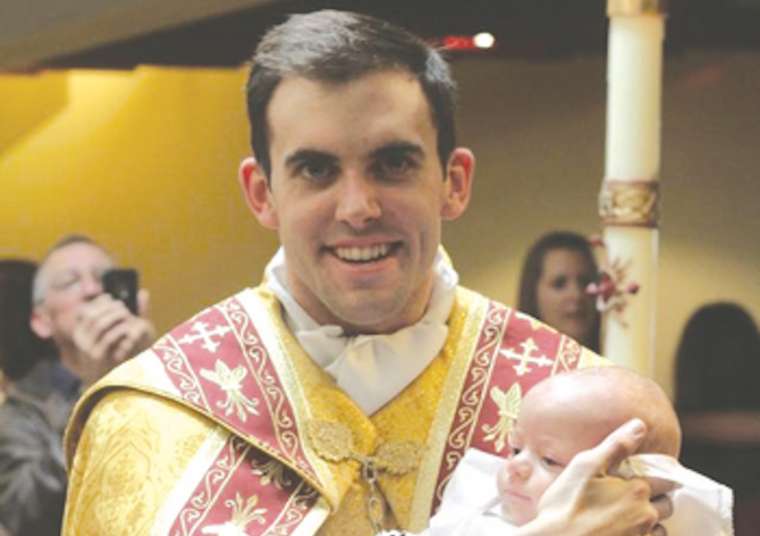 In the second known instance in the United States, a man who believed himself to be a validly baptized Catholic and ordained priest had to “re-receive” all of his sacraments, including ordination, after discovering that his baptism was invalid.

Fr. Zachary Boazman, a priest of the Archdiocese of Oklahoma City, thought he was validly ordained in 2019. But in August, theVatican’s Congregation for the Doctrine of the Faith issued a doctrinal note, reminding Catholics that baptisms are not valid if the minister of the baptism changed the words, or formula, of the baptism from “I baptize you” to “We baptize you.”

Boazman, who was baptized in another diocese in 1992, reviewed a videotape of his baptism after the announcement from the Vatican and discovered that the deacon ministering his baptism had used the invalid “We baptize you.”

A Sept. 14 letter sent to priests, deacons and staff of the Archdiocese of Oklahoma City, and shared with CNA, said Boazman was “immediately contacted Archbishop Paul Coakley to explain the situation and seek guidance” after his discovery.

Because Boazman’s baptism had not been valid, the subsequent sacraments he received – reconciliation, Holy Communion, confirmation, ordination – were therefore also not valid. His invalid baptism also invalidated many of the sacraments he offered before his valid ordination, including Masses, confessions, and some marriages. A key exception to that are the baptisms ministered by Boazman, as baptisms can be validly performed by anyone using the correct formula (wording) and the right intention.

Within days of Boazman’s discovery, he was validly baptized Catholic and validly ordained as a priest.

“This has been a heart-breaking experience for Father Zak, but one that he handled with grace and patience,” Coakley said in the letter.

“I am certain this past week, as unsettling as it was, will further strengthen Father Zak’s resolve to serve God’s people and develop an even deeper appreciation for the gift of the priesthood.”

Boazman could not be reached for comment on September 16, as he was on retreat.

The Archdiocese of Oklahoma City encouraged anyone with concerns about sacraments they have received from Boazman prior to his valid ordination to call the archdiocese.

Boazman is not the only priest to have recently discovered that he was not even a Catholic, let alone a priest.

In August, soon after the Vatican announcement, Fr. Matthew Hood of the Archdiocese of Detroit remembered from the tape of his baptism that the ministering deacon had said “We baptize you…”

Hood contacted the Archdiocese of Detroit and after he validly baptized and receiving valid sacraments of penance, Holy Communion, confirmation, and diaconal ordination, he was validly ordained a priest on Aug. 17.

Hood’s storyraised concern among some Catholics about whether their own baptisms had been valid, and to what extent they should go to find out. The Catholic Church normally presumes a sacrament is valid, unless there is some proof to the contrary, such as the videos of Boazman’s and Hood’s baptisms.

While the Congregation for the Doctrine of the Faith concluded baptisms administered according to the “We baptize” formula are invalid, another Vatican congregation had previously given advice to the contrary.

A letter sent to a diocese from an undersecretary of the Congregation for Divine Worship and the Discipline of the Sacraments, and published in the 2003 issue of “Roman Replies and CLSA Advisory Opinions” addressed the “We baptize you” formula.

“The liceity of such a celebration, however, is quite another matter.”

“It is the responsibility of the celebrant of Baptism to confer the Sacrament in a way that is licit as well as valid, and any infraction such as the one you describe should be brought immediately to the attention of the local Bishop.”

But the August letter of the Congregation of the Doctrine of the Faith, which said such baptisms are always invalid, has set some U.S. bishops assessing what to do about baptisms previously thought illicit but actually invalid.

The Archdiocese of Detroit issued somepastoral guidancefor anyone with concerns, that addressed many questions surrounding the issue.

“…theology is a science that studies what God has told us and, when it comes to sacraments, there must not only be the right intention by the minister but also the right ‘matter’ (material) and the right ‘form’ (words/gestures – such as pouring or immersion in water by the one saying the words),” the Archdiocese of Detroit stated on its website.

“As far as God ‘taking care of it,’ we can trust that God will assist those whose hearts are open to Him. However, we can have a much greater degree of confidence by strengthening ourselves with the sacraments He has entrusted to us,” the archdiocese added.

“Indeed, all the other sacraments increase and fortify sanctifying grace in the soul. One can see then, that sanctifying grace is a treasure of treasures and we should do everything we can to protect the integrity of the sacraments and stay very close to them – receiving them as often as possible.”