Ireland’s Devotion to Our Lady and the Rosary 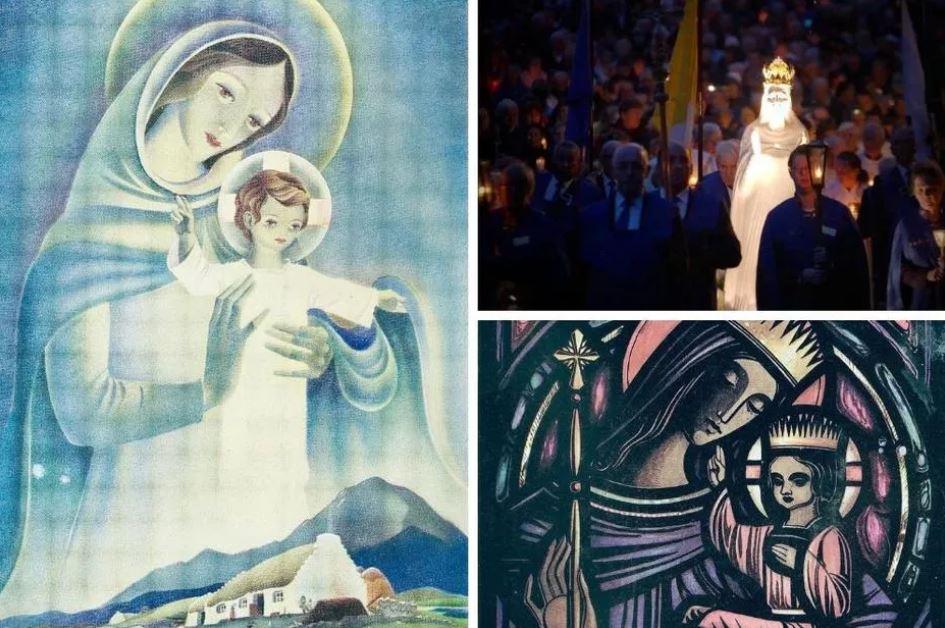 Ireland’s Devotion to Our Lady and the Rosary

Irish devotion to the Blessed Mother has a long legacy. In these present challenging times, faithful commitment to Our Lady is as needed as ever.

Archbishop Eamon Martin of Armagh and primate of All Ireland called for a “Family Rosary Crusade” against COVID-19 during the month of October.

This spring, Archbishop Eamon Martin led the consecration of Ireland and her people to the Immaculate Heart of Mary for protection from the coronavirus pandemic that swept into Europe in March. Archbishop Martin was joined by bishops, clergy and the faithful in the Act of Consecration, which began with the traditional recitation of the Angelus, followed by the Apostles’ Creed and the First Joyful Mystery of the Rosary.

And now, in this month of the Rosary, Our Lady is once again honored and evoked.

Irish people have maintained a devotion to Our Lady, and there are many signs of Marian devotion dating back centuries. Even now in a more secular era, the Angelus is still broadcast twice daily on national television. There are other compelling examples of Marian devotion, too.

A Tradition of Marian Prayers From Celtic Times

The devotion to Mary in Ireland goes back over 10 centuries. In 1862 a Litany to Mary from the eighth century was discovered in the Royal Irish Academy’s manuscript library. Pope Pius IX approved the litany for private use the same year. It is lyrical, poetic and devotional.

Most great of women

Queen of the Angels

Mistress of the Heavens

Woman full and replete with the Grace of the Holy Spirit

Blessed and most blessed

Mother of the Heavenly and earthly Church

Mother of love and indulgence

Mother of the golden light

Honor of the sky

Other examples of prayers to Our Lady in the monastic Celtic Church include the writings of Cú Chuimne, an Irish monk in Iona, and the poetry of Blathmac, who was martyred at Iona by pillaging Danes.

Our Lady Is Enshrined in the Irish Language

This same devotion to the Mother of God has also become an integral part of how the Irish speak to one another. The traditional greeting in the Irish language is Dia Duit, meaning “God be with you.” The reply to this greeting is Dia is Muire Duit, meaning “God and Mary be with you.” The salutation and greeting are used to this day, even among Irish speakers who are not overly religious. For example, the following is a typical greeting in modern-day Ireland:

Go mbeannaí Dia is Muire dhuit! “God and Mary’s blessing to you”

Mar chodlaigh Mac Dé.  “By the feet of the Son of God”

A Nation’s Devotion to the Rosary

The Rosary has a particular place in Irish life. Aidan Gallagher of EWTN Ireland said, “The Rosary has been described as the silver bullet preserving the faith of Catholic people in Ireland down the centuries. The Rosary has helped keep the Catholic faith very much alive here in Ireland. It is no surprise therefore, that, once more, the Church has called the nation to this prayer.”

He added, “A statue to Our Lady still stands at the main junction of many Irish villages. And on the highways and byways throughout the country, you will come across small individual shrines, tended and maintained by local faithful. There is a unique symbolism in the position of the Blessed Mother at a junction, where two roads diverge, and where her guidance helps keep us on the right track.”

There are many instances of the Rosary recited in Irish history and culture, from sports teams prior to matches, to Irish patriots before their execution, to everyday decades in family homes.

The Rosary in Penal Times

So integral to the Irish people has been the Rosary that the Irish can claim as part of their history a rosary of unique design that still holds the name referencing their historical struggles. The Penal Laws were sectarian measures enacted against Catholics in Britain and Ireland starting in 1695 that made it illegal to practice the Catholic faith and other oppressive measures. Many Irish Catholics were driven to emigration to the United States, taking their songs, music and devotion to the Rosary with them.

For those who stayed, their religion often took the form of Mass said by a fugitive priest at a Mass rock, a holy site in a safe remote location.

A feature in penal times was the Penal Rosary (An Paidrín Beag), comprising a ring, a decade of beads and a crucifix hidden in the hand or in a sleeve. The ring was moved across the thumb and four fingers to mark each decade. Simple symbols etched on the rosary were a rudimentary sign of a living faith in difficult times.

Mary also bestowed her particular favor on the Irish by appearing in the country in person. In August 1879, in the small Irish village of Knock in Mayo, the Virgin Mary, St. Joseph and St. John the Evangelist appeared to 15 villagers at the gable wall of the parish church. For an Irish people suffering despair through famine, poverty and emigration, this was a much-needed sign of hope, promising mercy, the Blessed Sacrament and the powerful intercession of the saints. Knock has since attracted millions of visitors from around the world, many seeking some relief and healing, including Pope St. John Paul II and Pope Francis and St. Teresa of Calcutta.

In 2019, the Church in Ireland acknowledged the healing at Knock 30 years ago of Marion Carroll who was gravely ill. During Mass on pilgrimage three decades ago, praying to Our Lady, she felt a “beautiful, magnificent feeling telling me that if the stretcher was opened, I could get up and walk.” She did get up and walked.

It was from Ireland, too, that one of the most famous proponents of the Rosary had come. Father Patrick Peyton built a vast media presence in the U.S. during the 1940s. He was born in 1909 in Ireland to a devout Catholic family in County Mayo, where the Rosary was part of their daily prayers and laid a strong foundation for his faith.

Father Peyton devoted his life to spreading the devotion to Mary and encouraging family prayer, especially the Rosary. He used radio, television and film, and 540 Rosary Rallies worldwide to accomplish his mission. Today, Father Peyton’s simple, devout messages that “The family that prays together stays together” and “A world at prayer is a world at peace” are known worldwide, as exemplified in a new documentary.

Father Raymond McCullagh, Catholic chaplain and lecturer at Ulster University and curate at Star of the Sea parish in Portstewart, Northern Ireland, said, “Marian devotion encourages all of us to grow in faith and discipleship. Mary was the first disciple of her Son, Jesus. She calls us to follow her example of fidelity and obedience. She always brings us closer to Christ and intercedes for us when we stray. She is also our mother and never stops looking out for us and offering guidance when we’re in trouble. My favorite Marian story is the Annunciation, portraying a very human Mary as a young girl asked to do great things for God. Her ‘Yes’ is our goal in life, believing that nothing is impossible to God.”

Rita McLaughlin, convener of the daily Rosary group at Star of the Sea parish, explained her lifelong devotion to the Rosary. “I grew up with the Rosary. We said it in our family every day. Our Lady asked people to say the Rosary. It means everything to me. We pray for everyone, especially at the current time during this pandemic. I believe it’s a great start to the day, saying the Rosary before Mass.”

McLaughlin added, “We still need it in our lives, and we need Our Lady to intercede for us. I feel that Our Lady is always there and is always helping us.”

‘Memento Mori’ and the Last Things...