Jesus’ Eternal, Eucharistic Question: ‘Who Do You Say That I Am?’ 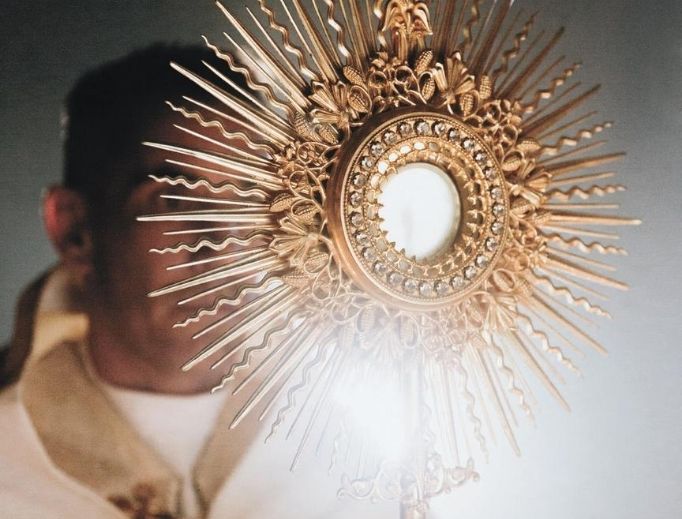 Jesus’ Eternal, Eucharistic Question: ‘Who Do You Say That I Am?’

COMMENTARY: It’s the central question of the Gospel, period, and it takes on greater significance in this unusual year.

But who doyousay I am?”

The Petrine confession of faith at Caesarea Philippi is the heart of the Gospel because it is anexistentialquestion. Jesus asks his apostles two questions. The first is a reporter’s question: “Who do people say I am?” The apostles can answer it by research: Some say A; others B; a few C.

The second question can’t be answered by a survey, except perhaps of one’s heart.

It’s not just informational. “Who doyousay that I am?” requires me to take a stand. It demandsmycommitment.

We perhaps often have an image of Jesus standing, dressed in his cloak, looking into Peter’s (or my) eye and asking, “Who doyousay that I am?” I want to propose a slightly different image.

In this very strange year, when there has been a massive, months-long moratorium on the Mass, Jesus’ question in 2020 is: “Who do you say that I am?”

We know that Catholic illiteracy about Jesus’ Real Presence in the Blessed Sacrament is high. The 2019 Pew survey suggested that only a third of American Catholics actually acknowledged that they believed the Eucharististhe Body and Blood of Jesus Christ (as opposed to some kind of “symbol” of Jesus).

Vatican II taught that the Eucharist is “the source and summit of the Christian life” (Lumen Gentium,11). It means that all the other sacraments exist for and lead to the Eucharist. The Christian life is centered there. There is no more real presence of Jesus Christ in the world today than the Eucharist. And there will not be anymore realpresence of Jesus in this world until the Last Day, when, coming Body and Blood, Soul and Divinity in Person, there will be no more need for the sacraments, for “we will see him as he is” (1 John 3:2b,Lumen Gentium,48).

The sacraments are not “optional extras” to Catholicism. They are not just “visible reminders” to accompany act-out rituals or “visual aids” to remind us of God and his love. They are “efficacious signs,” i.e., they are merely observable actions that remind us of something that God is doing independently of them in us. The “sacraments effect what they signify” (Catechism of the Catholic Church,1127). God wants to encounter us in the whole reality of who we are: body and soul. But being bodily beings means we face certain limits, including space and time. I live in a certain place in a certain moment in history.

By becoming a real human being, Jesus also assumed what being human implies, i.e., being limited by space and by time. He lived in a certain place (Israel) in a certain moment of history (ancient times, about 2,000 years ago).

Only by becomingreally present —physically and spiritually — could Jesus connect with me through time. But that’s the dilemma. How do I connect Jesus of first-century Israel and Josh of 21st-century America?

Humanly impossible — but not impossible for God. So that God would “be with us all days, until the end of the world” (Matthew 28:20), he became present in the Eucharist.

But the Eucharist is not a “bread God.” It’s not Jesus “hiding out” in bread. It is not fitting that a person, which is a greater being than a thing, should reduce to a thing. Either what was Jesus becomes bread (basically, the idea of Eucharist as a mere symbol)orwhat was bread becomes Jesus (the Catholic doctrine of transubstantiation).

The Eucharist is not, therefore, something superfluous. There is no fuller presence of Jesus in this world this side of the Last Day.

Why am I making such a point out of this? Because our Mass moratorium over the past few months enkindled two dangerous threats.

On the one hand, in the absence of sacramental Communion, we were urged to make acts of “spiritual communion” — and so we should. But “spiritual communion” is something incomplete (“Comeat leastspiritually into my heart”). It’s a temporary palliative, not a substitute. It certainly is not “as good as” or “better” than sacramental Communion — although I fear that our gnostic-tinged society somehow thinks it might be.

On the other hand, various writers tried to downplay the absence of the Mass by turning the Eucharist into “one presence among many.” God is present in reading the Bible. He’s present when “two or three gather” to pray. He’s present in other liturgies (e.g., the Liturgy of the Hours). He’s present in service to other people. So why do you have this “hang-up,” this “fixation” (both terms I’ve seen in print) about the Eucharist?

Well, yes, God is present in many ways in our lives. But there is no way and nowhere that he is more really and actually present — Body and Blood, Soul and Divinity — than the Eucharist. At least not before the Last Day.

Catholics who felt there was just “something not right” about the wholesale abandonment of the Mass for four-plus months had a healthy sense of what it means to be Catholic.

This Sunday, do we reallybelievewhat our theology claims? Because the question this Sunday asks in the Gospel demands its answer at the Consecration: “Butyou, who do you say I am?”