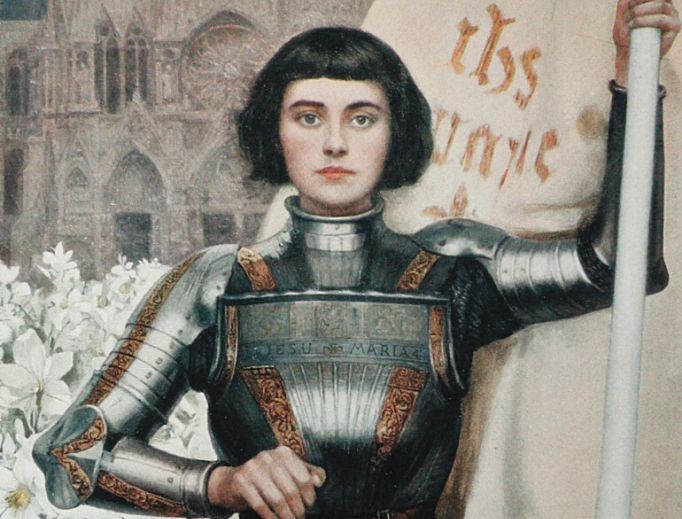 As we celebrate the first centenary of the canonization of the Maid of Orléans in the middle of an unprecedented crisis in many countries, her life recalls that faith can defeat all kinds of adversities.

While proclaiming Joan of Arc a saint, at the end of a long canonical process, May 16, 1920, Pope Benedict XV claimed that her life was “a proof of the existence of God.”

As her exploits and extraordinary heroic virtues arouse the fascination of people from all sensitivities, even far from the Christian faith, the Pope highlighted that all those who had tried to explain her life and work without God “got lost in a labyrinth of inextricable mazes.” Indeed, whereas “France is rightly proud of Joan, the Holy Church triumphs within her, too,” he said.

This vibrant tribute to the one that freed France from the British during the Hundred Years’ War also sounded like a gentle reminder addressed to the numerous anticlerical militants of that time who celebrated her as a poor commoner victim of the Church authorities and appropriated her memory as their own. But beyond any controversy, it illustrated the universality of Joan’s legacy, of which countless people were still drawing inspiration, five centuries after her death in 1431, at the age of 19.

Although it took several centuries for her personal sanctity to be officially recognized by the Church, the iniquity of the trial that led to her execution was rapidly attested by a second trial, initiated by Pope Callixtus III in 1455, and which fully rehabilitated her.

In addition, to strengthen the Maid of Orléans’ image as a national heroine, the report of her trials and her dialogue with her prosecutors revealed, more than anything else, the greatness of her soul, the mightiness of her life of faith and her true holiness. It is precisely the reading of these reports that led the then-bishop of Orléans, Bishop Félix Dupanloup, to vigorously militate, from the 1850s, in favor of the recognition of Joan’s religious virtues. He initiated her cause for canonization in 1869, a process supported both by the city and the Diocese of Orléans, which came to a successful end in 1909 only under the pontificate of Pope Pius X.

Joan of Arc was canonized a decade later, in the aftermath of World War I, during which she became the subject of a great popular devotion, especially in the trenches. She was also proclaimed — together with Thérèse of Lisieux — after the Virgin Mary the secondary patron saint of France.

Very few historical figures can boast of having inspired as much literary, musical or cinematic works as Joan of Arc.

The admiration that the completeness and purity of her soul arouse worldwide transcends all ideological splits, as evidenced by the various political recuperations to which she has been subjected, from her time to the present day.

“One of the reasons why Joan of Arc is so popular is because she embodies a figure of resistance and national unity, in virtue of what she’s been through,” Father Christophe Chatillon, rector of Orléans Cathedral, where the saint attended Mass on May 2, 1429, while in the city to lift the siege against the British army, told the Register.

“In a very divided world, she has become a much-needed symbol of a recovered unity,” he said, highlighting the fact that although she was a woman, her simple faith made her become one of the greatest chiefs of war of her time.

According to him, the special impact she has always had on youth is explained by the great coherence between her faith and acts, which makes her a credible model for young generations in quest of a cause. “They have the model of a young peasant girl whose holiness was built simply within her family life, her daily work, a girl who was committed at 17 and died at 19, after having seen her mission through by liberating Orléans and by allowing Dauphin Charles VII to be king of France,” Father Chatillon said, revealing Joan’s impact on his vocation, as her testimony helped him go through difficult times during his childhood and adolescence in Orléans. “Her legacy can help us nowadays,” the priest said.

“She can help us perseverate in the adversity, and it is consistent with what our world, countries and Church are going through.”

Joan’s holiness is evidenced by every aspect of her life, including by her role as a war hero. Indeed, her historiography mentions the mercy and benevolence she showed on the battlefield, notably toward her wounded enemies.

It is this genuine humanity in all its fullness that Christiane Rancé, a French novelist who has dedicated a significant part of her writing to the life and work of the greatest Christian saints, to whom she even dedicated a whole Dictionnaire amoureux (“Love Dictionary”), cherishes the most. “It is not so much the Warrior Virgin that I love in Joan, although I admire everything about her,” she told the Register.

“Nothing moves me more than her profound humanity in her extreme solitude.”

“In tears, splendid and trembling in her night before the pyre, she remained incorruptibly faithful to the vision she had of a possible Kingdom of God on this earth, and toward which she rushed with all her innocence, and for which she accepted to die,” she continued.

Joan of Arc’s holiness, according to Rancé, who professes a particular devotion to her, is made unquestionable by the “entirety of her faith, her incorruptible trust and her fervor in God.” It is enough, she added, “to follow the curve of her life in the skies of Europe, during the two decades — even less, 19 short years — of her existence to bow before the obviousness of her holiness.”

As all public Masses and celebrations are still suspended in France until further notice, the large program of commemorations originally planned for the 100th anniversary of the Maid of Orléans’ canonization has been significantly disrupted, and most of the biggest events were canceled or postponed to next fall.

Yet the large community of devotees from the 14 dioceses involved in Joan’s history has no intention to give up the idea of honoring her glorious memory during the traditional “Johannique” month, through a series of creative initiatives, including live sessions with the testimonies of prominent personalities on YouTube.

On May 8, for the commemoration of the liberation of Orléans by Joan of Arc, a giant mosaic fresco representing the saint, made of around 2,000 portraits of young people aged between 8 and 25 years old, was exhibited on the narthex of Orléans Cathedral.

Courtesy of the Diocese of Orléans

“We will try to liturgically replace and highlight the festivities that were canceled or postponed through private celebrations at the cathedral presided over by bishop of Orléans Jacques Blaquart, using every possible means to have them broadcast on social media,” Father Chatillon said, mentioning in particular the solemn Mass for the centenary of the canonization, which was planned on May 17.

The purpose is for the diocese to hold as many celebrations as possible during the “Johannique Month” of May, in order to show that holiness cannot be subject to any sort of contingent constraints.

“We want to express the fact that Joan is not a woman of the past but a saint of the present time who is eternally young and can help us face all kind of tribulations.”

How a Solanus Casey documentary, a...