Joe Biden and JFK: How Catholicism Played a Role in the Presidential Bids of 1960 and 2020 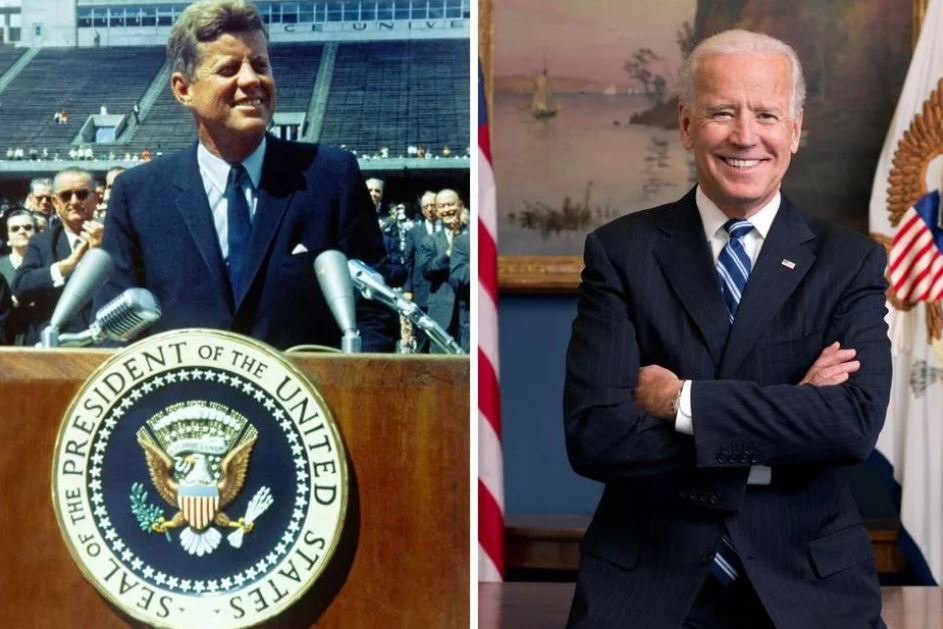 Joe Biden and JFK: How Catholicism Played a Role in the Presidential Bids of 1960 and 2020

John F. Kennedy’s game-changing election 60 years ago differs starkly from Joe Biden’s campaign this year, but the first Catholic president paved the way for the likely next.

WASHINGTON — When Joe Biden addressed the nation on Nov. 7, following the media’s declaration of his victory as the second Catholic to be elected president of the United States, he punctuated his remarks with the language of faith.

“The Bible tells us that to everything there is a season — a time to build, a time to reap, a time to sow, and a time to heal,” said Biden, echoing his campaign theme of national reconciliation.

The celebratory remarks offered further evidence that Biden wanted to be seen as a man of faith, building on the theme of several campaign videos that sought to reassure voters in battleground states that his policies aligned with Catholic social teaching.

“Look, I have the great advantage of my faith, the Catholic social doctrine, and my political views coincide,” said Biden in one campaign video tweeted on Nov. 2 from his official account, while news outlets showed the candidate attending Mass at his Delaware parish on Election Day.

Biden was silent, however, about his departure from Church teaching on abortion, religious freedom and marriage. And exit polls showed his low-key affirmation of cultural Catholicism in the ads produced a mixed result, forestalling an expected “blue wave” of Democrat victories in battleground states.

Catholic voters in Pennsylvania, the state of his birth, broke for Trump by 57%. AP VoteCast reported a similar figure for the overall white Catholic vote, showing 57% backed Trump and 42% backed Biden.

Experts say that’s not the only contrast between two starkly different elections that span more than half a century.

“Kennedy distanced himself from explicitly Catholic issues and concerns, and, in his famous speech to Protestant ministers in Houston, he stated that if his duties as president ever came into conflict with his religious obligations that he would resign,” Bradley Lewis, a political philosopher at The Catholic University of America, told the Register.

During his Sept. 12, 1960, speech before a group of Protestant ministers in the Greater Houston Ministerial Association, Kennedy said he believed “in an America where the separation of church and state is absolute, where no Catholic prelate would tell the president (should he be Catholic) how to act.”

Kennedy signaled his political independence from his Church by opposing efforts to establish diplomatic relations with the Holy See and secure government aid to Catholic schools.

Meanwhile, his overall platform skewed “conservative,” said Lewis. The candidate defended the nation’s capitalist system and called for a robustly anti-communist foreign policy, a position that resonated with Church leaders alarmed at the rise of totalitarian regimes and religious persecution in the Soviet bloc and China.

In the U.S., Catholics worried about their own religious freedom, with the memory of bigoted attacks on immigrants and on the 1928 Democratic presidential nominee Al Smith’s Catholic religion not yet faded. And Kennedy repudiated attempts to impose a “religious test” on office holders in his speech, but otherwise had nothing to say on social issues that fuel political polarization today.

“The ‘culture war’ that we often talk about now didn’t really exist then,” said Lewis.

Yet Kennedy’s promise to isolate his religious beliefs from his presidential policies would have a powerful impact on America’s culture wars over the next half-century.

A self-identified “Catholic” lawmaker was now justified in separating “private beliefs from his or her public duties,” said Archbishop Charles Chaput of Philadelphia in a 2010 speech before Protestant ministers in Houston that traced the long-term impact of the 1960 election on U.S. politics.

“And it set the national interest over and against outside religious pressures or dictates.”

Despite the fact that Kennedy had strongly signaled that his presidency would not be shaped by his faith, he was able to win the White House only because of the breadth of his support among his Catholic co-religionists.

Kennedy won the presidential election with a slim majority of the popular vote and more than 70% of the Catholic vote, marking a sea change in U.S. politics.

“JFK was the first man elected president who did not carry the majority of the Protestant vote,” George Marlin, the author of The American Catholic Voter: 200 Years of Political Impact, told the Register.

Kennedy’s achievement revealed that the Catholic vote could make the difference between electoral victory and defeat, and for the past six decades pollsters have traced the shifting partisan loyalties of this voting bloc. But Marlin and other experts also note that cradle Catholics no longer vote in lockstep.

“The only Catholics that matter [in polling] are churchgoing Catholics,” said Marlin, and they care about a candidate’s views on abortion and religious freedom.

That’s why political campaigns have become more focused on battleground states in the Rust Belt that include a small but significant portion of committed Catholics, he said.

Historians say the fragmentation of the Catholic vote began after the social-change movements of the 1970s and 1980s roiled the nation and the Democratic Party.

Those developments paralleled and shaped Biden’s own political trajectory. In 1972, he won an uphill contest for a Delaware Senate seat. And in a 1974 Timemagazine interview, he presented himself as liberal on civil-rights issues and social entitlements, while registering his opposition to abortion.

But by 1980, his party’s platform had endorsed unfettered legal abortion, even as Ronald Reagan, a onetime Democrat, campaigned against unrestricted abortion in his successful bid for president, and the GOP platform backed a constitutional amendment banning legal abortion.

Biden slowly adapted to his party’s embrace of Roe v. Wade, describing himself as a “middle of the road” Democrat who backed Roe, but opposed late-term abortions and supported restrictions on federal funding of abortions.

His most significant move on abortion occurred during the lead-up to the 2020 election, when he reversed his support for the Hyde Amendment, after his future running mate, Sen. Kamala Harris, D-Calif., then another Democratic presidential contender, challenged his position.

Charting Biden’s trajectory on life issues, Russell Shaw, the Catholic author and a former spokesman for the U.S. bishops, argued that the hierarchy implicitly played a role in the former senator and vice president’s evolution on abortion. Church leaders failed to effectively address the tortured logic of a politician who was comfortable separating his faith from public policy.

“I see a straight line from Kennedy in 1960 to Biden in 2020,” Shaw told the Register. “Kennedy told voters, ‘Don’t worry: If I am elected president, I won’t let my faith get in the way of my duties as president.’”

At the time, the U.S. bishops “were so overwhelmed by his election they never really challenged him on anything,” Shaw said.

“Now, in 2020, we have Biden, who presents himself as a good Catholic who goes to Mass, and is in favor of legal abortion.”

Shaw expressed regret that the bishops’ response has been muted throughout the campaign cycle, aside from the release of their traditional election-year statement, which identifies abortion as the “preeminent” issue.

The bishops’ silence has generated confusion among the faithful, Shaw said, while allowing dissenting voices within the Church more leeway to advance their own agenda.

“There is a symbiotic relationship” between Catholic figures who dispute Church teaching on life or “LGBT” issues and politicians who share their mindset, he said. “They are in the same territory, giving legitimation to questionable positions.”

In September, Cardinal Joseph Tobin of Newark, New Jersey, suggested that “a person in good conscience could vote for Mr. Biden.”

Cardinal Tobin later clarified that his comment, made at a public forum, did not constitute an endorsement of Biden.

“There are serious reasons to not consider either [political] party as being representative of the Catholic tradition,” the cardinal said later, but “the problem is we have to vote. We should vote.”

The cardinal’s remarks reflected the ongoing tensions within the U.S. bishops’ conference and among active Catholic voters, with serious concerns in particular both about Biden’s support for legal abortion and expanded rights for “LGBT” Americans and about Trump’s governance and clampdown on immigration.

Since 2012, Church leaders have become more vocal about the threat same-sex civil marriage and sexual- and gender-identity protections pose to the free-exercise rights of religious believers and institutions that adhere to Catholic teaching on sexual ethics and marriage.

And during the Obama-Biden administration, the U.S. bishops also filed multiple legal challenges to the 2012 Health and Human Services’ contraceptive mandate on religious-freedom grounds.

But Biden’s defenders say he has shown some sympathy for Catholic institutions facing pressure to accommodate new social norms.

After the Obama administration approved the Health and Human Services’ mandate, which required Catholic employers to provide contraceptives, including abortifacients, in their health plans, Biden tried to narrow the religious exemption; although after the Little Sisters of the Poor won their second Supreme Court case defending their conscience rights, the former vice president said he would work to restore the original “contraception mandate.”

And when the U.S. Senate prepared for Amy Coney Barrett’s confirmation hearings, Biden said her religion should not be subject to attack, though he did not rebuke activists and media outlets that targeted her faith.

“Biden has [made clear] that hostility to religion and, at times, to people of faith themselves is not only politically disastrous but also fundamentally illiberal,” said Washington Post columnist E.J. Dionne in an October 2020 essay dissecting the religious dynamics of the presidential contest.

But Robert Royal, the editor of The Catholic Thing, pinpointed a striking difference between Biden’s approach and JFK’s repudiation of religious intolerance.

Rather, the 2020 presidential candidate “is trying to defuse Catholic resistance to the cultural revolution” that has swept aside moral absolutes and reframed conscience protections as a “license to discriminate.” To bolster this claim, Royal noted that Biden had recently identified transgender rights as “the most important civil right” of this generation and vowed to pass the Equality Act, which will dramatically expand protections for “LGBT” Americans without the benefit of federal religious-freedom protections.

How Would Biden Govern?

Yet Royal questioned whether the presumptive president-elect would continue to skew left in the White House. Lawmakers and political analysts note that the GOP’s likely retention of the Senate could prompt Biden to retain the more middle-of-the road approach that characterized most of his earlier political career.

“The honeymoon with his party’s progressive base was never going to last long,” said Bobby Jindal, the former Republican governor of Louisiana and candidate for the 2016 Republican presidential nomination, in a Nov. 9 column for The Wall Street Journal.

As president, “Biden needs a Republican Senate majority to serve as a foil. It will give him someone to blame when he proves unable to deliver on left-wing environmental, tax and health-care policies.”

Others agree that Biden likely would be inclined to reset his party’s agenda, at least to some extent.

“Joe always steers the course of the middle of the river of his party,” former Pennsylvania Sen. Rick Santorum observed during a post-election interview with the Napa Institute. While the Democrats’ ideological framework has shifted over the course of Biden’s political career, he has “navigated to the center to stay safe.”

“Now there’s an opportunity to navigate the party in a different direction,” added Santorum, a Catholic who made a bid for the Republican presidential nomination in 2016. “We’ll see if he takes advantage of it.”

Advent Reflections 2020 – First Week of Advent: God is Our Father