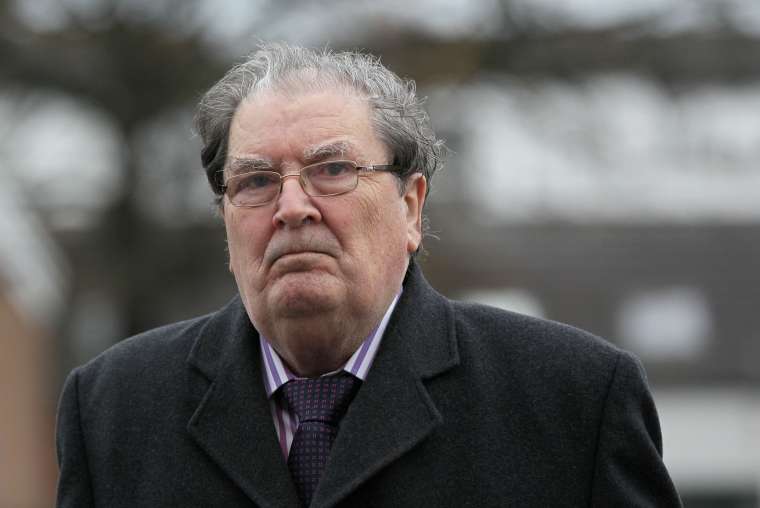 Retired politician and Nobel laureate John Hume, a major leader in the effort to secure peace in Northern Ireland, died Monday at the age of 83. Many leaders in the region praised his success in responding to one of Europe’s longstanding conflicts.

“I was leader of a great team of people, all of whom have been totally committed to peace and stability on our streets, and all of whom have done everything in their power, as I’ve said repeatedly, have spilt their sweat, not their blood, to bring about peace and stability on our streets,” Hume said in his 2001 speech in which he resigned as leader of the heavily Catholic and nationalist Social Democratic and Labour Party.

In 1998 Hume and David Trimble, leader of the strongly Protestant Ulster Unionist Party, were joinly awarded the Nobel Peace Prize for their work for a peaceful resolution to the conflict in Northern Ireland, secured under the Good Friday Agreement.

“Too many lives have already been lost in Ireland in the pursuit of political goals. Bloodshed for political change prevents the only change that truly matter: in the human heart,” Hume said in his Nobel Lecture in Oslo in 1998. “We must now shape a future of change that will be truly radical and that will offer a focus for real unity of purpose: harnessing new forces of idealism and commitment for the benefit of Ireland and all its people.”

Trimble, a former first minister of Northern Ireland, credited the success of the Good Friday Agreement because of its architecture and process for making right decisions. He praised Hume’s trust in the effectiveness of a bottom-up approach.

He recounted that the laureates and their allies came together to celebrate after the Nobel Prize ceremonies.

“When the ceremony was over and we retired to the hotel, we found that hotel was assuming that the one party would be in one room and the other party would be another room,” Trimble told the PA news agency.

“We said no, we’re going to relax and celebrate the achievement together with all our companions that had come with each of the parties there.”

In prior decades, Hume’s outreach to paramilitary groups and to politicians could be deeply controversial, especially his outreach to the illegal Irish Republican Army’s political wing Sinn Fein in the 1980s. He also sought to gain allies among American politicians and Irish-American leaders to move towards peace in a conflict that had killed some 3,000 people.

Hume’s 1994 meeting with then-Taoiseach Albert Reynolds and Gerry Adams of Sinn Fein led to a key declaration committing to democratic, peaceful means to resolve the conflict in Northern Ireland.

Though a 1994 ceasefire broke down in 1997, a second ceasefire begun that same year led to multi-party talks at Stormont, the Parliament of Northern Ireland. The talks were chaired by U.S. Sen. George Mitchell (D-New Mexico) and led to the Good Friday Agreement of April 10, 1998.

Conflict in Northern Ireland dates back centuries, but its 20th century framework was set in 1921-22 with a treaty that partitioned the island of Ireland into the six counties of Northern Ireland and the 26 counties of the Irish Free State. Irish nationalists were themselves riven by bitter civil war after the treaty and the partitioning, though the 26 counties later became fully independent in the late 1940s as the Republic of Ireland.

In Northern Ireland, differences between nationalists who backed a unified Ireland and unionists who supported the United Kingdom split strongly along religious lines, and Protestants tended occupy a place of social and economic privilege. In the 1960s, Catholics began to push strongly for civil rights, voting rights, police reform, and an end to discrimination. Tensions turned violent in 1968, after civil rights demonstrators faced violent opposition from their opponents, police inaction, and even violence from the violence.

The period known as The Troubles featured riots, violent attacks, bombings and retaliation from Protestant and Catholic paramilitary groups, as well as involvement from the Royal Ulster Constabulary police, intervention from the British military, and mass internment of civilians.

He had entered the seminary at Maynooth but did not pursue the Catholic priesthood. He became a French teacher and married his wife Patricia in 1960. He founded Derry’s Credit Union and at the age of 26 became national president of the Irish Credit Union Movement, RTE News reports.

Benedict XVI in 2012 named him a Knight Commander of the Pontifical Equestrian Order of St Gregory the Great, recognizing “his outstanding services to Catholic social teaching in the area of peace.”

In his later years he suffered from dementia and memory problems. He died Aug. 3 after a brief illness at a nursing home in the Northern Ireland city of Derry, also known as Londonderry.

“It seems particularly apt for these strange and fearful days to remember the phrase that gave hope to John and so many of us through dark times: We shall overcome,” said his family in a statement about Hume’s death.

Bishop Donal McKeown of Derry said Hume was “one of the greatest peacemakers and champions of social justice of our time.”

“He dedicated his life to the welfare of this community, at no small cost to himself. His name became a byword for dedication to the cause of peace, whatever the obstacles or criticisms,” he continued. “His first- hand experience of injustice and violence and his broad European vision emboldened him to persevere in building bridges and friendships.”

Noting Hume’s seminary discernment, McKeown said Hume “always retained that strong Christian sense of being called to be a peacemaker.”

Archbishop Eamon Martin of Armagh, who comes from Derry, said he was “hugely influenced” by Hume.

“For me, like many other pupils of Saint Columb’s College, John Hume was considered one of our heroes and role models. When I went to study for the priesthood at Maynooth I was happy to know that he too had once been a seminarian for the Diocese of Derry,” the bishop said Aug. 3. “But John’s vocation was to serve God and his community as a layman, and he totally devoted his energies to that vocation – to relieving poverty, challenging injustice and providing decent living conditions for all.”

“Later, as a priest working in Derry, I came to know John as a man whose convictions were rooted in a deep faith, in prayer and practical Christianity,” he continued. “John put Catholic Social Teaching into practice – sometimes at great personal cost and risk – working ceaselessly for a process of reconciliation through which the dignity of every human person is recognised and upheld.”

SDLP leader Colum Eastwood praised Hume, saying: “His life’s work brought to an end the seemingly intractable historical arc of bitter conflict between the neighboring islands of Britain and Ireland.” In reflecting on Hume’s work, he said, “never has the beatitude rung truer – blessed be the peacemakers”.

The Republic of Ireland’s Taoiseach Micheal Martin said of Hume, “During the darkest days of paramilitary terrorism and sectarian strife, he kept hope alive. And with patience, resilience and unswerving commitment, he triumphed and delivered a victory for peace.”

“His decision to meet with me in September 1986, following an invitation from Fr. Alex Reid, was a breakthrough moment in Irish politics,” said Adams. “John’s agreement to examine the potential of building an alternative to conflict was the mark of a political leader genuinely prepared to look at the bigger picture and to put the wider interests of society above narrow party politics.”

Arlene Foster, the Northern Ireland’s first minister and leader of the Democratic Unionist Party, said Hume was a “giant in Irish nationalism.”

“John left his unique mark in the House of Commons, Brussels and Washington. In our darkest days he recognized that violence was the wrong path and worked steadfastly to promote democratic politics,” she said.

Former U.K. prime minister Tony Blair, who also worked on the Good Friday Agreement, said Hume was “a political titan; a visionary who refused to believe the future had to be the same as the past.”

“His contribution to peace in Northern Ireland was epic and he will rightly be remembered for it. He was insistent it was possible, tireless in pursuit of it and endlessly creative in seeking ways of making it happen,” said Blair. “Beyond that, he was a remarkable combination of an open mind to the world and practical politics.”

Hume’s funeral Mass is scheduled to take place at the Cathedral of Saint Eugene in Derry at 11:30 a.m. Aug. 5.